We arrived in Rippon around lunch time so after a scone and coffee at a lovely cafe just down the road opposite - I had a blackberry and apple scone and Paul had a Wenslydale cheese scone - both delicious, we entered the cathedral. 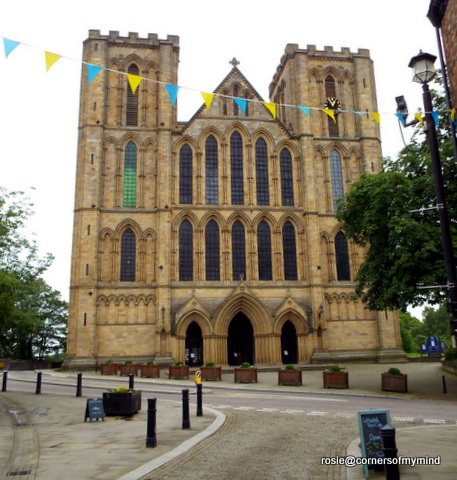 Ripon Cathedral has a history dating back to the 7th century and was founded by St Wilfred in the year 672, it has been rebuilt several times since.  The Saxon Crypt is thought to be the oldest in the country. 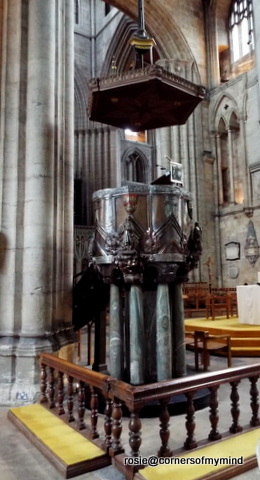 The pulpit designed by Henry Wilson in 1913 in a mixture of the  Arts and Crafts and Art Nouveau styles. 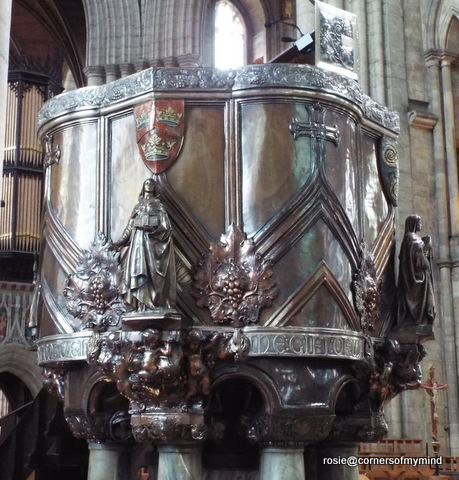 It is made of bronze and stands on marble columns.  The figures are of four Anglo-Saxon Saints, Cuthbert, Etheldreda, Hilda and Chad.  It was rather impressive. 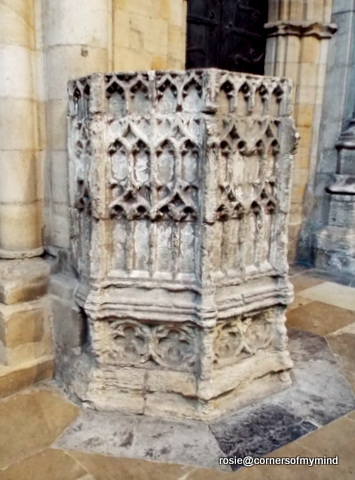 Above the original stone pulpit which used to be on top of the medieval screen below. 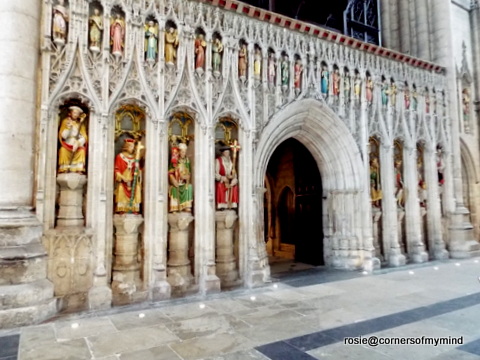 The stone screen above dates from the 15th century although the figures are modern, dating from about 1947 and depict local people of Ripon who have been influential both in the town and church. 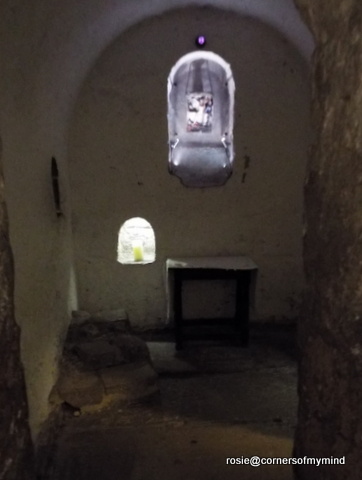 The Saxon Crypt is all that survives of the original church and it is where relics brought back from Rome by St Wilfred were housed. 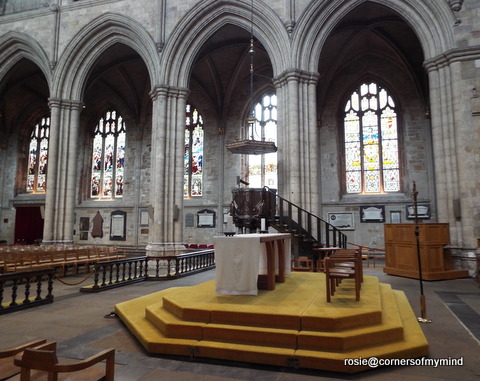 View across the nave - There was a large school party being guided around the church so we set off in the opposite direction but by doing this I'm afraid I missed one or two things and didn't get back to them later. 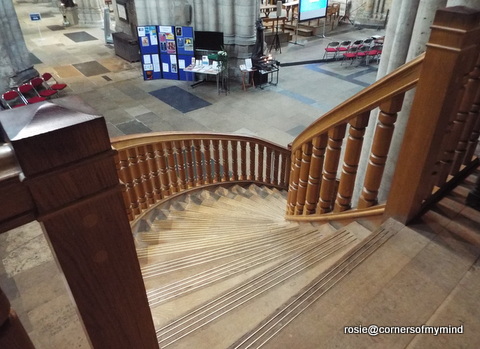 The stairs leading up to the Cathedral's library. 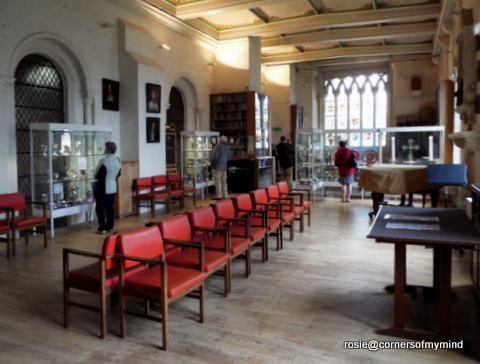 The library is a large, light and airy room built in the 14th century.  It houses many ancient books plus displays of silver communion vessels too.  Also on display is the Ripon Jewel, a gold disc which dates from the time of St Wilfred.  It was found near the cathedral in 1976. 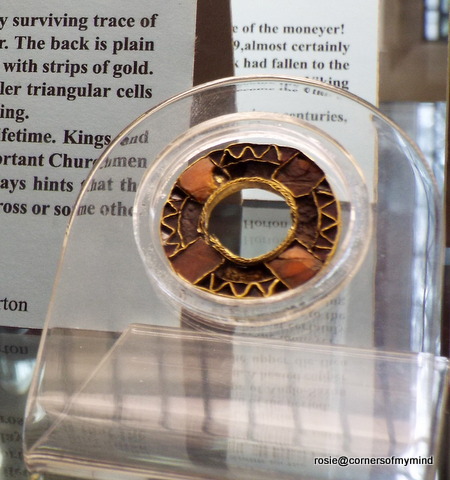 The jewel was quite fascinating.  It is small, about 29mm in diameter.  On the back it is plain gold and on the front it has settings for jewels.  There are pieces of amber still in place but other gems have been lost.  It may have been used as a brooch or as an embellishment for a relic casket. 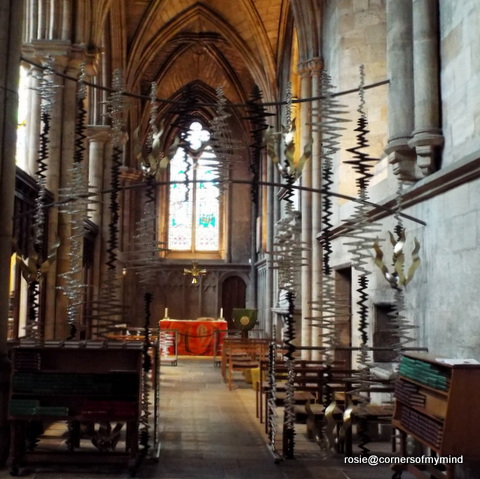 The Holy Spirit Chapel with metalwork designed in the 1970s by Leslie Durbin who also designed the first £1 coins. 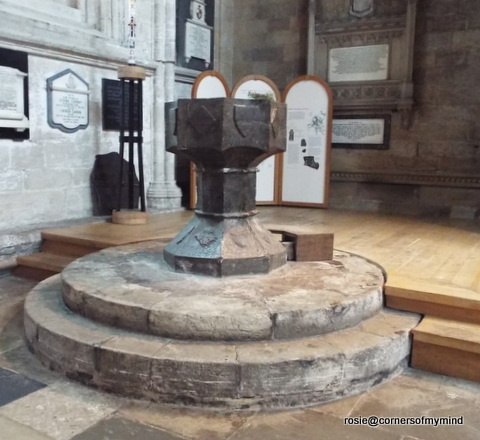 The Font. is part Tudor and the rest Victorian. 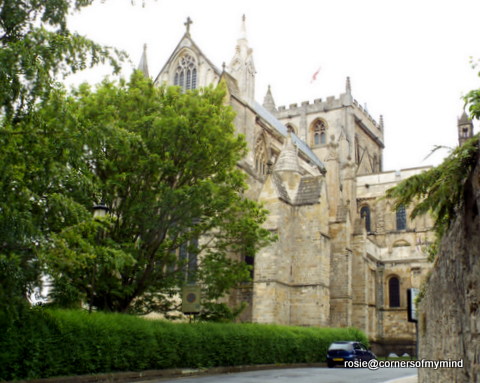 Two things of note about the cathedral are its literary connections.  The father of Charles Dodgson was a member of the clergy team at the Cathedral in the 1860s.  Charles Dodgson wrote as Lewis Carroll and it is said that the misericord carvings in the Quire influenced his writing of 'Alice in Wonderland.'

The poet Wilfred Owen spent his 25th birthday in March 1918 visiting Ripon Cathedral. Just a few months later he was killed in action at Sambre-Oise Canal in France just days before the end of the war. 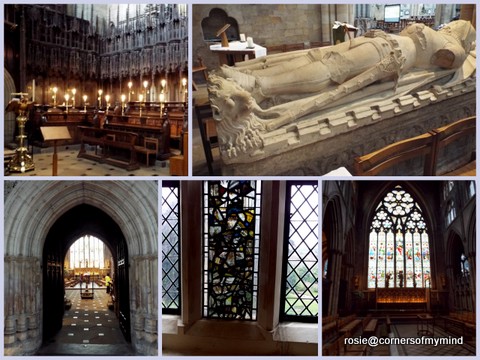 Next we'll visit the workhouse and try out a Ripon speciality.
Posted by Rosie at 12:30 pm