The Old Man of Mow

The Old Man of Mow can be found beside the path of the Gritstone Trail almost at the summit of the hill in the village of Mow Cop. 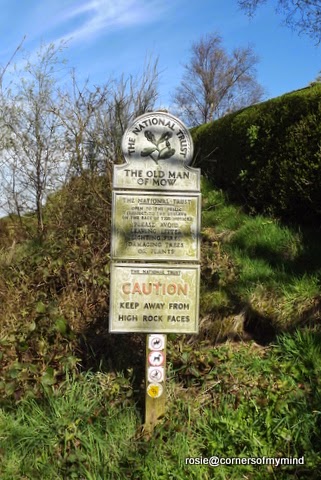 The Gritstone Trail is a long distance walk of 15 kilometres (9.3miles) which starts at Timbersbrook near Congleton in Cheshire and finishes at Kidsgrove in Staffordshire. The route passes many historical landmarks and features of the area's industrial past including ancient paths, Roman roads, canals and railways. On its way from Cheshire into Staffordshire it takes in Lyme Park, Sponds Hill, Tegg's Nose Country Park, Croker Hill and Mow Cop, it ends at Kidsgove Station which is close to the Harecastle Tunnel on the Trent and Mersey Canal. 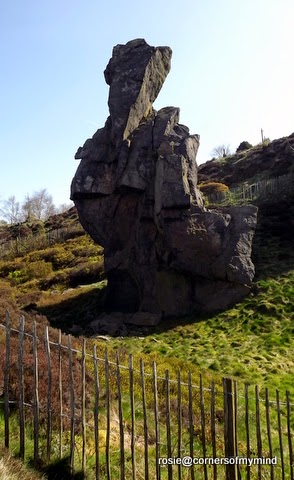 The Old Man of Mow is a 20 foot pillar of gritstone which was left standing after the stone around it had been quarried away. 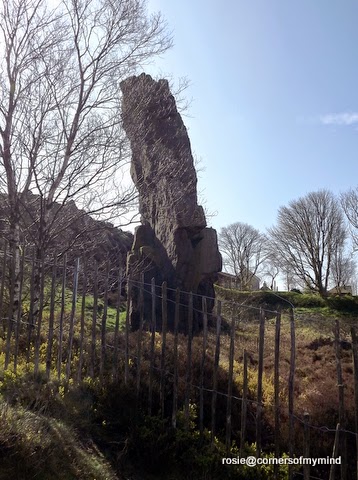 Another stunning feature along the gritstone trail and also at Mow Cop is, of course, the folly known locally as the castle, which was built by Squire Wilbraham of nearby Rhode Hall.  I've featured this ruin on a couple of previous blog posts so I hope you don't mind me including it again.  According to Arthur Mee's entry in The King's England for Staffordshire - Mow Cop "It's splendid hill, nearly 1100 feet above sea level, with magnificent views far in Wales, belongs to us all, for it has been given to the National Trust.  It is marred by a mock ruin of the 18th century...."

What do you think? Is the hill's outcrop marred or enhanced by the folly?  It can be seen for miles around and is such a recognisable landmark. 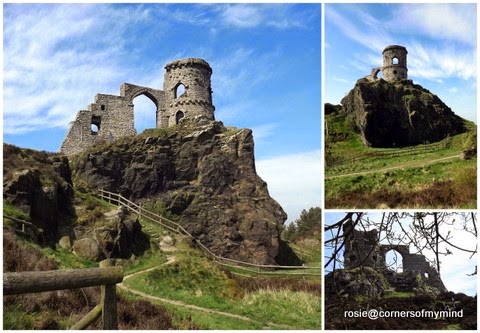 Mow Cop is also known as the birthplace of Primitive Methodism.  The present church built in 1862 is on the site of the first open air meeting, organised by Hugh Bourne,  which took place on 31st May 1807 when 2000 people from as far away as Macclesfield and Warrington attended.  The meeting lasted for 14 hours.  Here is a link to more information. 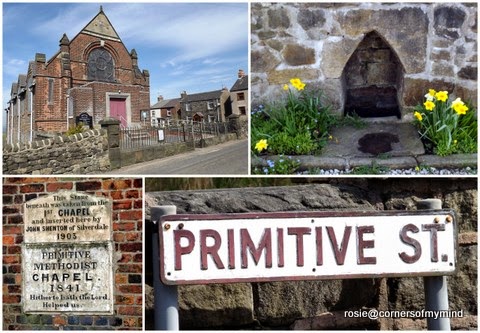 There are several wells around the village including the Squire's Well and the Parson's Well.  These were built almost as shrines to celebrate and give thanks for the abundance of fresh water and in the past, although no longer,  well dressings took place here as they still do in many Derbyshire towns and villages.  I saw three of these wells as we were walking around the village but apparently there are more to be found.
Posted by Rosie at 9:05 am 34 comments:

A Walk in the Manifold Valley

On a beautifully sunny morning last week we decided to take a walk in the Manifold Valley.  It seems ages since we were last there.  We parked as usual near Wetton Mill and set out on the stretch of the walk which goes towards Thor's Cave - following the path which was once the old railway line that brought ramblers and tourists into the valley. 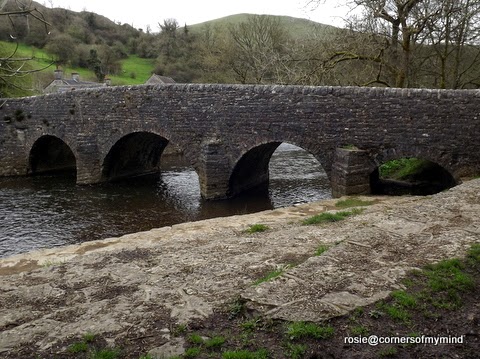 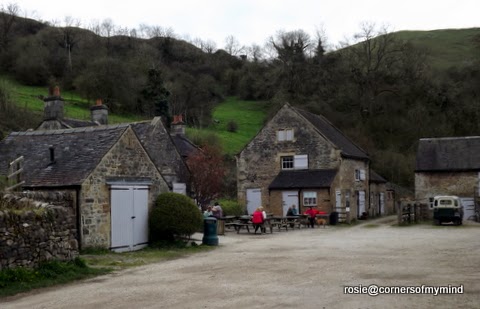 We walked along the path until we could see Thor's Cave in the distance. 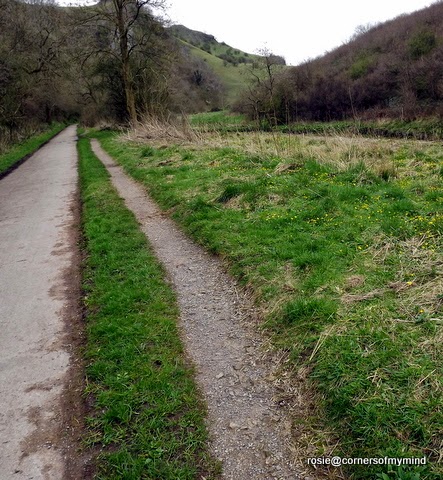 We could hear and see Peregrine Falcons on the ridge opposite the cave as we walked.  There were also Buzzards whirling overhead too and the shrill call of pheasants. 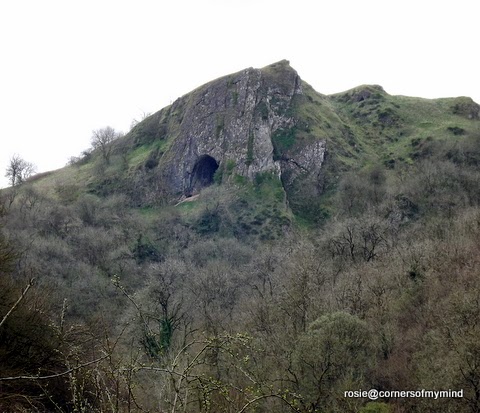 There were lots of lovely wildflowers in the meadows and woodlands and on the river banks. 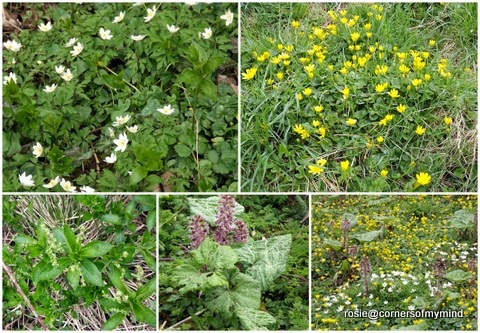 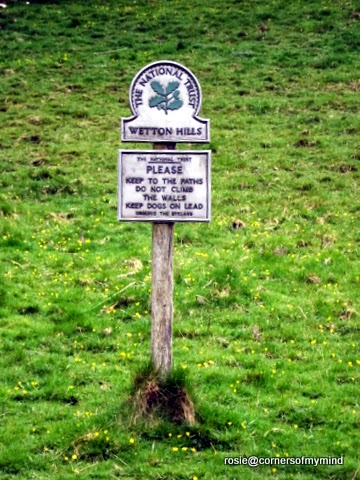 When we reached the bridge to the woodland walk up to Thor's Cave we doubled back and went into Wetton Hills. 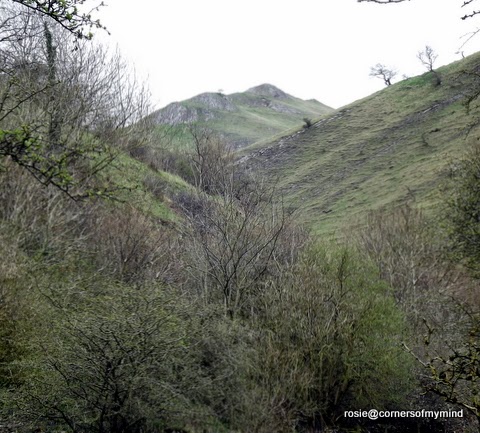 We walked quite a way up into the hills before doubling back yet again
to join the circular route back to the Mill. 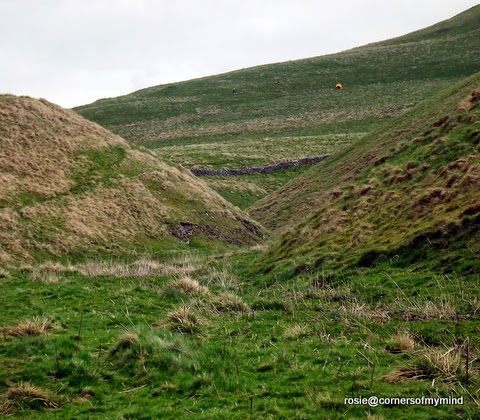 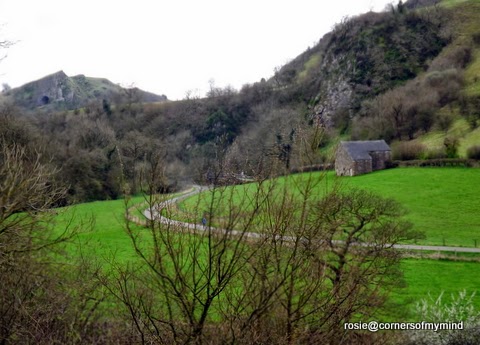 And the Mill itself, down in the valley.... 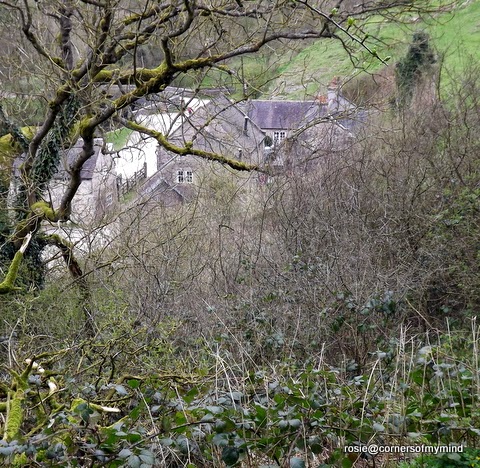 glimpsed through the woodsmoke and trees. 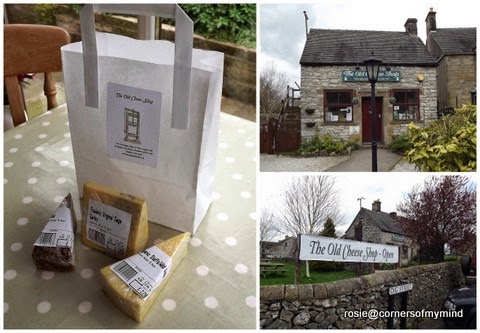 After our walk we drove into the village of Hartington where we visited the Cheese Shop and were tempted to try some unusual cheeses.  A Bowland, a Sage Derby and an Organic Staffordshire with Wild Garlic.
Posted by Rosie at 2:55 pm 26 comments:

The Appealing Whiteness of Spring

I always think of the bright yellow of daffodils as the essential colour of Spring but over the last few days I've noticed a lot of white flowers around........ 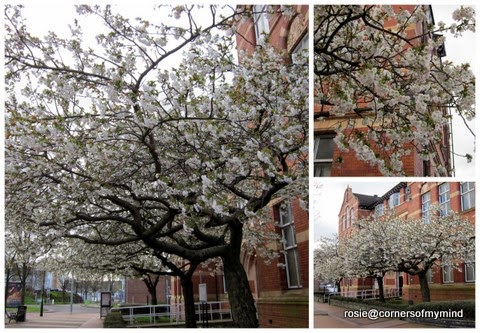 Trees blossoming outside the local library 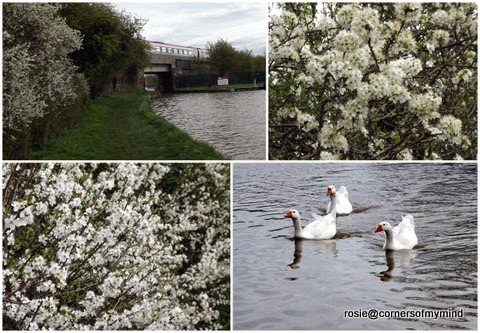 Blackthorn (and geese - just because I like geese!) on the Shropshire Union Canal 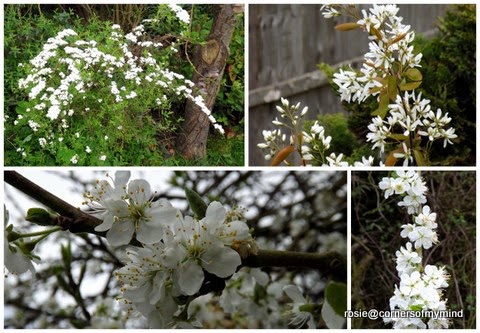 and in the garden at home, blossom on the plum tree, flowers on the bridal wreath (spirea arguta) and on the snowy mespilus (Amelanchier lamarckii).

Hope you all have a great weekend.
Posted by Rosie at 2:30 pm 22 comments:

The Year in Books - April

I'm a few days late with this post so I'm rushing straight in with a few comments about the books I have managed to read in March and which books I hope to read in April. 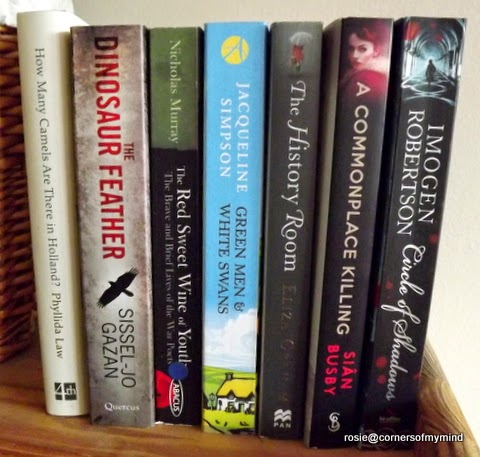 My first March read was the book I wrote about in my March's The Year of Books post.  The Outcast Dead by Elly Griffiths was as absorbing and unputdownable (is that a real word?) as I thought and hoped it would be.  I love this series of books about forensic archaeologist Ruth Galloway so much.  I had this book from the local library so it isn't amongst those in the photo above which divides into the two sections of have read and to be read.

My second read for March was A Common Place Killing by Sian Busby.  Set in the dusty and dirty bomb wrecked streets of London in the heat of July 1946 the underlying theme is of a general disillusionment and hopelessness of living in deprived conditions where long queues for food and rationing coupons were still the norm and the criminal undercurrents caused by black marketeering spivs and a struggling, understaffed police force made life bleak and sometimes dangerous.  The author, who died in 2012, was the wife of the BBC Economics editor Robert Peston.  After her death he transcribed the last chapters of the book from her hand written notes.

My third March read was by another of my favourite authors Imogen Robertson. Circle of Shadows is the 4th in her series about the detecting skills of Harriet Westerman and Gabriel Crowther.  I find these novels, set in the 1780s both intriguing and atmospheric.  They are well written and well researched.  This book is set in the fictional Court of Maulberg where murder is the order of the day.  Masked balls, automata, secret societies, spies and alchemy all add to the intrigue within this very closed society.

There are links to the above three books in my sidebar.

For April I have just started reading one of the books in the photo above namely The History Room by Eliza Graham so far it's ok but the one I'm looking forward to reading for this month is How Many Camels are there in Holland? by Phyllida Law.  I adored her book Notes to my mother-in-law so I'm hoping this one will be just as funny, touching and heart warming as that.  After that I may just get to The Dinosaur Feather, a Danish crime novel by Sissel-Jo Gazan.  I have books reserved at the library so if they become available first I may change my plans.

Joining in with Laura at A Circle of Pines for The Year in Books
Posted by Rosie at 1:51 pm 28 comments: