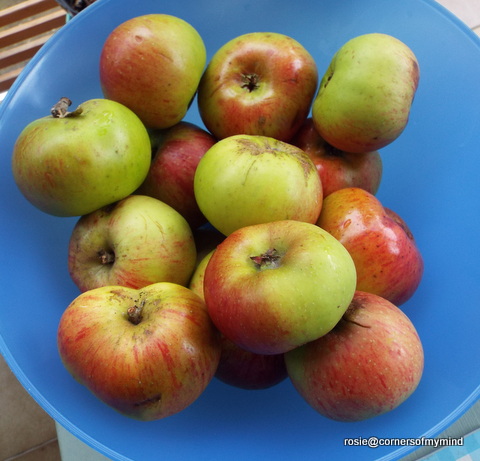 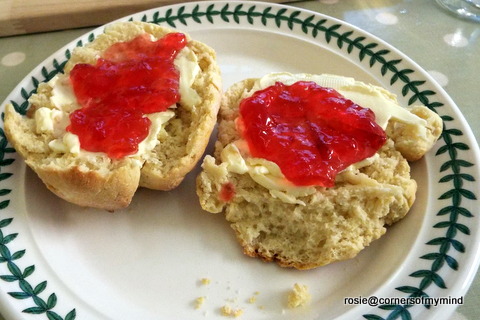 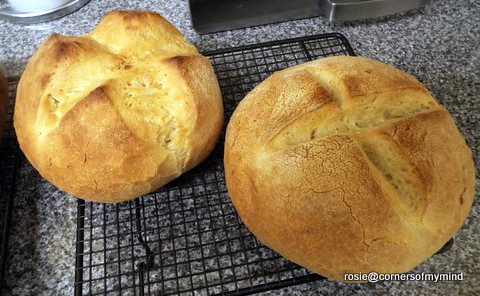 Whilst I was making scones Paul was mixing bread dough and leaving it to rise.  A couple of hours later we had two lovely crusty cobs.
We did seem to have quite a productive time in the kitchen over the weekend.
Posted by Rosie at 8:57 am 27 comments:

I'm late with my Five on Friday post but it is good to be back after a few weeks away and I'm happy to be joining in with the lovely Amy at Love Made my Home for this week's Five on Friday.  Do click on the link at the bottom of this post to find others who are joining in too.

Five things that have made me smile this week 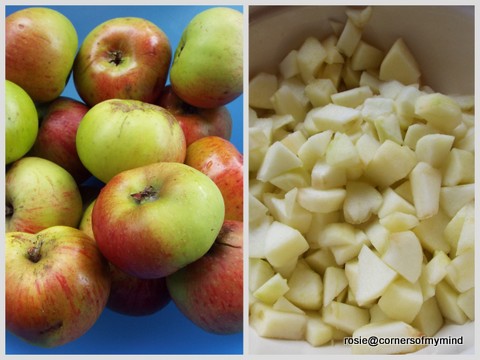 1.  Windfall apples from the garden of friends, after a visit we came home with a huge bag full and half have already been prepared for the freezer to make crumbles later in the year  We are now looking for jam and chutney recipes to use up the other half. 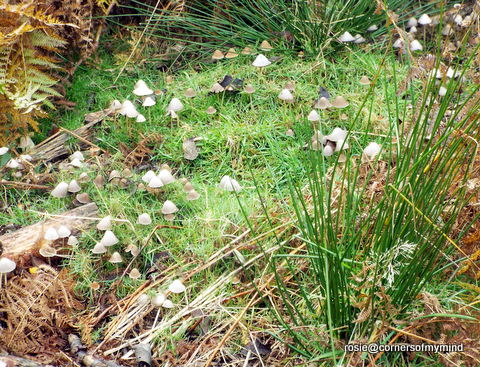 2.  Fungi So many little mushrooms or toadstools all in a ring growing over a wide expanse of undulating land close to the pathway.  They reminded me of little round houses on top of an iron age hill fort.  Or perhaps I just have an overactive imagination. 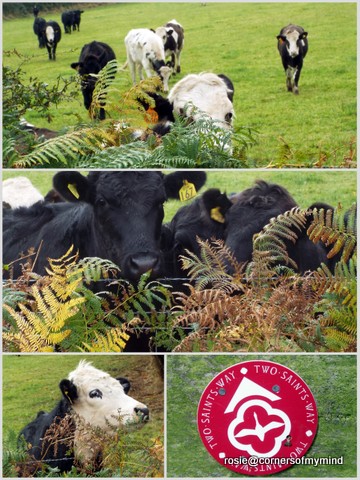 3.  Curious Cattle - these friendly cattle came rushing across their field to the fence to say hello as we walked by along a section of path nearby. 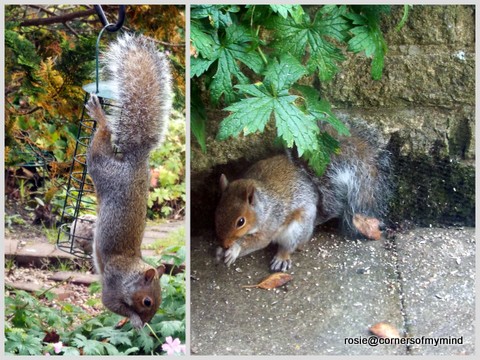 4. Squirrels - the squirrels in the garden have been very active, chasing each other around and using amazing acrobatics to pinch the bird food.  They are such fun to watch but they are still taking small stones from the path and burying them in the lawn.  We think it might be that they are trying to distract other squirrels from the real food that they also bury. 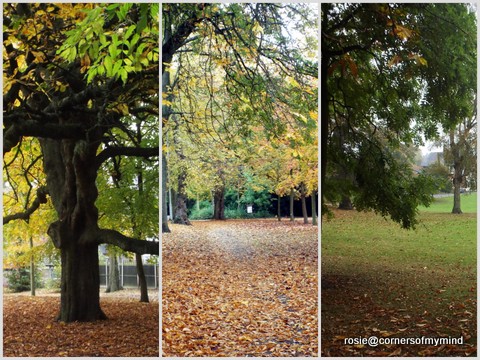 5.  Autumnal Trees - the trees on The Brampton in Newcastle-under-Lyme always look spectacular at this time of year.

Hope you enjoyed my five things, I'll be along to visit you all over the next couple of days. 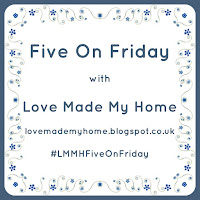 This morning we had a lovely sunlit walk around the lake at Trentham Gardens.  It was cool but not cold.

In the shopping area the flowery hanging baskets were still looking bright and fresh and almost late summer in appearance. 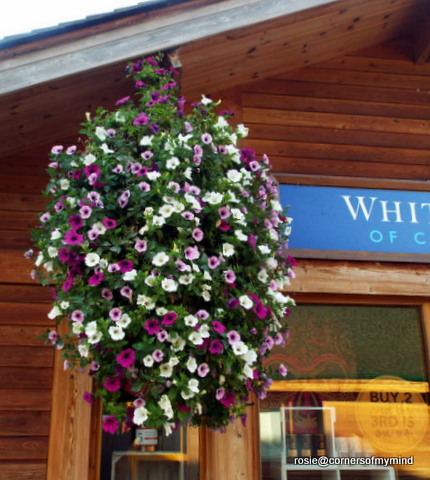 In the gardens and around the lake Autumn had definitely taken hold. 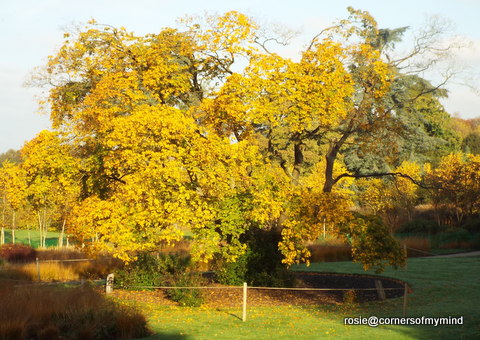 The leaves were changing colour and dropping to the ground in little breeze lifted whirlpools. 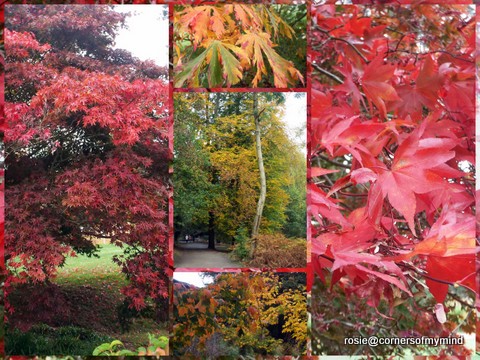 Such wonderful colours at this time of year. 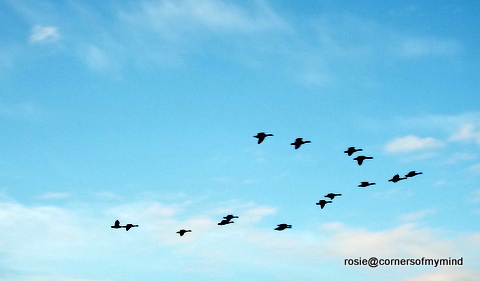 As we walked skein after skein of geese were arriving, flying low over the lake,  honking loudly to announce their presence then landing on the still water, almost as if they were arriving for a predetermined goosey conference or weekend away. 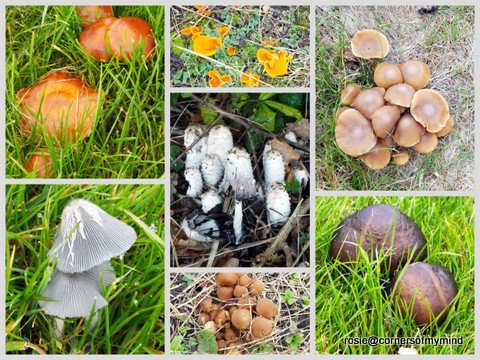 We found loads of fungi, in the damp grass and under the shelter of the trees. 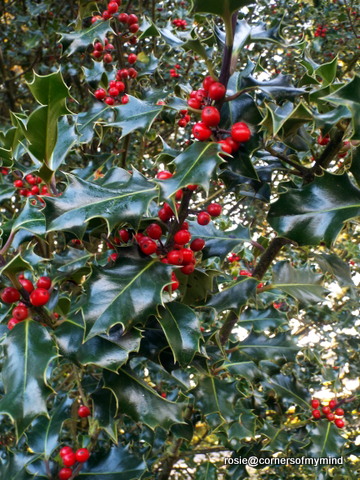 As we appreciated the wonderful colours of the season there were indications of the next season with the holly covered in bright red berries.... 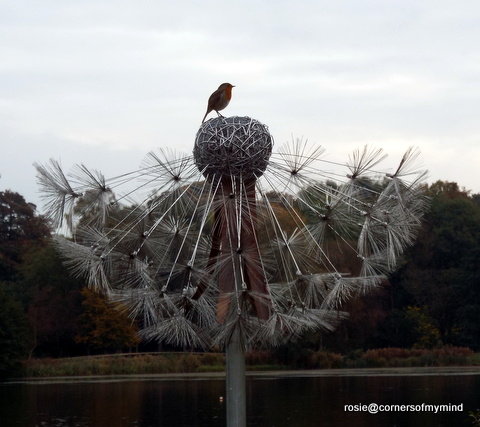 ....and robins singing their melodious song as if they were saying our time is coming very soon.
Posted by Rosie at 4:02 pm 34 comments:

And the Sun Shone

Almost a month after the untimely death of my brother-in-law from a massive heart attack at the fairly young age of 57, after visits backwards and forwards to his home and family, to coroner's and registry offices, to banks and building societies and the funeral directors we were able to finally say farewell to him yesterday.

We entered the crematorium to the strains of John Lennon's Imagine, we sang William Blake's words during Jerusalem and left to the strains of his favourites  The Beautiful South.  Much was expressed about his great sense of humour, his sense of fun,  his unselfish helpfulness towards friends and neighbours, his love of wildlife and animals, the Peak District and North Wales, his adopting of stray cats, his love of computers, his help with many organisations by dressing up and fund raising, his ability to hoard anything and everything if he thought it would be useful.  Along the way, even though injured by a fall whilst out with the Edale mountain rescue and spending many years fighting pain,  he helped raise hundreds of pounds for local charities.

Friends and neighbours came to say farewell.  His cousins, aunt and uncles came from York, Colchester, Bridlington and the Isle of Wight as well as from nearby Mansfield.  The sun shone, tears were shed, memories were shared and there were many smiles.  A good send off for a man described by quite a few of his pals on social media as 'a top bloke'.
Posted by Rosie at 7:13 pm 32 comments: 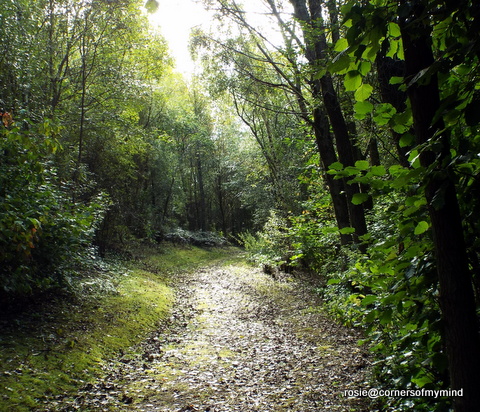 Another absence from blogging I'm afraid.  My brother-in-law has died suddenly and unexpectedly and his family are bereft and will need a lot of help and support over the coming days and weeks so I won't be around for a while.  My husband has lost his younger brother and only sibling.  Life seems a bit too hard to bear at the moment.
Posted by Rosie at 1:38 pm