Although I've been getting up and going to work in the dark for the last couple of weeks I'm usually home about an hour before dusk and this week I've been sky watching. 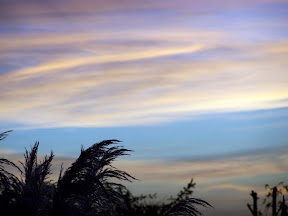 The colours are spectacular and ever changing. In fact, they change so quickly that by the time I've run upstairs, grabbed a camera and got out into the garden they are completely different but still very beautiful. 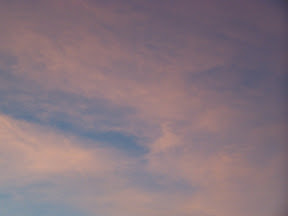 I love to watch them change from pale gold, to soft pink and then turn more vividly intense before the sun finally disappears and the early evening darkness makes an appearance. 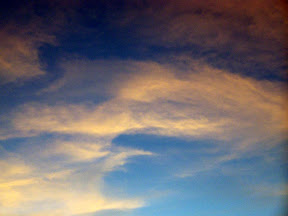 I think this is one of the most wonderful shows nature offers us and we can watch, for free, from our own back gardens. 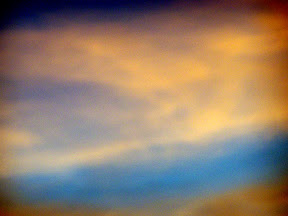 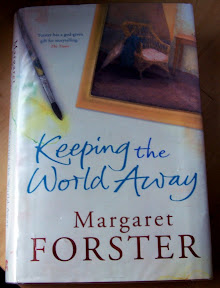 I haven't had a lot of time for reading, or indeed blogging, lately as I've been working fairly long hours at Royal Mail in the lead up to Christmas but one book that I've really enjoyed reading is 'Keeping the World Away' by Margaret Forster. I couldn't resist taking this book out of the library as its whole story, from begining to end, is based around one of my favourite paintings by my favourite artist. 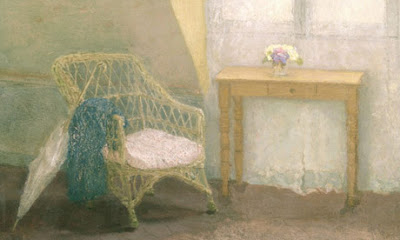 The painting is from a series painted by Gwen John, during the years of 1907-1909, of her attic room in the Rue du Cherche entitled ‘A Corner of the Artist’s Room in ’. The painting I have seen most often is the one owned by the in . This one shows the corner with a table in the window, a wicker chair against which leans a parasol. A coat or wrap drapes over the chair and on the table are primroses in a small pot. There are other versions of the painting showing the same corner of the room with the window open showing the buildings opposite, an open book on the table and the blue coat but no parasol.

The whole premise of the book is that one of this series of paintings, one with primroses on the table, is lost and explores its passage through time owned by one woman after another from the time Gwen John gave it as a present to her friend Ursula Tyrwhitt to the present day. The first part of the book covers Gwen's childhood in Haverfordwest and Tenby through to her studying, with her brother Augustus, at the Slade School in London, her departure for Paris, her love affair with the sculptor Auguste Rodin, and her subsequent and gradual withdrawal into an interior world. Each of the women who find themselves owning the painting are the kind of women who are different in some way from the expected norm of their age. Independent, unconventional, happy to be alone, striving against unsurmountable odds or unhappy with their lot in life. Each of them, like the artist herself, wanted to 'keep the world away'. The painting is lost in missing luggage on its way back from Paris, found by the person who recieves the valaise by mistake, it is then stolen, bought from a market stall, sold as a means of escape, given as a gift and then sold again. The painting travels from Paris to Hampstead to Cornwall, back to Hampstead, to the Scottish highlands and finally back to Paris where its fate is finally resolved. Although I found some of the women's characters less sympathetic than others and there was a strange moment when e-mails were referred to in a time I thought was supposed to be the 1970s - I may have been wrong on this - I was quite entranced by the book and thoroughly enjoyed reading it. 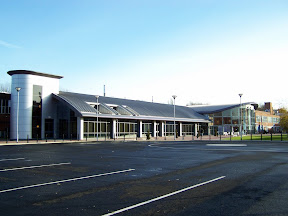 On Sunday we found ourselves passing through the village of Barlaston and decided to drop down into the Wedgwood factory site to have a look at the recently opened museum building. The new museum cost 10.5 million pounds to build, nearly six million of which came from the Heritage Lottery Fund. 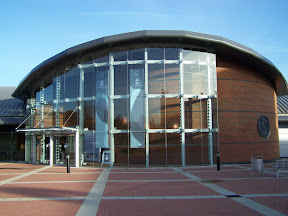 We didn't have time to go inside and decided to save this treat for another day but it was interesting to see the new building. It all looked very shiny and new and having visited the Museum before it was moved from its original place, I can't wait to go inside to see what it is like. 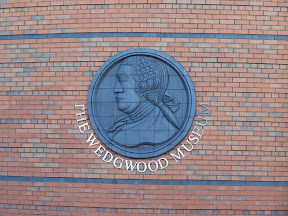 The Museum used to be within the Visitor Centre but when that was refurbished a few years ago it was decided that the Museum needed its own building as there were many more things in the collection than there was room to display them. 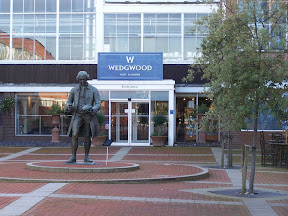 The Wedgwood Factory moved on to its present 'garden site' in the 1930s. Its previous site being at Etruria, near Hanley, where Josiah Wedgwood I had a purpose built village for his factory and its workers. The Wedgwood Family lived just up from the factory complex in a house which is now The Moat House Hotel. This area was where the Garden Festival of 1986 was held and is now a huge retail park with leisure facilities like a multiplex cinema, dry ski slope and Waterworld. I found a rather wonderful 'virtual' tour of the Etruria site on the museum's new website here. 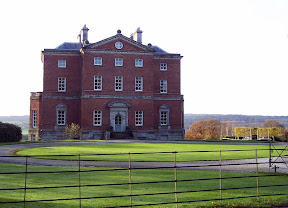 If you approach the Wedgwood site from the centre of Barlaston by the village green you pass Barlaston Hall, and it is always a splendid sight. It was rescued by 'Save Britain's Heritage' in the 1980s and restored in the 1990s. Built around 1756 by Sir Robert Taylor for Thomas Mills it was later occupied by Francis Wedgwood, master potter, partner in the Etruria site, grandson to Josiah I and brother of Emma, wife of Charles Darwin. 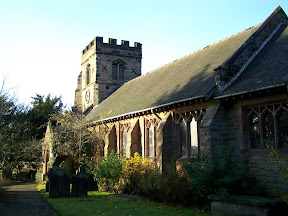 The old church of St John the Baptist stands close to the Hall and was completely re-built in the 1760s. It is a lovely little church almost hidden from view as you pass through the avenue of trees leading to the parkland surrounding the Wedgwood factory complex.
Posted by Rosie at 2:57 pm 5 comments:

As Valerie and one or two others asked about the Leek Sausages that I mentioned in my bonfire night post and as I had also promised to share the recipe, we made some for our meal yesterday so I could photograph them. Here are the ingredients:- 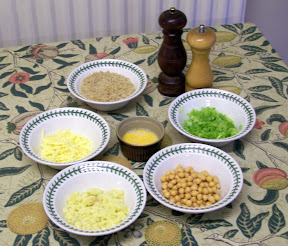 Use breadcrumbs, grated cheese, grated leeks, mashed potato, chickpeas, an egg to bind the mixture and of course, seasonings like salt and pepper and mixed herbs if you want. I haven't put any quantities down as you can use whatever you like and just improvise depending on how many sausages you want. It's best to make them fresh on the day you eat them. You can blitz the bread and the chick peas in a food processor. 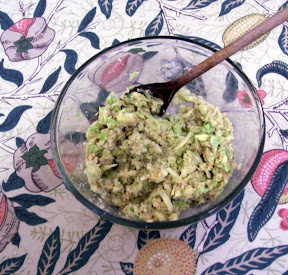 Mix the ingredients in a bowl until it is dough-like and malleable. Use your hands to roll into sausage shapes and then cover the sausages in more breadcrumbs. This is gloriously messy and sticky but great fun. 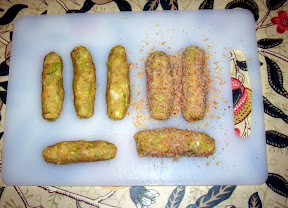 Leave the sausages to stand for a little while and then drizzle with oil before you bake them, in a medium oven, until they are lightly brown - about 30 minutes. 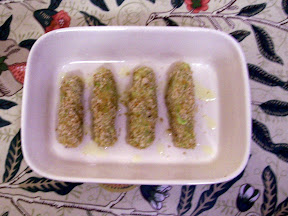 Or you can fry them gently in olive oil in a frying pan. 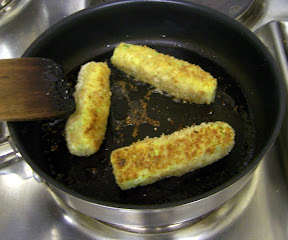 On bonfire night we served them with mashed carrot and potatoes and braised red cabbage. They are also nice with mashed potato and red onion marmalade. 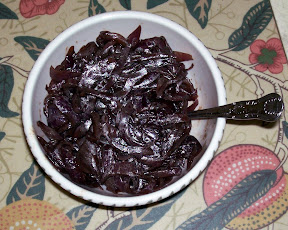 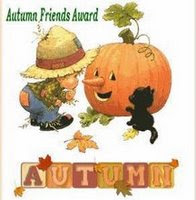 What a lovely surprise! Melody from Teatime with Melody has given me this lovely award - thank you so much.

I have, in turn to pass it on to three fellow bloggers, so I think I will pass it on to:- Teresa at Blueberries, Art and Life, Lynne at Bun Mountain Cottage and Barb at Stamplicity.

The weather this weekend has not exactly encouraged the country walking we had intended so we ended up, yesterday morning, on our usual walk around the lake at Trentham. We arrived about 10.30a.m. in a shower of rain and went straight for a warming cup of coffee at the Lakeside cafe before setting off for a rather damp walk. Gloomy and wet it may have been but the colours were spectacular, the last splendid defiance of the dying leaves before the bleak winter sets in. 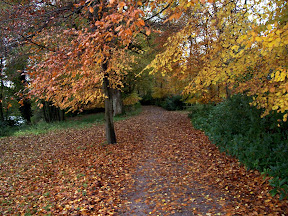 It was so quiet and peaceful as we walked, hardly a soul in sight; just a couple of hardy rowers on the lake. At 11a.m. they stopped rowing and remaind still their heads bowed, we stopped too, just for a short while to think about how lucky we are and how thankful we are to those who have given so much so that we could be here, now, this very minute, enjoying this beauty. 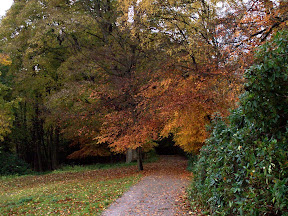 Then we walked on in contemplative silence each with our own thoughts, hoods pulled up against the rain, toes inside wellington boots getting colder and fingers inside warm gloves gradually begining to tingle with cold. It was time to go home. 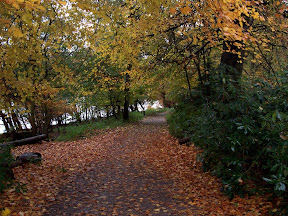 The heating is on and the house is warm. The cats are all in for the night, whether they like it or not. As I'm 'cat sitting' next door's cat she too is in and warm with the lights on and the curtains drawn against the coming storm. As if they knew they should enjoy the day and feed as much as they could the birds have been whirling around the garden and bird table all day, starlings, collard doves, wood pigeons, sparrows, great tits, blackbirds and magpies I worry for them tonight, where do they go? How do they cope?

There is an apple cake cooling on the kitchen table and the vegetables are prepared for our evening meal - mashed carrot and potato, red cabbage and leek and potato sausages topped with sliced mushrooms - to be eaten as soon as the worker comes home.

I saw the children on their way home from school rushing in excited anticipation. Outside the light is fading, the street lights are coming on and there is a stillness in the air, the lull before the storm.

So Remember Remember the 5th of November all you like, we are all safe at home, warm, cosy and well fed, curtains closed and fire turned up, protected from the noise and chaos outside. 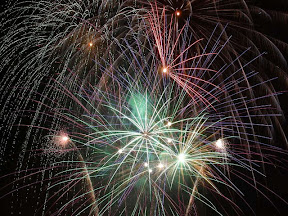