Just a bit on the damp side

What a morning it's been! 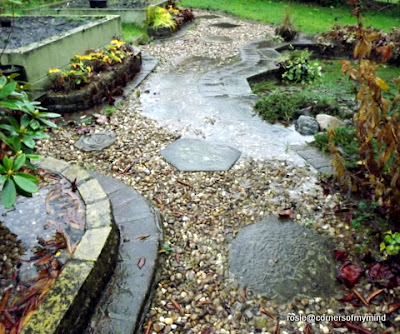 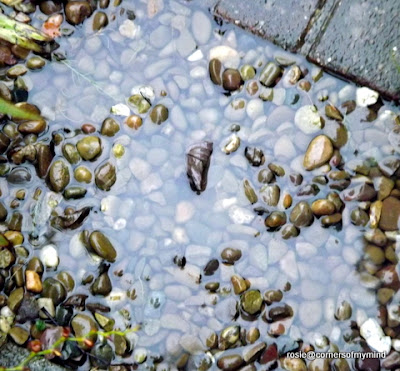 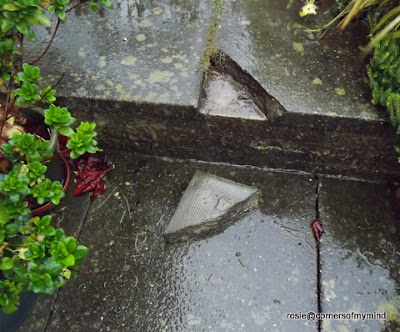 Garden steps broken, I trod on the corner as I went out to feed the birds earlier and hurtled forward but managed to stay upright.   It's not a flood of biblical proportions by any means but it has entered the house, well garage,  which is connected to the rest of the house. 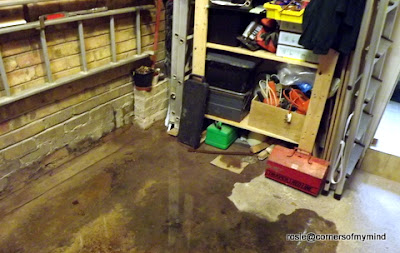 I did have a dental appointment this morning but they rang last evening to cancel so I don't have to go out except to post a birthday card which I can do just round the corner on the next street, when and if it ever stops raining.   In the meantime to cheer up the day I've made a cake, a chocolate cake.  It's not the most attractive cake in the world but it smells wonderful - just hope it tastes as good. 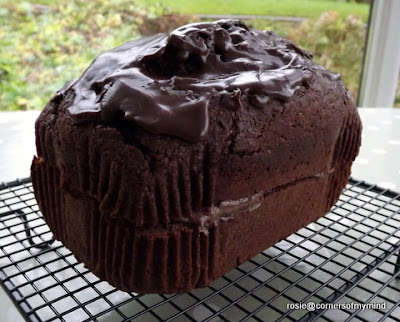 Below is the Lady Chapel the only part of the old church of St Chad which remains standing after it collapsed one night in 1788.  By the end of the 18th century the building was falling into disrepair and cracks had appeared in the tower,  the famous engineer Thomas Telford warned that the church would collapse and not long after it did. 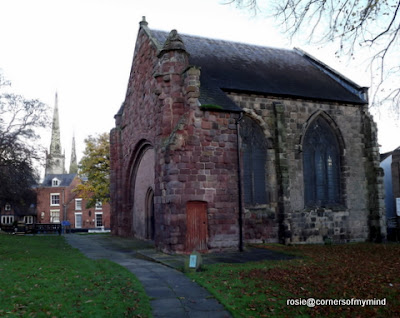 During the time of King Offa of the Mercians (757-96) there was a monastic college on this site whose church was dedicated to St Chad, the first Bishop of Mercia.  In 1148 it was replaced by a much larger church.  Below, open to the elements are the arches of the sedilia.  The remains stand on an incline at the top of Milk Street just off Wyle Cop in the centre of the town. 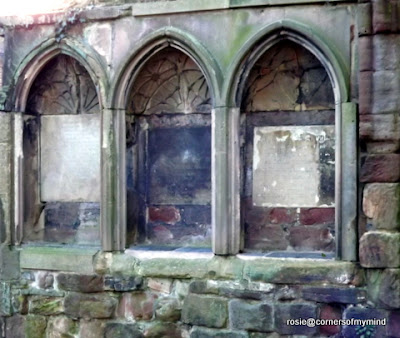 A site was chosen, on a hill in the loop of the River Severn as it runs through the town, for a new church dedicated to St Chad and the foundation stone was laid on St Chad's day, 2nd March 1790.  Stones from the old church were used in the foundations. 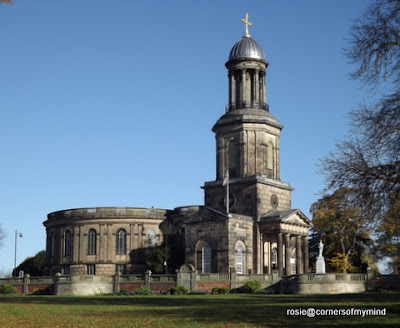 Charles Darwin famous naturalist and  author of 'On the Origin of the Species' was baptised at the church in 1809 and attended services there with his mother, Susanna, daughter of the famous potter Josiah Wedgwood. 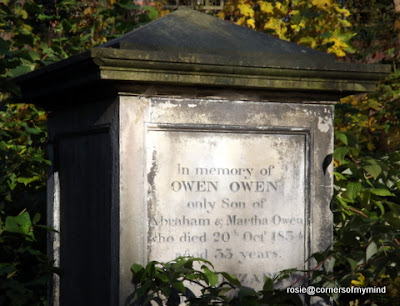 There were some fascinating grave stones in the church yard, I was amused by the name on the one above. 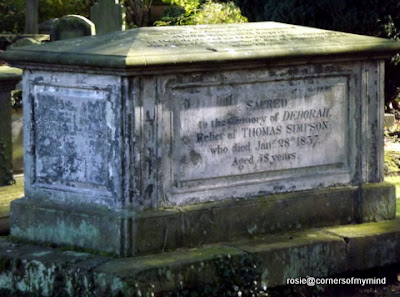 Some of them were very elaborate. 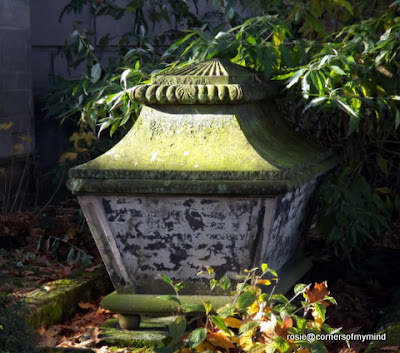 With their classical influences and designs. 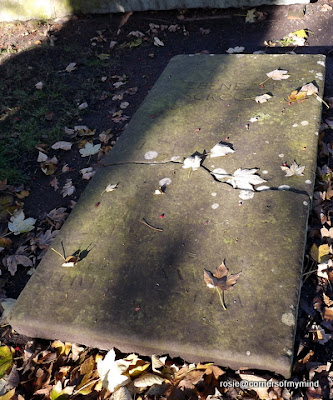 Some were very plain, now who is buried here?  Oh?  never! 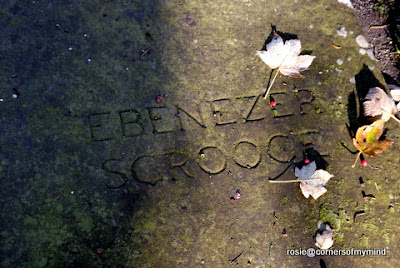 Ebenezer Scrooge? Bah, humbug!  Well, no not really!  The stone is a prop which was used during the filming of a TV adaptation of Charles Dickens's novel  'A Christmas Carol' in 1984.  Apparently George C Scott was Scrooge and David Warner was Bob Cratchit.   It is in fact a real stone of the correct period which had been so worn away that they were able to inscribe over it.  If you look closely you can see the vague outlines of some writing on the bottom of the stone.  I wonder whose stone it was?
Posted by Rosie at 7:12 pm 28 comments: 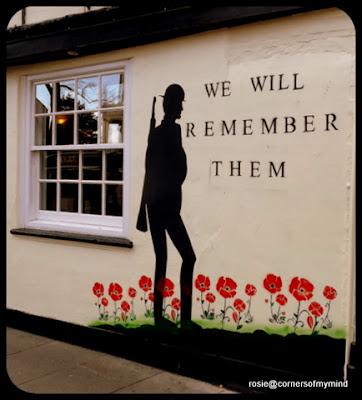 Spotted yesterday a bit of street art on the wall of The Cromwell Hotel, which stands right on the joining of St Mary's Street and Dogpole, Shrewsbury, Shropshire.

(more from Shrewsbury in my next post)
Posted by Rosie at 9:34 am 6 comments: 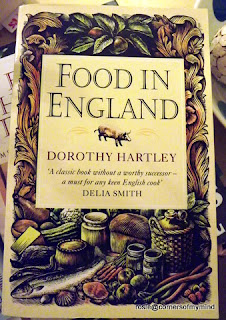 One of my favourite 'dip-into' books from our  bookshelves is Dorothy Hartley's 'Food in England'.  I bought this copy quite some time ago and am always fascinated by the snippets I pick up from it.  It is a social history of  English food through the ages; its uses, its preservation. preparation and presentation.

I know very little about Dorothy Hartley's life except that she was born in Skipton, Yorkshire, that for several years she lived in the vicarage at Rempstone in Nottinghamshire, where her father was the Rector, a village we pass through a couple of times a year on our way into Lincolnshire.   She spent most of her later life in the village of Froncysyllte near Llangollen in Wales, somewhere else we pass through quite often on our way to Porthmadog, where she died  in 1985 aged ninety two.

Consequently I'm very much looking forward to one of the programmes which is part of the 'Food, Glorious Food' season on BBC TV this week.  Historian Lucy Worsley is presenting a television programme about this renowned and well-respected author and illustrator called  'The Lost World of Dorothy Hartley' on Tuesday at 9p.m. on BBC4.  I just know I'm going to find it fascinating.

I'm also looking forward to putting these pretty Christmas trees on our tree! 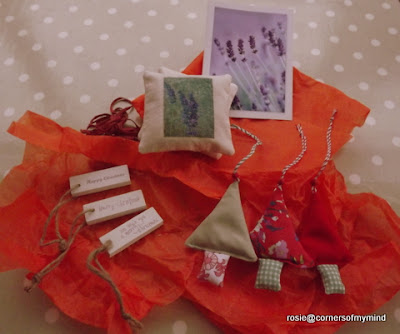 I was so lucky recently to come second in Suzy's giveaway at Rustic Vintage Country and when my lovely parcel  arrived as I opened it the smell of lavender was so wonderful.  Your handmade goodies are beautiful  Thank you Suzy.
Posted by Rosie at 2:42 pm 22 comments: 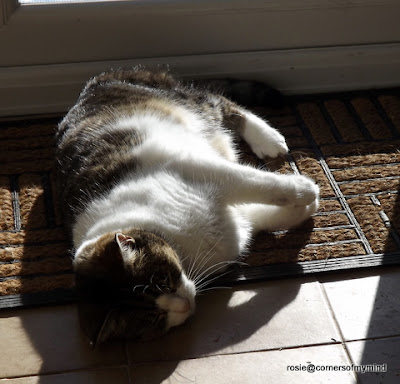 If they want to get out of the back door they will just have to step over me. 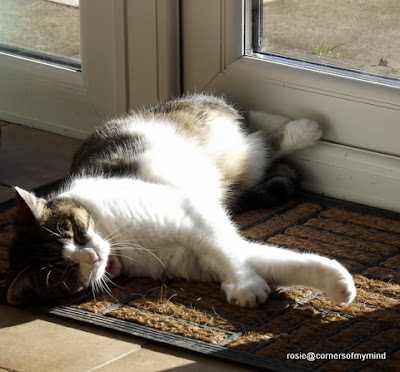 It's very relaxing just laying here, when you get to 17 you need to take it easy and chasing that squirrel this morning just tired me out.  You have to keep those little creatures in their place though, let them know who is boss of the garden. 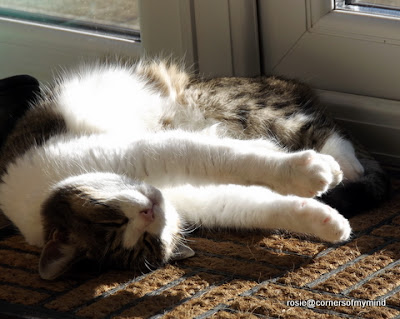 I think I'll risk being trodden on and stay here a while longer, then I'll have a roll around on this mat where they wipe their feet after they have been in the garden.  Then, for a bit of fun, I'll run upstairs and clean myself down on their bed!  They'll like having bits of garden and dust there I'm sure and be so pleased that I'm clean and tidy again.  Then after that well..... it may be time for another snooze.