This, That and Recent Reading

I've finally been able to get out and walk around the garden.  It is still very wet and there are very few signs of Spring at the moment.  Some of the shrubs seem to be suffereing from excess water, not surprising after all the rain which followed the melting snow. 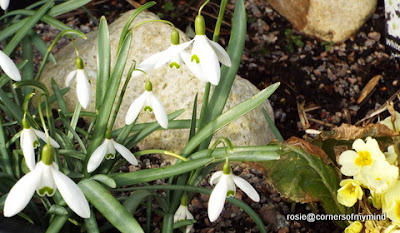 Earlier in the week on a misty morning whilst the pond was still iced over a heron came down onto the garden to take a look at the corner where the ice had been broken up with an old screw driver so that wildlife could get in or out or drink from it.  It didn't find anything of interest and soon flew off over the gardens.  What strange birds they are, quite prehistoric in looks, it certainly frightened two of the cats who were exploring the garden. 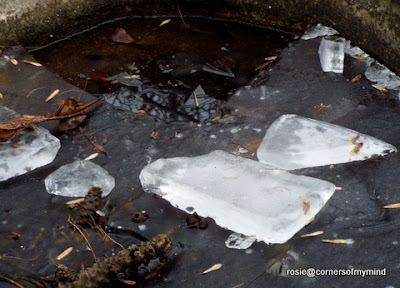 Every morning this week we've heard the sound of geese flying over the house and this morning on our way back from an early walk we both heard and saw them as they flew over the rooftops. Just three but you would have thought there were more from the sound they made.  On our walk we had spotted a woodpecker hammering away on one of the trees by the fishing pool, it stayed there for ages.  I didn't have a camera with me! 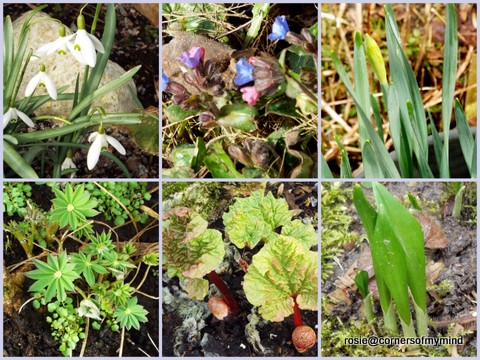 Above a few  hopeful signs of Spring in the garden. 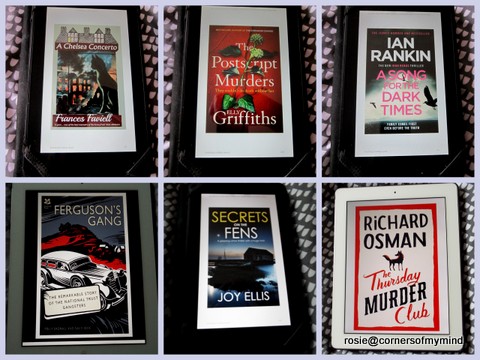 Over the last week or two I've read 'The Postscript Murders' by Elly Griffiths, 'A Song for the Dark Times' by Ian Rankin and 'Secrets on the Fens' by Joy Ellis all on my Kindle and all highly enjoyable.  I've got 'A Chelsea Concerto' by Frances Faviell to look forward to.

Borrowed from the Library on e-books via the IPad (the library doesn't loan to Kindles) I've been reading 'Ferguson's Gang' by Polly Bagnall and Sally Beck in between and around those above.  I've yet to read 'Thursday Murder Club' by Richard Osman but I do know the story as I've been listening to it serialised and read by Haydn Gwynne on BBC Sounds.  I think it is still there if you are interested in it.

Even though February is a short month this year it has seemed unusually long.  I don't want to wish time away but a few slightly warmer, sunnier days would help banish the inertia that seems to have overtaken both of us in the last couple of weeks.  Here's hoping for slightly brighter days, they surely can't be that far away.

It's amazing how one bunch of daffodils from the local Co-op can cheer up a kitchen window when it is cold and bleak outside. 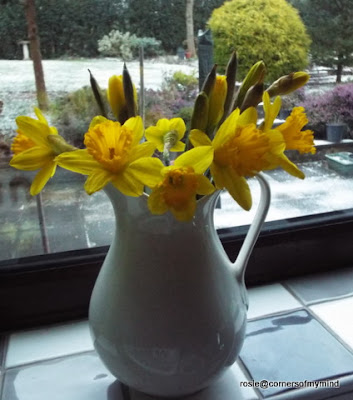 I've been 'under the weather' and 'in the wars' - aren't these old sayings great for summing things up - this week.  I felt ill for two days after my Covid vaccination on Monday.  It started with a tight chest, bad headache and pain across my back between the shoulder blades.  I still have a sore and red arm. Apparently it is good to have a reaction as apparently it shows your immune system is working well.   Mmm....  far better to have some side effects from the vaccine than have the virus itself though and I'm grateful to have received it. 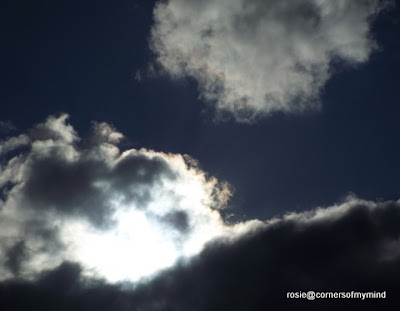 There have been some strange and wonderful skies recently, it's like looking at other worlds sometimes.
Yesterday we went for a walk as I was fed up with being indoors and I stupidly slipped on ice and fell flat on my back, I've hurt my elbows, shoulders and neck, luckily my head was well protected by both woolly hat and the hood of my winter coat.  I haven't had a headache or dizzy spells so I'm assuming I'm okay although I ache all over today so am staying warm indoors. 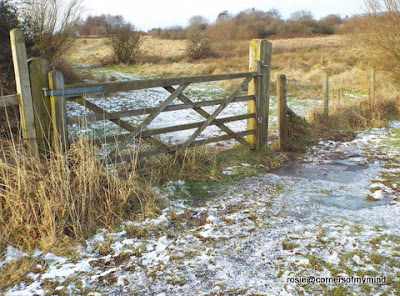 A photo from the walk.  You can see how icy it is.
Take care everyone and have a good weekend.

Five Things for the First Week in February

1. This week has been 'Tinnitus Week  2021' to raise awareness of this sometimes quite debilitating condition. 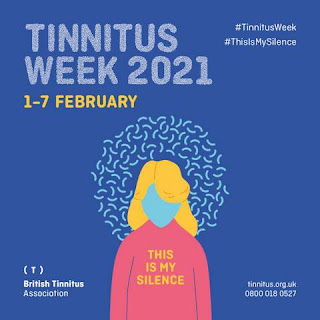 I can't remember when I last heard silence and I can't remember when I suddenly realised that my ears were making noises it just sort of crept up on me.  I'm guessing about six years ago now.  I thought at first it was high blood pressure but it didn't go away.  As I type this post I have what I can only describe as steaming/hissing kettles in my ears, when I go out and about it seems to reduce in scale but the worst aspect is the way loud noises make me anxious and sometimes tearful if they make me jump.  Generally I just 'get on with it' I can ignore it but sometimes it makes me feel fragile and unable to concentrate.  I have my first Covid 19 Vaccination on Monday, I expect the tinnitus will reach high peaks for a couple of days afterwards just as they do after my ordinary flu jabs.  I have to go to a Methodist Church for my jab it was either that or the Scout Hut.  How strange life is!

2. The new National Trust handbook arrived in the post early this week. 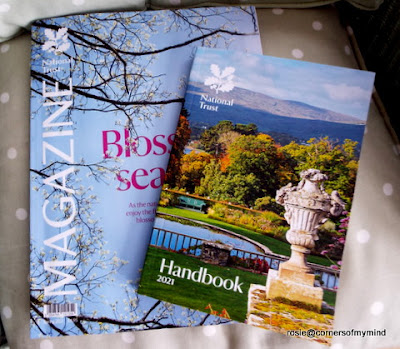 I wonder if, when things get back to some kind of normal, we will be able to use it?  I hope so.  I've missed visiting our local National Trust places like Biddulph Grange, Little Moreton Hall and Shugborough.  As well as walks at non National Trust places like Trentham Gardens and Westport Lake.  Paul said to me the other day that he just wanted to visit somewhere interesting and sit drinking a coffee looking at a view, I agreed but also said I wanted to be able to visit a museum or historic house, I do miss being able to do that. 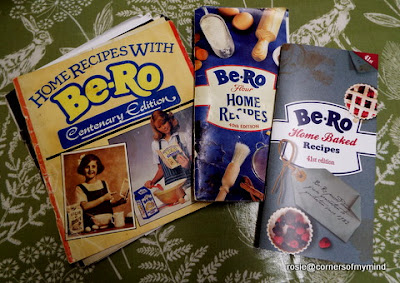 We've had both of the two older books for years.  The larger one is dropping to pieces.  The blue one I bought from a Be-Ro stand in a supermarket over twenty years ago to replace the larger one,  but both still get used.  Many of the pages of both have been stuck together over the years and when separated parts of recipes have disapeared. It's a good job I know the most popular ones by heart.  I sent for the new one from the Be-Ro website.  It has the old favourites and some new recipes in it too.  The coffee and walnut cake recipe I use each November  to make a cake for a friend's birthday is still inside.  Recipes for Lavender Highlanders and Heart Shaped Lemon Puffs are new.  I'm looking forward to using it. 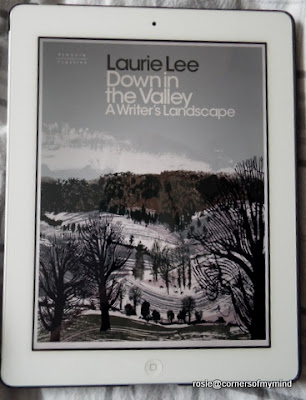 I've enjoyed reading  'Down in the Valley' by Laurie Lee.  I loved his descriptions of the countryside of his childhood in the Slad Valley in Gloucestershire.
" Just down here by the stream there used to be a gathering place for us kids from the village to come and play on Summer evenings.  This was where the sheep wash was, a stone bath, cut from stone and a stone bridge"
This reminded me of the Derbyshire village I grew up in and the sheep wash down the lane, past the vicarage, over a field and  just into the edge of the daffodil woods.  In the summer, during the long school holidays, we would sit on the stones chatting and laughing and dangling our bare feet in the water which ran in from the brook.
Last week there was a piece on 'Winter Watch' about bird song being local to specific areas as the generations of birds mimicked each other.  We noticed when we first came here there was a particular set of notes that the same blackbirds sang year after year.  Laurie Lee wrote about this in the book.   He returned to the Slad Valley after twenty years away and when he woke on the first morning home he thought he heard a Gloucestershire blackbird, then realised he was in Gloucestershire.
"and then, when I was fully awake, I realised it was a Slad blackbird, it was a Gloucestershire blackbird. I had not heard it for twenty years but it was instantly recognisable because they mimic their fathers and mothers." 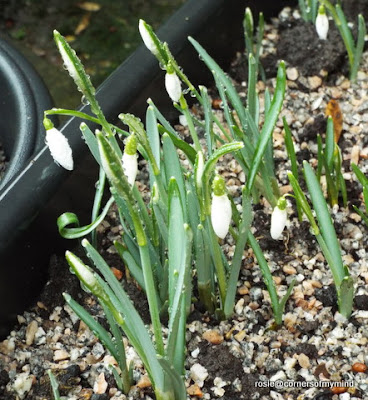 February is the month for Snowdrops.  Last year just before lock down I bought a couple of snowdrop plants and a bright yellow winter aconite from the covered market in Leek.  We planted them togther in a large pot as we've never been able to get them to grow in our heavy clay soil.  The snowdrops have grown again this year and seem to have spread but there is no sign of the aconite which is a shame.  Both flowers remind me of the fact that last February we should have met with my cousin and his wife at Hopton Hall in Derbyshire.  It was heavy snow and the meeting was cancelled.  A month later lock down happened and my cousin had been diagnosed with cancer and undergoing surgery and chemotherapy as well as coping with the pandemic.  Unfortunately he has to undergo more treatment and things don't sound so good.  Snowdrops are I think for most of us a sign of hope so I've added some more photos from a previous visit below. 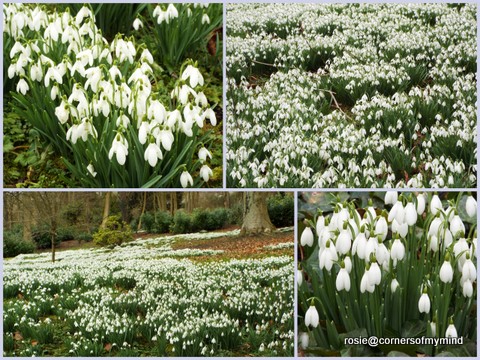 After a dismal try at counting birds on Friday lunchtime when they decided they didn't want to appear to be counted, I can't blame them the weather was vile, we sat down with coffee and biscuits on Saturday morning not expecting to see many birds again.  How wrong we were.

Here is the list of birds we saw during the hour.

Not a bad count at all.  I was concerned to see just one blue tit as they usually come as a pair and feed off the fat balls.  I was hoping that the Bullfinch would appear and about ten minutes after I'd mentioned him there he was!  We probably saw two dunnocks but as I wasn't sure about the first one we only recorded one.  There were a lot more sparrows in the hedges but we couldn't count them all, the eight I saw together on top of the hedge as they moved upwards to avoid a cat walking below. Of course after the count we were visited by a song thrush, three long tailed tits and also two Crows, not quite enough for a murder - the collective name for crows. 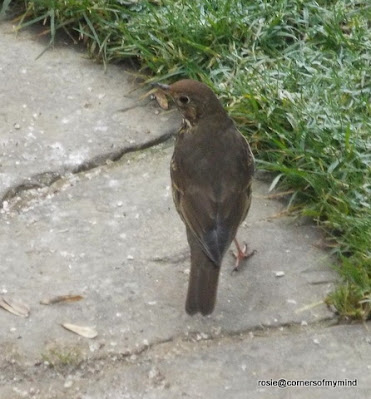 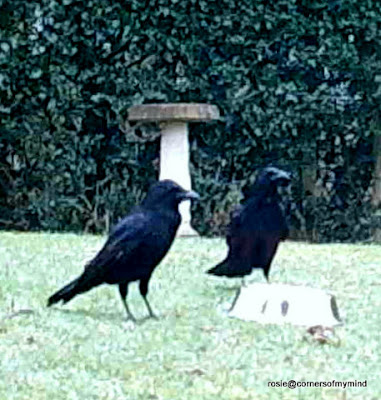 Below - not a bird, of course, but Mabel from across the road. 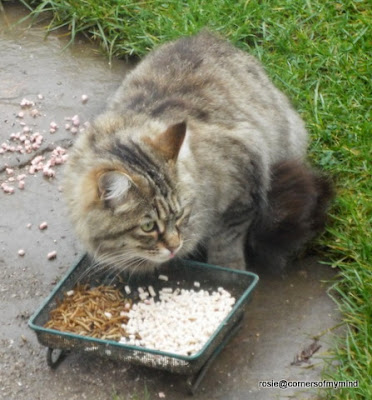 Cats, foxes and badgers like the suet sprinkles too.

All photos were taken through glass, so not entirely crystal clear. The photo of the crows  is from the wildlife camera taken early in the morning before we collected it from the garden after breakfast .

I tried a couple of times yesterday afternoon to submit my list and finally managed to access the site about 7.30p.m. in the evening.  I expect lots more peole were joining in this year as the event has been well advertised.  Goldfinches were my top bird, followed by house sparrows.