I was thinking the other day about paintings (or rather prints or copies of them) that I remember from my childhood and early years. 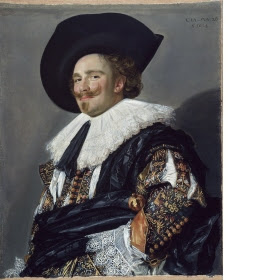 One of my earliest memories is of a copy of The Laughing Cavalier by Franz Hals which used to hang over a fireplace in one of the classrooms at the village school I attended.  There were three classrooms in the school.  Baby class was where we had our nature table and did dance and mime from children's radio programmes, there was also a sandpit and Wendy house in this room. Middle class was the largest and was in the main hall of the school, warmed by a huge boiler, it had the alphabet and times tables around the walls under the large windows, the dining tables were in here too and the stage was always fixed at one end of the hall for plays and concerts and also where we learned to play music on tambourines, bells, cymbals and castanets.  The top class was in a room on the back of the school near the kitchens.  This was where we used nib pens and inkwells, learned what we called 'real writing' and studied for the 11 plus.  I was 10 and three quarters when I took the eleven plus, passed and went to Grammar School, I was like a fish out of water there as I was a lot younger than the other pupils, that is another story but my abiding memory is of The Laughing Cavalier looking down on us as we struggled with inky fingers to write in a cursive, joined up writing, whatever the teacher had written on the board. 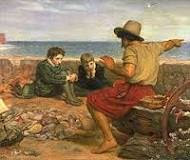 When I was six years old we moved from the large Midlands city of Leicester where I was born, to a small village in North East Derbyshire.  I remember a painting which used to be on the wall at the top of the stairs in our new home.  After my father died my Mum had married again (an old teenage sweetheart) and we moved to his home.   The painting, well copy or print of a painting, was The Boyhood of Raleigh by Sir John Everett Millais.  Over the years it faded but I remember it always there when I went up to bed on cold winter nights, reluctant to leave the roaring coal fire downstairs, clutching a hot water bottle.  The arm in the painting almost pointing the way to my little bedroom where it took ages to get warm and where sometimes, in the depths of winter,  I woke to frost on the inside of the windows.

The original of this painting can be seen in the Tate Gallery. 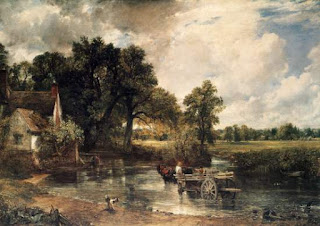 A few years later my mother wanted new carpet and a new sofa for what we called the front room.  This was a room we rarely used until we put a television in there.  There was a piano in this room and I was sent with my friend Wendy for piano lessons given by a music teacher who lived down in the centre of the village opposite the parish church.  When Mum got her new carpet and sofa the room had been decorated too and she bought a print of a painting she'd always liked for the back wall behind the sofa, it was The Haywain by John Constable.  This was another painting which became so familiar to me.  Many years later I did an 'A' level evening class in Art History at the Art College in the nearby town where I worked.  One of the questions in the exam just happened to be about Constable's paintings of The Haywain and Flatford Mill.


Of course non of the above paintings would be chosen as my favourite paintings but I do have an affection for them as they hold so many memories.   Joining in with Barbara at Coastal Ripples for Paint Monthly