The Last Section of the Monsal Trail

On Saturday we finally got around to walking the last part of the Monsal Trail. As you know we've been walking it in sections this year and had saved the final bit - Hassop to Bakewell until last. We parked at Hassop Station and went into the bookshop for a mug of coffee before starting the walk. 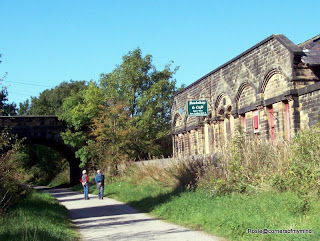 After coffee - what is it that is so perfect about sipping coffee in a book shop? - we set off along the sunlit, leafy path towards the market town of Bakewell. It didn't seem to take very long, under half an hour, to reach Bakewell Station the designated start of the walk but, seeing many people walking from just under the bridge nearby we decided that there must be a path down into the town which wasn't on a main road with lots of traffic so we decided to explore. 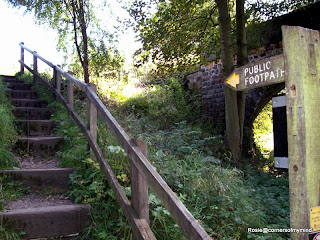 Just before the next bridge was a public footpath up some steps and across a bridge - being drawn that way by sound of barking dogs and loud speaker announcements which we decided must be coming from the showground near the cattle market in the town centre. We went over the bridge and a stile and into a field and there in front of us was Bakewell. 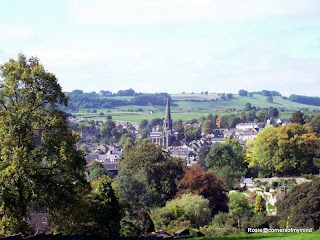 We continued along the footpath and down through the fields towards the show ground where a dog show was underway - calls for dogs to participate in agility trials were being announced. It all looked great fun and there were loads of dogs and their owners buzzing around the immediate area. 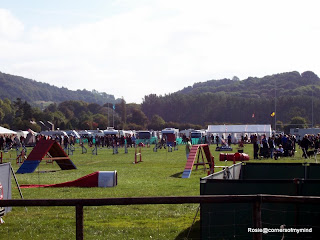 It was also the day of the Farmers' Market and there were lots of visitors enjoying the stalls and produce in the warm sunshine. 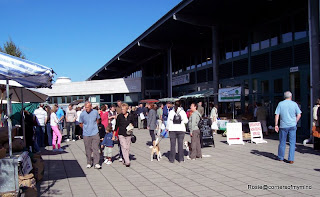 We decided to head into the town first and call at the farmers' market on the way back. I love crossing the river into the town and am always drawn to photograph the well known bridge..... 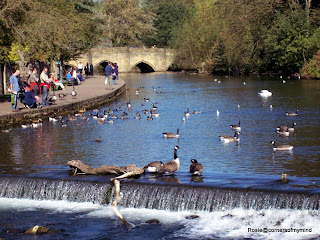 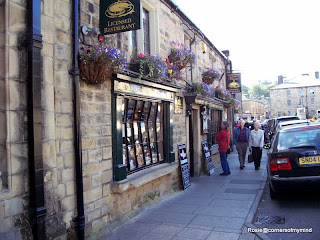 and this little row of shops that I love nosing into - not the betting shop I hasten to add. I was disappointed to see that the rather lovely, old fashioned ironmongers shop that use to be on the far end of this row had gone and had been replaced by another camping and walking shop. 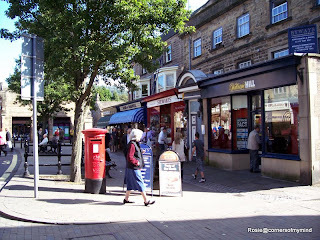 After a good look around the town we returned to the Farmers' Market and found this stall. We would have loved to buy some bread-making flour from them but of course we couldn't carry it back with us all the way to Hassop Station. 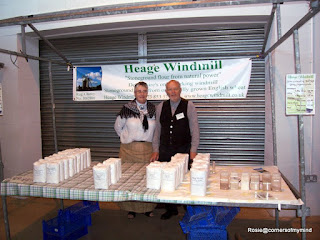 We got chatting to the people manning the stall and it turned out that the lady not only knew the village I lived in as a child and came from a neighbouring village but also went to the same school as both my cousin and her husband. Isn't it a small world? After a chat we said we would try to visit Heage Windmill before it closes at the end of October and headed back towards the path to Bakewell station. We couldn't resist an ice cream from the Hope Valley Ice Cream stand in the farmers' market- September's flavour is Damson and it was wonderful. 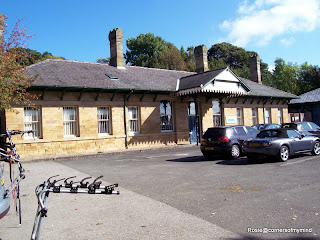 We stopped to take a look at the front of the station and then made our way back towards Hassop Station where our little car was parked. We followed the horses all the way back to the same car park and watched them being settled into their horse boxes for their journey home - then we too, set out towards home. 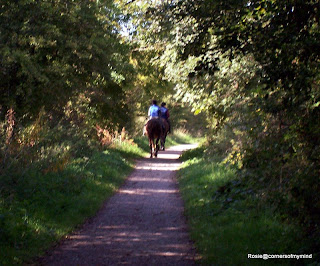