Oh dear, I've missed a couple of weeks of these 'happy' posts but aim to catch up if I can.   Here are four happy things from this week and last. 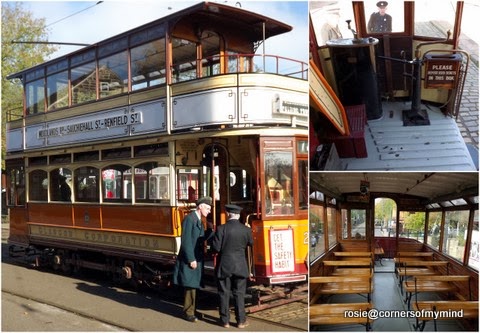 1.  A tram ride - on a Glasgow tram which used to run up and down Sauchiehall Street - it cost us an old penny each to travel as many times as we wanted during our visit to Crich Tramway Museum. 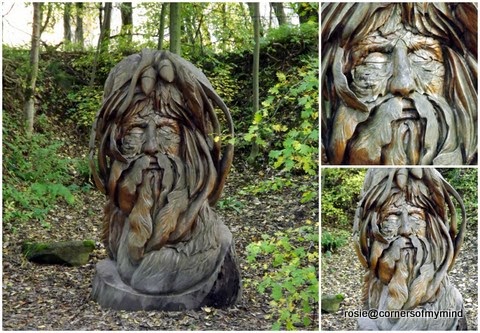 2. Green Man - a sculpture we found in the woodland walk at Crich.  I thought it was wonderful. 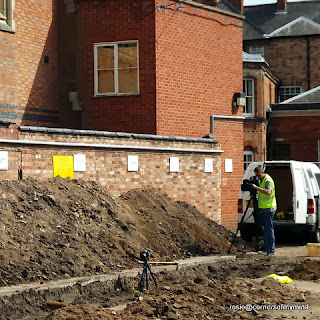 3. The King in the Car Park - The Discovery of Richard III  - we attended a wonderful, interesting and lively talk at the Potteries Museum given by Richard Buckley, Director of the University of Leicester Archaeological Services and Project Manager of the Greyfriars Dig during which the body of Richard III was discovered.  I've used one of my own photos of the dig taken when we visited on my birthday in 2012.  The dig started on August 25th and we went three days later to take a look, little knowing that even then they had uncovered the bones that would later be proved to be those of Richard III.  The lecture started with a background history of the city from Roman times onwards which added much to our understanding of the context of the situation of Greyfriars and the present findings and how they worked out where to dig and also worked out the layout of the priory.  Mr Buckley told an amusing tale of how on the day they began to uncover the bones he was busy with some visitng experts on medieval building when one of the team came and said 'I think you will want to see this' - he said something on the lines of 'Go away, I'm in a meeting - come back later' and the team member whispered 'curvature of the spine' 'wound hole in the skulll' - he said his following words weren't repeatable but from then on the dig became not just local, not even national but international as the world's press descended.  He also said, at the beginning of the project, that if they did find the remains of Richard III he'd eat his hat. One of the last photos of the talk showed him eating a piece of cake that someone had made in the shape of the type of yellow, hard safety hat worn during the excavation. 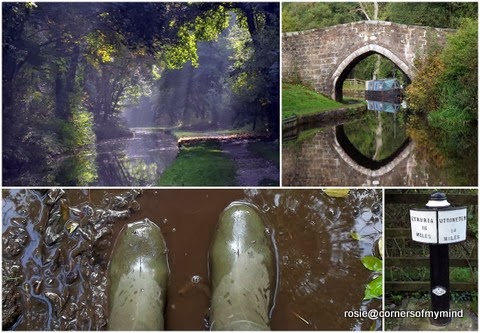 4. Wet, Wellie Walks - sunny, misty, breezy, damp at different times but never cold, I haven't felt that autumn chill yet as the weather still seems mild but we'll see what the next week will bring.

Linking up with  Little Birdie  where  '52 weeks of Happy' started. Each week you find just four things that have made you happy to share.
Posted by Rosie at 1:33 pm