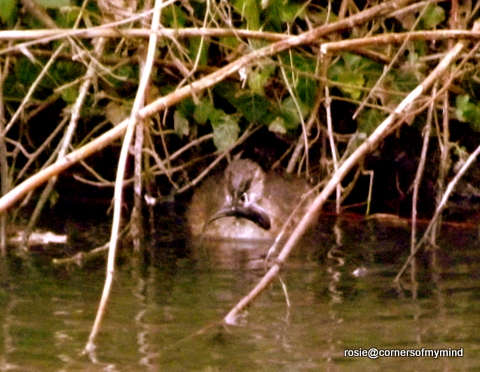 This happened to me the other day!  We'd been walking along the canal towpath trying to photograph the Dabchicks or Little Grebes.  They are quite small birds and you can find them easily enough by listening out for their constant chatter but my goodness are they swift!  They dip and dive and hide under the vegetation, turn their backs on you and move so quickly under the water that you have no idea where they will pop up next.  It is hard to focus on them and take a photo before they disappear again.  This one lingered for just a short while under some vegetation on the bank opposite to the towpath but I managed to capture an image of it.  I glanced at it and just thought it had a leaf in front of its face but when I finally downloaded my photos I could see that it was in fact a small fish in its beak, perhaps a minnow?  That was unexpected!

Here is a link to the RSPB's page on Little Grebes and you can listen to their chattering on there, it is quite distinctive.
Posted by Rosie at 8:32 pm