Back to the walk from Derbyshire Bridge to Errwood Reservoir. As we made our way towards the reservoir we saw an interesting sign so decided to make a bit of a detour 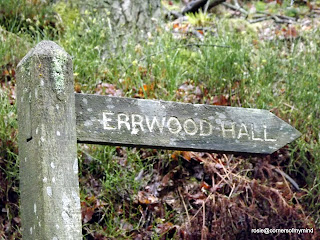 Walking higher up on the path to Errwood Hall we caught a glimpse of the reservoir through the trees. 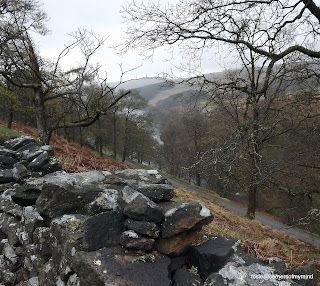 We followed the signs which led us past lovely, lichen covered stone walls, fast flowing streams and loads of rhododendron and azalea bushes, which will no doubt look wonderful in a few weeks time, until we found the remains of the hall. 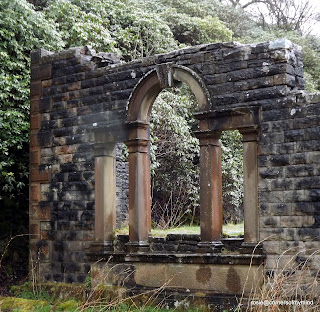 According to records  it was built about 1840 by a wealthy family from Manchester called Grimshaw who lived there until the 1930s.  The family were devout catholics and also had their own chapel and resident priest.  The family employed about twenty staff at the hall most of whom lived in cottages in a nearby village, the family also had their own coal mine and ran a local school which was attended by about thirty local children.  The last descendant of the Grimshaws died in 1930  leaving the hall empty. 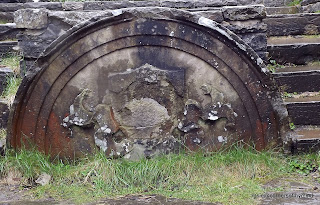 For a short time the hall became a youth hostel. The building was demolished in 1938 and some of the stones used for the building of the dam and water treatment works on the newly constructed Fernilee reservoir. 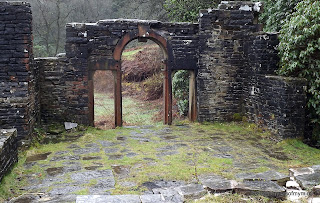 The remains have been preserved and are a popular stopping point for walkers in the area. We had the place very much to ourselves except for some lively, melodious blackbirds. 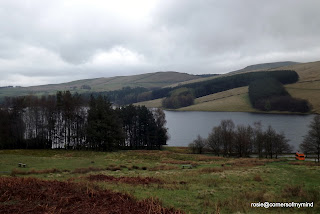 We set off back down the track to the side of the reservoir.  Errwood Reservoir was built almost thirty years after the one at Fernilee.  It was completed in 1967 by the Stockport Water Corporation at a cost of 1.5 millions pounds and it provides water for the town of Stockport and surrounding areas. 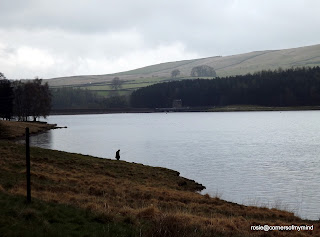 We intend to return to this area and do the walk around the Fernilee Reservoir perhaps later in the year.
Posted by Rosie at 2:29 pm