A Stream in the Sky

When we drive into Wales towards Porthmadog we nearly always go through Llangollen and onto Corwen and Bala - past -'The Butterfly Man' - and  - 'Glassblobbery' - I always look out for both of them as familiar landmarks.  Sometimes we stop at Llangollen, sometimes Corwen or the lake at Bala.  This time we stopped at the canal basin in the village of Trevor just outside Llangollen to stretch our legs, have a picnic and walk across the 'Stream in the Sky'. 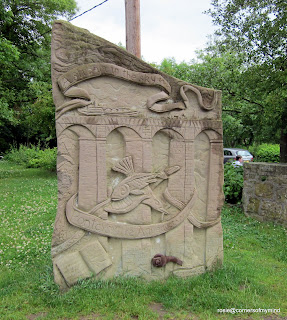 You wouldn't know from these photos, as I had to snap them very quickly because of the rain, that the place was very, very busy.  I hadn't expected it to be so popular especially on a wet Tuesday lunch time during term time but there were bus loads of  tourists and many cars with foreign number plates all visiting this wonderful World Heritage Site. 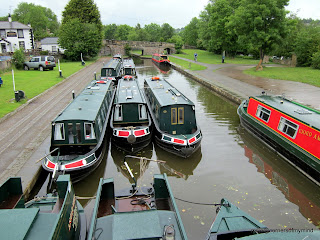 The canal walk was popular but it was obvious that most people, including us, had come to see the 'Stream in the Sky' - otherwise known as the Pontcysyllte Aqueduct. 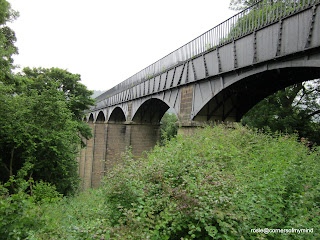 At 126ft in height and over 1000 feet in length it is one of the longest and highest cast iron aqueducts in the world and has a Grade 1 listed building status. 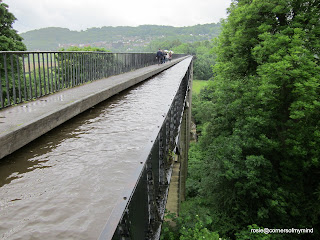 As you can see I did walk halfway across but I had to turn and go back as I was a bit anxious about slipping in the heavy rain and there was a group of tourists coming towards us all with umbrellas and I couldn't see where we were going to pass.   The height was also getting to me! 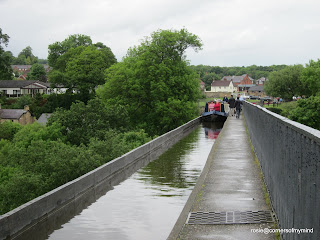 The Pontcysyllte Aqueduct, built by Thomas Telford and William Jessop, opened in 1805 having taken about ten years in the making at a cost of £47,000.  It is 11ft wide and just over 5ft deep - you can see why I didn't want to slip - just looking at it again knots my stomach! 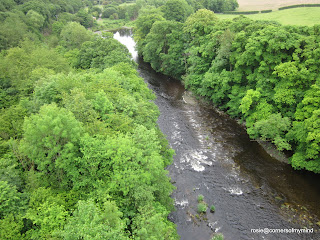 The Aqueduct, which carries the Llangollen Canal on its route towards Whitchurch and beyond where it joins the Shropshire Union canal at Hurleston Junction, spans the River Dee in the valley below. 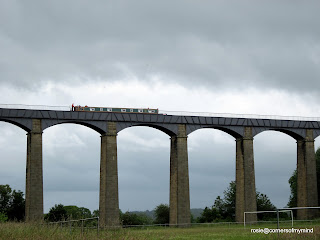 After our walk and picnic we drove around to the other view point where I was lucky to get a photo of a boat crossing the aqueduct and was able to take in how high it is - had I really been up there? 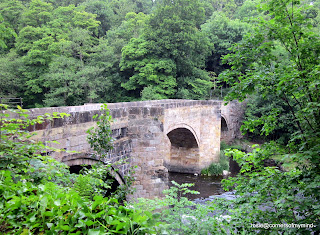 On the route between the two viewing sites we found this lovely pack horse bridge - more my size I think - from where I took the photo above.  In the opposite direction was the most lovely building on the side of the river.  I thought how French it looked jutting out over the water! 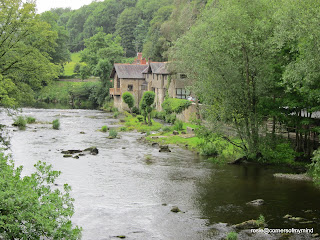 I've taken the title of this post from the sculpture in the first photograph  - just because I liked the idea of a stream in the sky!  I'm guessing that the person who made the sculpture found the quote from a specific source in archives somewhere  but I haven't been able to find any reference to it as yet.
Posted by Rosie at 9:38 am