A Visit to Shugborough - part 1

On Thursday I made my first trip away from home (apart from food shopping which I don't count) for a couple of weeks and as it was our wedding anniversary we decided to visit a local National Trust property and have lunch out too.  I've been wanting to visit the Earl of Lichfield's appartments at Shugborough since they opened for the first time to the public earlier this year and I also wanted to photograph the Essex Bridge from the estate side - you'll remember that I posted about it - here - a few weeks ago. 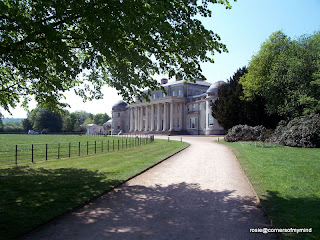 The first thing we discovered was that things had changed so much since we last visited!  Visitors used to drive quite close to the house to park,  now you have to park quite a distance away beyond the park farm and enter through a proper reception area.  This takes you straight into the walled garden where gardeners were working on the vegetable beds, scarecrows danced in the slight breeze and the blacksmith's shop was working. 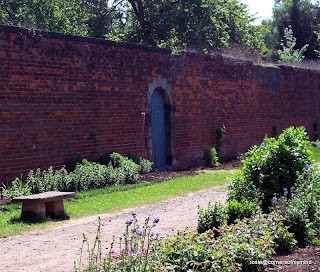 Below is the head gardener's house at the top of the walled garden.  It looks as if it used to have a green house or some such fixture on the front at one time.  It was built for his head gardener by Thomas Anson who, according to the information panel, hoped that 'he will move into this house before we enter the year 1806.  It is  much grander than most of my servant's lodgings, and thus shows his importance to the estate.' 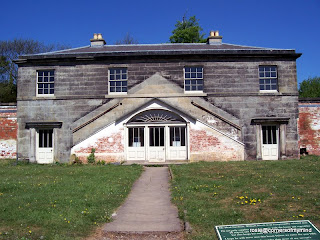 From here the signs take you through the workshops were old rural crafts like hurdle making, candle making,  leather working and wood turning are practiced.  There were several groups of people learning how to make hurdles and willow baskets as we passed by. 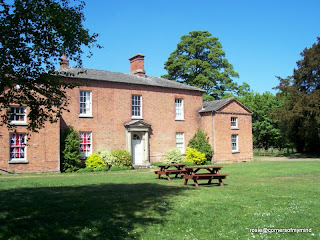 The next place on the trail is the Park Farm;  we hadn't bought tickets to go inside as we had been before and wanted this visit to see the Mansion House and grounds.  From outside the farm you can catch the train up to the old car park near the house and gardens  but we decided to walk up there across the parkland and catch the train back. 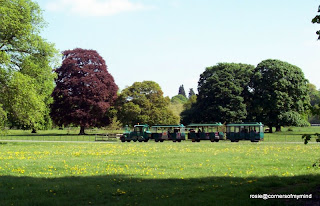 By this time we were ready for lunch so went into the Lady Walk tea room for a tasty meal of Broccoli, Mushroom and Red Pepper Bake in very pleasant surroundings.  We didn't have a pudding as we thought we would have an ice cream later after we'd visited the house and gardens. 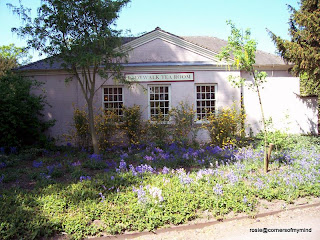 Our next stop was the interior of the house.  We thought that we wouldn't be able to take photos inside but we found that photography was allowed without flash.  As my camera isn't able to take decent interior photos without flash I let Paul take all the photographs inside and I'll borrow some from him for part two of this visit. 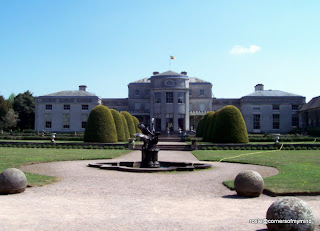 The gardens were lovely and we followed the sculpture trail by the river at the back of the house.  Across the river was the newly opened island arboretum but we didn't get that far on this visit and intend to return later this year when the rest of the sculptures are in place.  Below are some of the features to be found around the riverside gardens. 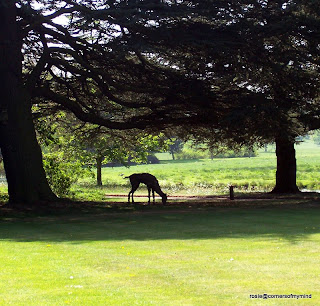 A deer sculpture under the trees - for a moment in the sunshine it looked real! 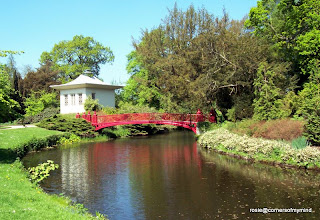 The Chinese house, completed in 1747, and red bridge which leads to the Cat's monument 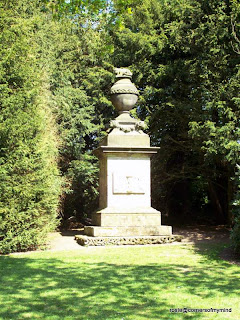 There are two theories about the monument, built c.1749.  One is that it commemorates the life of the cat which travelled around the world on board the 'Centurion' with Admiral George Anson.  The other is that it was a memorial to Kouli-Khan a Persian cat kept by the Admiral's older brother, Thomas Anson. 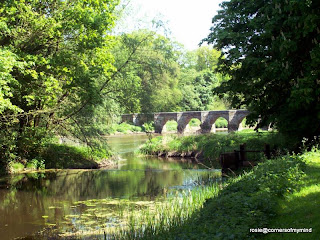 A little way along the river from the red bridge we caught our first sight of the Essex Bridge.  Before we left the gardens we walked along the Lady Walk amongst the blue bells and looked at some of the other sculptures - as this post is getting quite long I'll include those photos with the ones of the interior of the Mansion House in my next post. 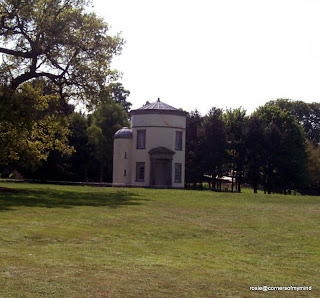 We passed the Tower of the Winds on the little train as we headed back to the Park Farm.  It was built c. 1765.  The downstairs was used as a dairy and at some point the upper floor was used as a gambling den. 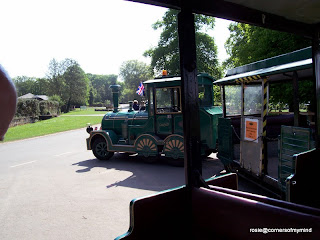 Just one word of caution here - we decided that we would have a cup of afternoon tea in the Granary tea rooms at the Park Farm but because we didn't have tickets to the farm we couldn't go in and we'd caught the train back there especially not realising, as there was nothing on the advertising banner or notice board outside to say that it was within the farm complex.  We decided that it was a step too far to catch the train back up to the Lady Walk tea room so we wandered back to the car park and stopped for refreshment on the way home.   I'll be back with more of the visit soon. 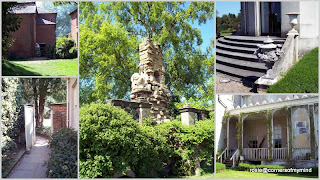