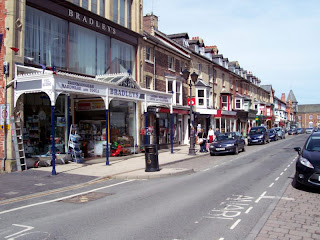 Llandrindod Wells is a lovely little town and everyone seemed so friendly.  In the coffee shop, in the tourist centre and in the museum.  The Radnorshire Museum was small but very interesting having many displays on the old county of Radnorshire, now Powys.  There was a huge collection of fossils and ancient artifacts plus the history of 'Llandod' and its time as Wales's premier spa town and of the12th century priory at Abbey-Cwm-Hir now the site of a Victorian house open to the public. 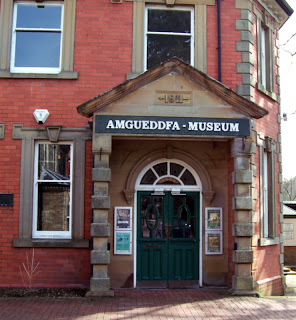 Upstairs the staff were putting together an exhibition about the Rev. Francis Kilvert and his friends.  The curator came to talk to us as he knew our friend as a former curator and friend of the Museum as well as a member of the Kilvert Society.  My other friend, with whom I'd travelled from Shrewsbury, was interested in the harmonium on display, as she plays piano and church organ, and the curator opened it up for her. 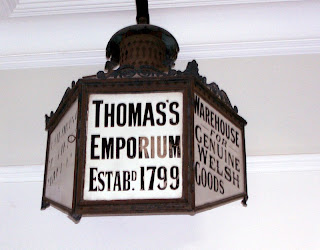 You will remember from my previous post that we were staying at the Thomas shop in Penybont.  Above is a sign in the Museum  taken from the first department store in Llandrindod which was opened by the same Thomas family- link to history here.  The Museum is close to the Metropole Hotel where we went for lunch.  We sat in the glass covered front of the hotel eating tasty sandwiches.  It was very warm and gazing out over the Temple gardens and at the hotels surrounding them it almost felt as if the sea and beach could be just around the corner. 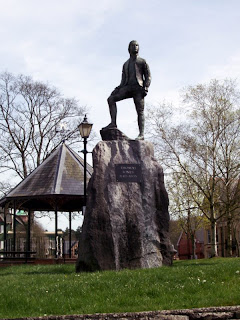 After lunch we crossed over to the temple gardens to have a look at a fairly new statue to one of the region's famous sons the artist Thomas Jones (1742 - 1803).  Here is a - link - to a Wiki page for further details of his life and times.  We were all enchanted by one of his landscape paintings  in the town's  museum. 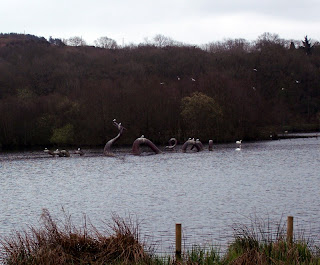 Just on the outskirts of the town is the Lake and in the lake you will find the Fabulous Water Beast.  This is a dragon sculpture and at over 40 metres long is one of the largest fountains in Britain.  He wasn't spouting water when I took this photo early last Thursday morning but he still looked magnificent. 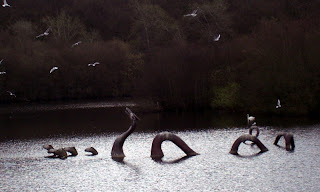 The dragon is made out of copper and was created by a local artist Richard Taylor. It was a community project by Arcady and over 2,000 people were involved in making the scales which cover it and all the scales are inscribed with messages. 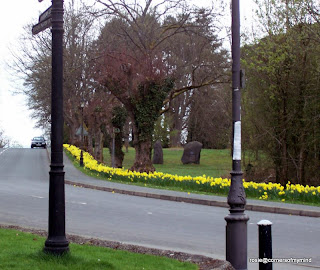 Across the road amongst the trees you can see some standing stones and the re-sited foundation stones of the ancient Capel Maelog.  Apparently every March on this road, volunteer members of the Radnorshire wildlife society organise a - 'toad patrol' -  to help the hundreds of toads and great crested newts cross the road to their mating grounds.  Apparently the local authority now have to close the road in the evening during the height of the toad crossings siting the safety of motorists as the reason! 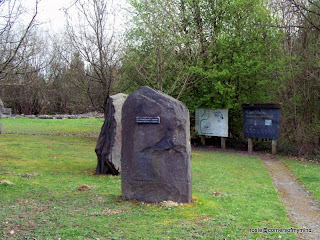 The modern stones commemorate the finding of the site of the early medieval chapel and have inscriptions in both Welsh and English.
Posted by Rosie at 1:54 pm