A Visit to Heage Windmill

In my post about our walk along the last section of the Monsal Trail - here - I mentioned our meeting with a couple of the volunteers on their stall at the Bakewell Farmer's market and our promising to visit the Windmill before it closed for the winter. Well, last weekend we managed to get there. 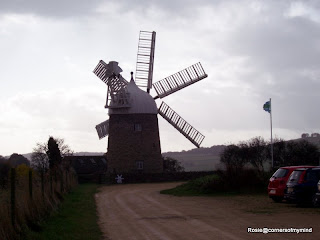 Heage Windmill stands very proudly on a hill overlooking the village of Nether Heage. From the car park you can see right across the valley towards Whatstandwell and Crich. On the photo below you can see Crich Stand in the distance. 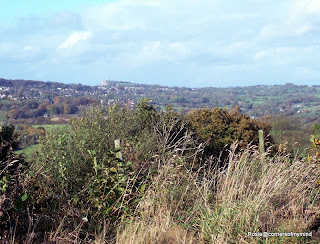 The mill is a Grade II listed building with six sails and a fantail, I thought it might be a smock mill but the information leaflets call it a squat tower mill. 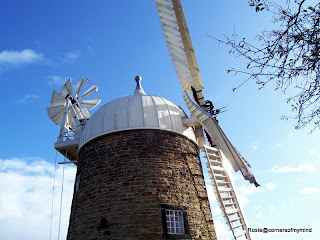 It was built in the 1790s and according to records originally had a boat shaped top or cap, four sails and no fantail. The sails and cap were blown off and destroyed by a violent storm in February 1894 and the owners rebuilt it with six sails. 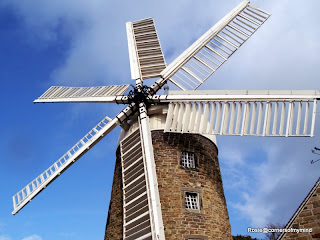 The mill, which stopped working in 1919, lies just within the Derwent Valley Mills World Heritage Site which streches from Matlock Bath and Cromford in the North to Darley Abbey and Derby in the South. It was left abandoned until 1966 when it was purchased by Derbyshire County Council. Heage Windmill Society, which now administers and cares for the mill, was formed in 1996 as a registered charity and volunteers from the Friends of Heage Windmill act as guides and interpreters of the site. 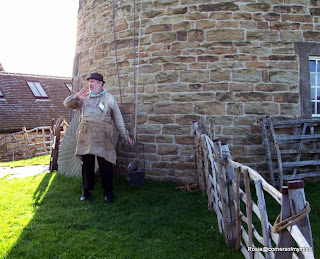 Our guide showed us around the outside of the mill and the miller himself told us about the workings of the sails and set them in motion for us. It was quite a windy afternoon and the noise of the sails going round and round was amazing on the outside and on the inside too. You can see a sail passing by one of the windows on the top floor in the photo below. 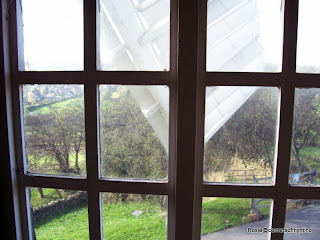 The guide was very informative and the miller kept popping in to answer questions too. The Miller is a very skilled man who knows by touch how to grade the flour and alter the settings of the grinding stones to produce different flour textures. He also knows when it is safe to set the sails in motion, something that is learned through experience over many years. 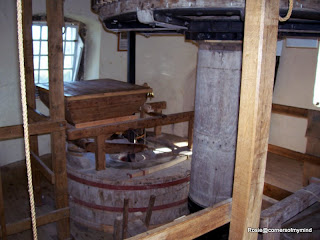 The Millstones used for milling the flour are now made from French stone; the original Derbyshire millstone grit stones are not used anymore because of the small pieces of grit
which would get into the flour. 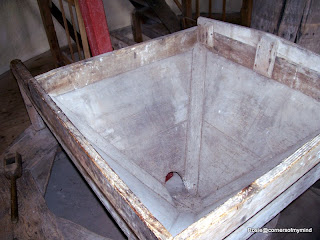 Because the mill now produces flour for sale to help with its upkeep several Health and Safety regulations have to be followed - many of the working parts have been enclosed to guard against dust and contamination of the flour but there are plenty of 'hands on' replicas of how the mill would have worked before these regulations. 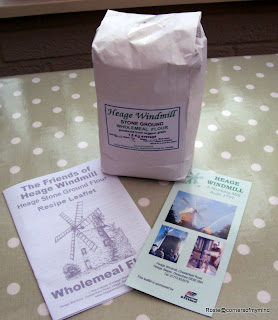 We bought some flour and were given a recipe leaflet to go with it. If you are interested you can read more details about the history and restoration of the mill on the Society's website - here.
This is the first time I've put a video clip on my blog so I hope it works. Apologies for the curious angle at which I took it - I was standing at the bottom of the mound on which the mill stands and not even sure if I was filming at all as I've never done it before.