The garden is going through it's second 'yellow' phase at the moment mainly due to the Hypericum plants we have dotted around. 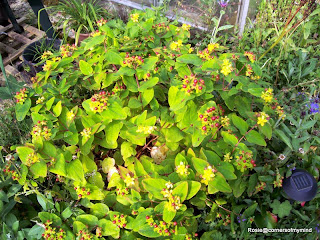 This one is hypericum androsaemum or Orange Flair - it just appeared in the garden quite a few years ago now and it took ages to find out what it was until a visitor said that it might be St John's Wort and we were able to identify it from this comment. We moved it earlier this year and it has done well but we must have left part of the plant behind in its original place as we now have two of them. 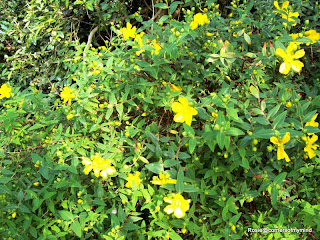 This one is hypericum calycinum or Rose of Sharon - we have two quite large bushes of this at either side of the garden both inherited when we moved here. 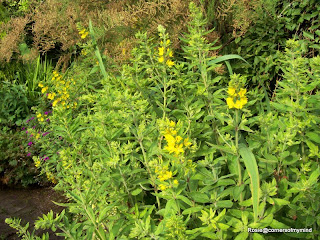 This is another plant that appeared one year it's Yellow Loosestrife and can be an absolute pain because it spreads very quickly and you have to be quite ruthless in pulling it up - but still it survives - I leave this clump here because it is quite pretty. 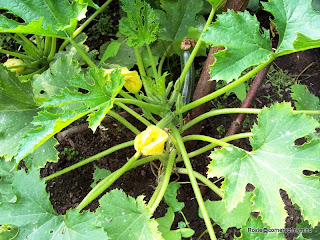 The courgettes are coming at last - we had a glut of them last year but this year they seem to be struggling. We have had a couple of cauliflowers, which is a bonus, as they too looked as if they weren't doing very well - I love cauliflower cheese and we make a huge one as a main meal with pasta, tomatoes and sometimes sliced mushrooms in it too - a sort of cauliflower/macaroni cheese with added extras. It is very tasty. 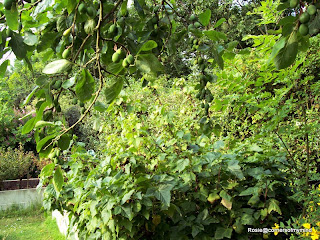 There are loads of plums on the plum tree and the blackcurrants are ripening too - as are the gooseberries - in fact I made another crumble last night. 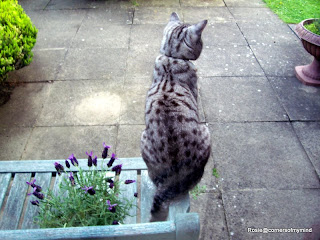 This is Caspar - he isn't our cat but visits us often - yesterday he got in through an open window and ate Max and Chloe's food - he is a gorgeous cat though and I couldn't resist taking this photo of him.
Posted by Rosie at 6:47 am