A Morning walk around an Historic Town

It seemed ages since we were last in Nantwich, a lovely town just a few miles away from where we live famous for its many timber framed buildings; so yesterday, as at last the sun was out but the garden still too wet to work in, we decided to have a morning out.

The town itself is full of lovely buildings everywhere you look so I though I'd take my camera along and share some of them with you. The house below is Churches Mansion and it is now just off a roundabout as you enter the town from the east side. I had to wait ages to get a photo without cars whizzing around the roundabout but patience finally paid off. 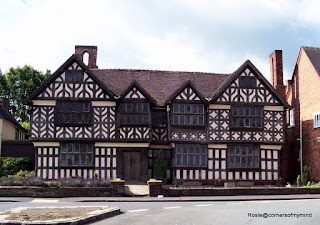 It was built in 1577 and is one of the town's oldest buildings, having survived the great fire of Nantwich which destroyed many of the town's buildings in December1583. The builder, a rich merchant called Richarde Churche, employed local master carpenter Thomas Cleese to work on his new mansion. Thomas Cleese also worked on nearby Little Moreton Hall. According to the plaque outside the mansion the building used to be moated. 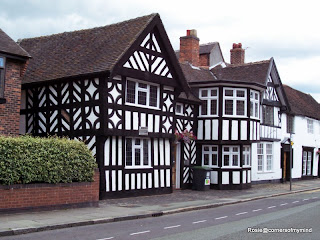 Another building to survive the fire is Sweet Briar Hall which can be found just a little further along Hospital Street this was built at the end of the 15th century and the octagonal bay added in the early 16th century; according to local records the fire claimed the building next to it and stopped before it reached the Hall. During the 18th century it was the home of noted chemist and minister of the local Unitarian church, Joseph Priestley who, with other scientific and industrial luminaries of the age like Matthew Boulton, James Watt, Josiah Wedgwood and Erasmus Darwin was a member of The Lunar Society. 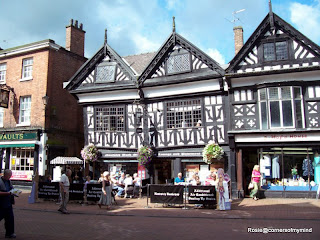 I said in a recent post that I would love to own a bookshop with a cafe attached. Well, how about this one? The Nantwich Bookshop, housed in a building erected after the fire in 1584, is a wonderful place and last time we were there the cafe was up on the first floor but this time it had spread outside onto the pavement. I guess they needed more space as there was always a queue for tables inside. The outside cafe added to the great atmosphere as across the market square was the local farmer's market. 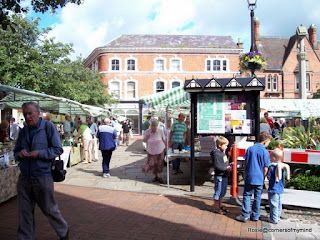 There was some wonderful local produce for sale, fruit and veg, meat, bread and cakes, cheese, pies and herbs and spices. It was a joy to walk through and gaze at all the wonderful goodies on offer but we were soon off to find more buildings. 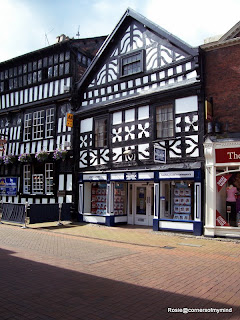 We walked down past the Crown Hotel built in 1588 just after the fire, and peered into the Crown Mews before heading off across the River to one of my favourite streets in the town. 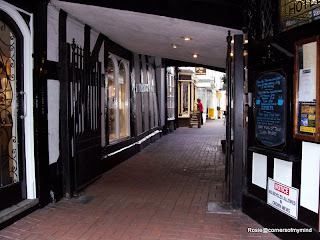 Welsh Row is across the River Weaver and was, before the by-pass was built, the main road through the town towards Chester. We walked up the Row as far as the viaduct which carries the Shropshire Union Canal across the road. 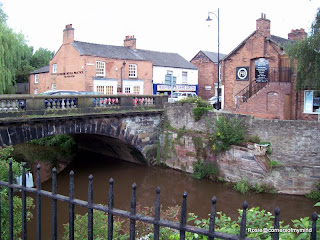 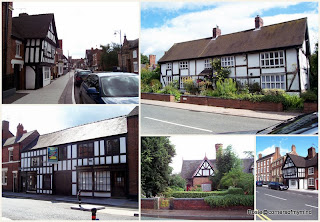 We reached the top of Welsh Row and climbed up the steps to the canal; below are some of the modern houses built in the last few years at the top of the row near the canal. 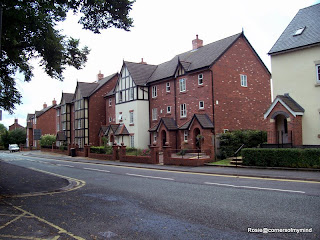 We walked back towards the town - it was time for refreshment so we went into Curshaws Hotel (below) and had coffee and toasted tea cakes sitting in their outside courtyard at the back of the building near the mews appartments that make up the modern part of the hotel. This building was until recently called The Cheshire Cat and way before that was known as the Widow's Almshouses converted in 1676 into cottages to house six poor widows of the town. 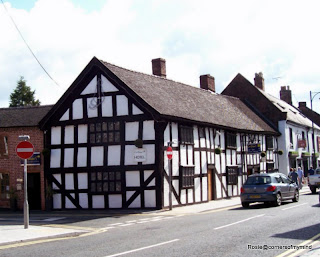 We headed back into town and visited St Mary's Church. We could still get inside even though the outside was shrouded in scaffolding and tarpaulin. The interior is very impressive and the volunteer guides were very friendly and informative. Then we walked along Pillory Street to the Museum which is housed in the old Free Library building next to the modern Cocoa Yard, built on the site of the Cocoa House started in the 19th century by the Temperence movement. 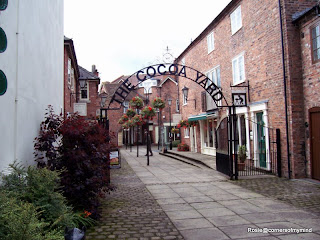 The Museum is dedicated to the history of the town and its growth from Roman times as a salt manufacturing area. There are some interesting displays including one on the Salt Ship discovered during an excavation on Welsh Row in 2004 on the site of a medieval salt works. It was hollowed out from an oak tree and isn't a sailing vessel but one for storing brine before it was boiled to produce salt. There was a small display about John Gerard the 16th century herbalist who was born in Nantwich and there were, of course, displays on the great fire of 1583 and also of Nantwich's role during the English Civil War- the town stood alone within Cheshire in support of the Parliamentary cause and their army took the town in 1643 and withstood the Royalist sieges until in January 1644, they were rescued by General Sir Thomas Fairfax. This great Parliamentarian victory is celebrated in the town every year on the nearest Saturday to 25th January - called Holly Holy Day because the relieved people of the town wore springs of holly in their hats to celebrate. 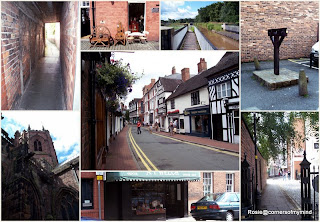 Above are some more scenes around the town
Posted by Rosie at 2:53 pm