I've been aware for ages that there were Saxon Crosses to be found in the centre of the town in Sandbach in Cheshire but had never been either to the town or to see the crosses.  It isn't very far to travel up through the Potteries and out into South Cheshire so we decided it was high time for a visit. 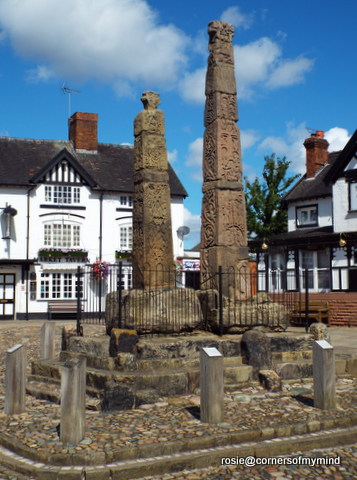 The town itself was delightful with many old buildings. We made our way from the Waitrose car park through a modern shopping area into the town.  It wasn't long before we spotted the crosses on The Cobbles. 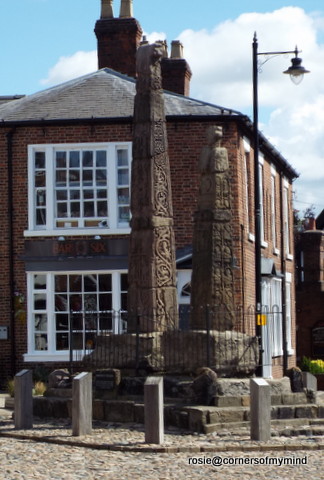 I thought that perhaps they may have cars parked near them or that perhaps people would be sitting nearby but thankfully they were completely clear and we could take a few photos without intruding on anyone.

These two crosses are Grade 1 listed, made of sandstone and would originally have been brightly painted and decorated with jewels and metal work. They have been dated to around the 9th Century and are thought to be some of the most important monuments connected to the Saxon Kingdom of Mercia.  The taller of the two crosses is about 16 feet or 4.8 metres high and the smaller is 11 feet or 3.3 metres high.  There was reportedly a third cross. 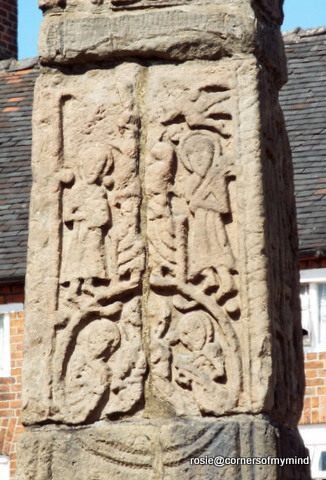 The carvings draw heavily on the motifs and techniques of metal working and show the prestige of the jeweller in Anglo-Saxon Society.  There are also Scottish and Continental influences in the depiction of the biblical scenes carved into them. 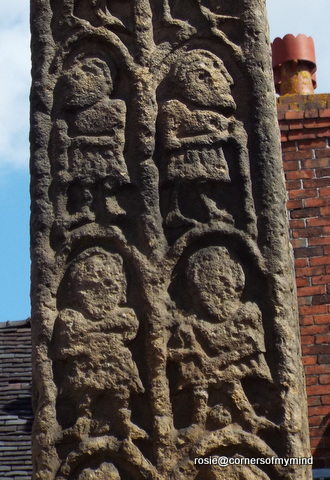 The first mention of the crosses comes in 1585 when they were to be seen in the market place after the town had been granted a charter for two fairs and a weekly market.   They were dismantled in the 17th century because the Puritans didn't like religious imagery and disappeared into people's garden walls and footpaths. They were found by local antiquarian George Ormerod in the early 19th century (c. 1816) and gradually pieced together.  Similar sandstone was used to replace the missing parts. 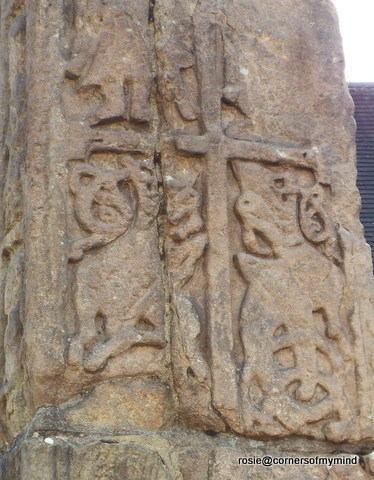 There are more pieces to be found in the nearby churchyard. They could be pieces of the third cross. They were moved there for safety in 1950 when the crosses came into the hands of the Ministry of Works.  They are now cared for by English Heritage. 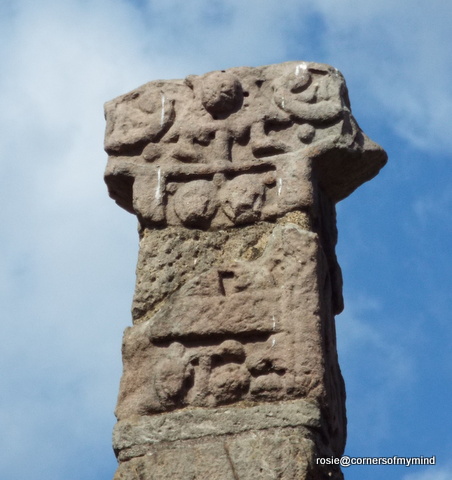 On one side of the smaller cross is depicted the story of King Paeda of Mercia, son of pagan King Penda, who converted to Christianity c650. 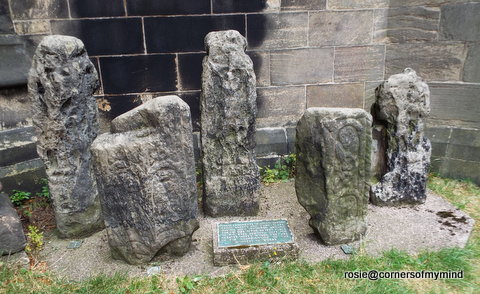 St Mary's Church is quite large and had three wonderful arches under the tower.  The tower sits over a public footpath which passes under the arches. 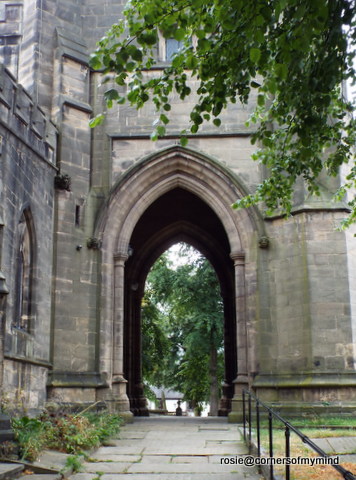 As I wandered under the arch I spotted the early carved memorial stone below. 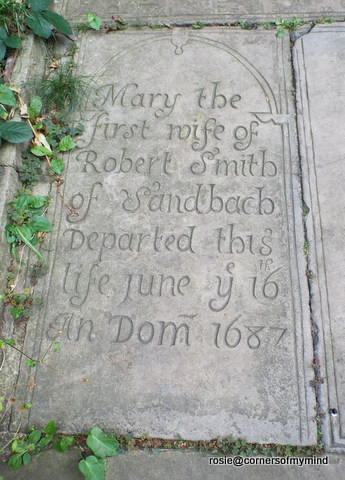 It is dedicated to Mary, the first wife of Robert Smith who died in 1687. 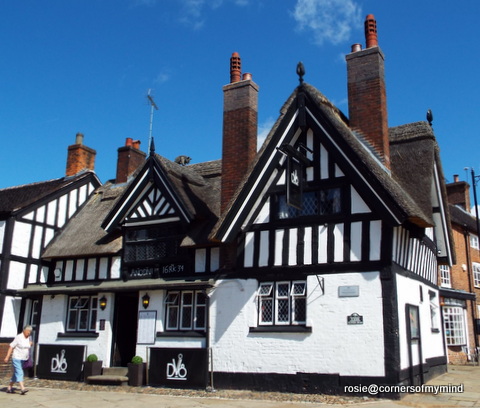 Back in the town we had a wander around a few street and shops.  Above is 'Ye Olde Black Beare Inn' built in 1634.  It is the last remaining thatched building in the town centre. 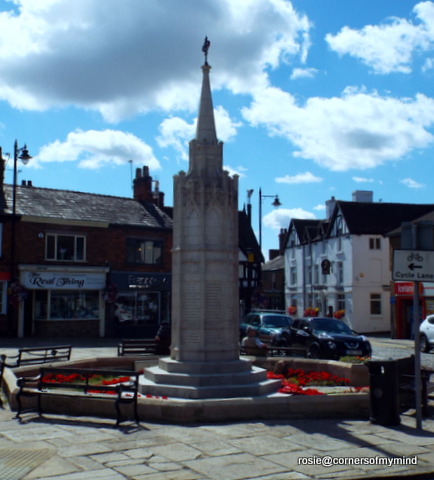 Opposite, and not far from the Saxon Crosses is the War Memorial. 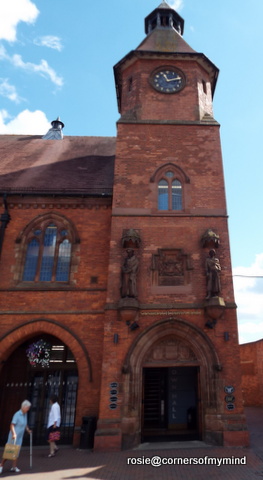 The front of the Town Hall which dates from 1889 and retains many of its Victorian Gothic features.  The interior was refurbished in 2013. 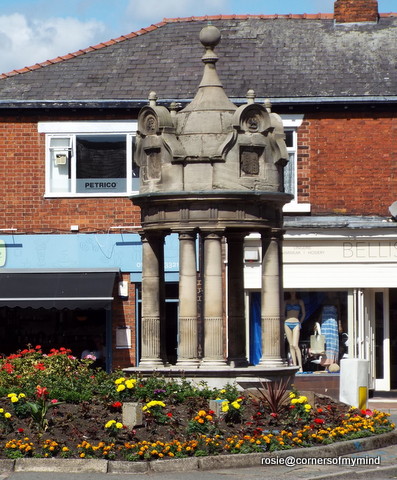 Above the drinking fountain of 1897 is Grade 11 listed and designed by Thomas Bower architect of the town hall. 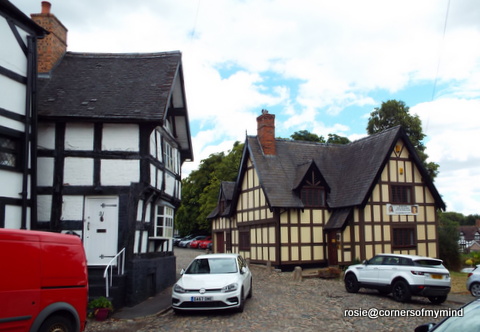 The pub on the left is called The Lower Chequer. 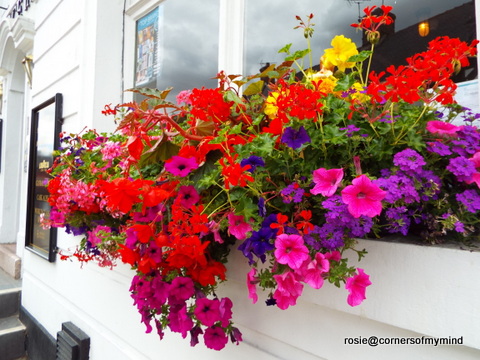 There were some lovely window boxes and hanging baskets decorating some of the shop, pubs and houses in the town.

I was intrigued by the name of this street but have as yet been unable to find out anything about it's origin.