As promised in my last but one post I'm returning to the lovely, historic village of Bonsall to take you inside the parish church.  I've saved this post until now especially for Church Tourism Week.  This is organised by The Churches Conservation Trust, although this isn't one of the churches in its care, I thought it was an apt time to record my visit. 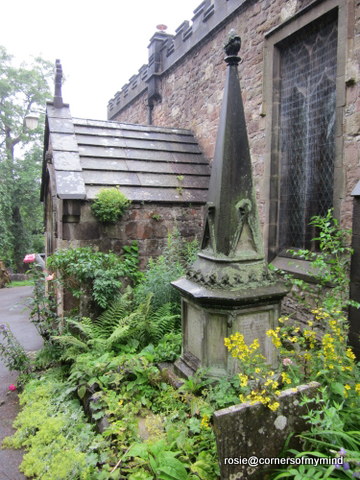 After our lunch at The Fountain Tea shop (see my post on Bonsall Village)  we walked up to the church.  I hadn't expected it to be open but it was.  Unfortunately I'd left my bridge camera in the back of the car but I had my little Cannon Power Shot camera in my bag so I was able to take a few photos. 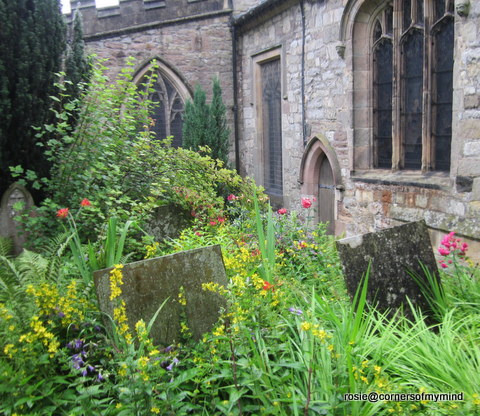 There wasn't a guide book or leaflet inside the church so I took photos of the things I'd noticed realising that I'd probably miss something important along the way.  I've since been 'googling' to find out more about the church and the various things I'd recorded. 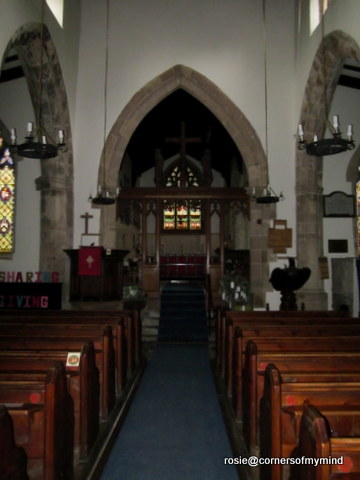 The most obvious and fascinating aspect of the church was the difference of the floor height  between  the nave and chancel.  A few steps up from Nave to Chancel are expected but in this church there are seven.  The bottom and top ones are thinner than the others. 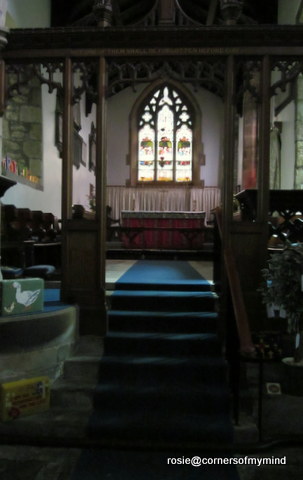 From reading various blogs and reports it seems that the level of the  nave floor was dropped in the 14th century and this may explain the extra steps up into the Chancel and the rather large column bases in the nave.  This has given the church the honour of being known to have what is possibly the highest Chancel in the country. 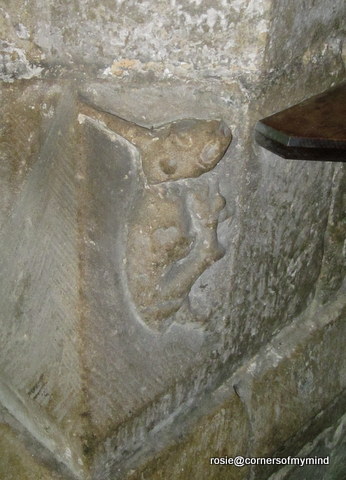 On the base of one of the columns is a strange carving which some sources say might have been underground until the floor level was dropped.  It is known locally as the Bonsall Imp or the Little Devil although it has also been described as a cross between a frog and a unicorn.  . 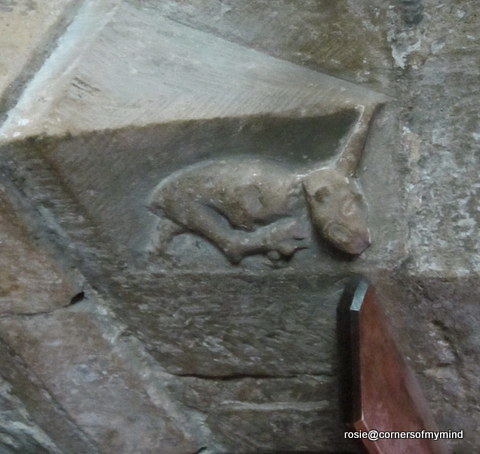 I can see from the one horn on the head and the webbed looking feet where this idea of the image came from. 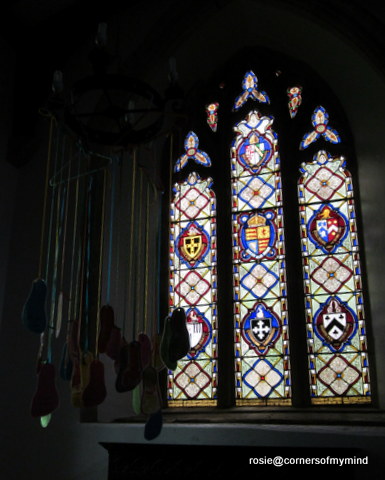 At the top of the North aisle a modern glass mobile hangs in front of the window reflecting the colours of the stained glass. 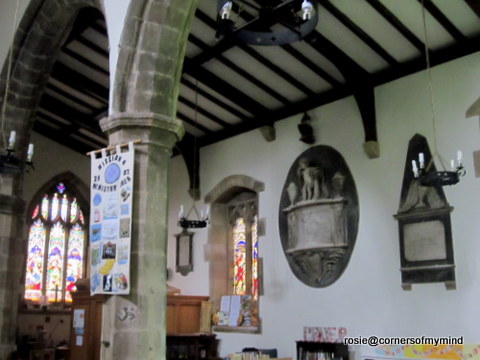 There were some interesting wall monuments to the great and good of the village.  The large one oval one on the wall is a memorial to a man called Henry Ferne who died in 1723 having served as Receiver General of the Customs during the reigns King William III, Queen Anne and King George I. 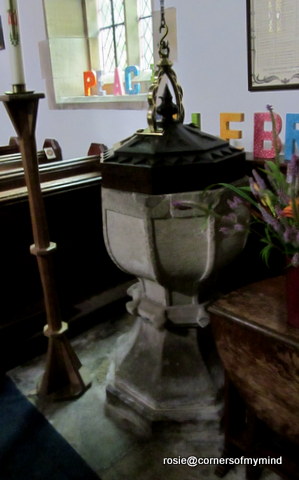 The font is probably from the late 12th or early 13th century. 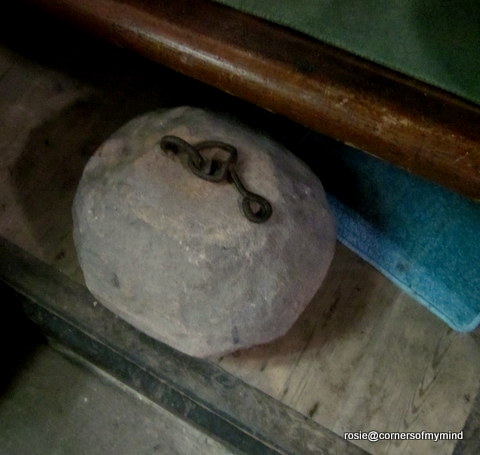 The unusual stone above is in the South aisle and is a bull baiting stone.  It was brought into the church by a former Rector who was so upset by the idea of bull baiting that he had the stone removed from the market place into the church.  Animal baiting was finally made unlawful twenty years later in 1835. 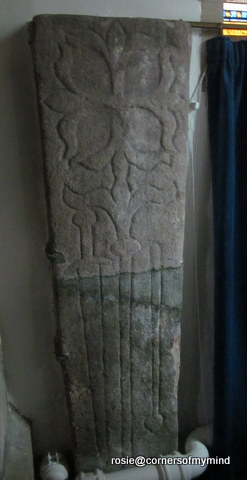 Above is one of the two Medieval stone grave  slabs that stand either side of the alter in the South aisle, not far from the bull baiting stone.  The other was behind a banner and couldn't be photographed easily although it was thicker and slightly more elaborate than this one.  They were moved out of the church during the restoration of 1863 and ended up in a churchwarden's garden. 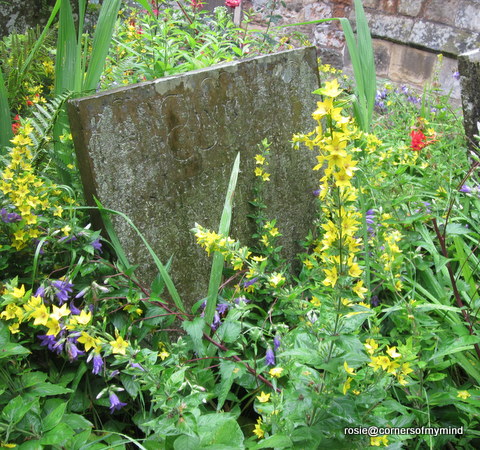 The churchyard was full of both wild and garden flowers which look lovely against the grey weather worn stones.

I'm experiencing great difficulty with internet speed at the moment and we are not sure what the problem is.  I can count to twenty or sometimes even thirty before getting on line then the time to move between sites is about the same, reading and commenting on blogs takes ages as pages keep jumping about and scrolling up and down takes ages as the screen seems to freeze.  It has taken me two or three days to complete this post so I may have to take a break for a while until the problem is solved.
Posted by Rosie at 7:17 pm