Sydney Parkinson (1745 -1771) was a botanical artist and draughtsman who was employed by Joseph Banks to accompany him on the first voyage of Captain James Cook to Australia and South Seas on HMS Endeavour.

He was born in Edinburgh in 1745 to a Quaker family and was originally a woollen draper.  He studied drawing especially the drawing of plants and flowers.  On moving to London he was discovered by a young Joseph Banks and employed by him to draw plants at Kew botanical gardens.

In 1768 he was hired by Joseph Banks to accompany him and topographical draughtsman Alexander Buchan, who died in Tahiti during the voyage.  Parkinson took on some of his work painting plant specimens on board ship often in the most difficult and trying conditions.


Poor Sydney never made it home from this voyage as he contracted dysentery and died at Cape Town on the return journey on 26th January 1771.  He was buried at sea. 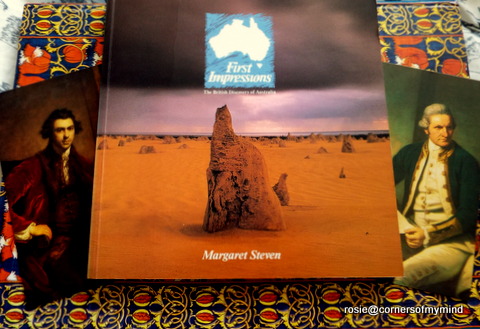 I've written about Sydney Parkinson because I found the catalogue above on the book shelves (whilst looking for something else, as you do) and then I remembered visiting the exhibition at the Natural History Museum in 1988 where I bought the book and several postcards.  I'd gone with a colleague from a Museum where I used to work when we were researching for an exhibition we were putting together about local adventurer and seaman Matthew Flinders.

Joining in with Barbara at Coastal Ripples for Paint Monthly follow the - link - to see other bloggers who are participating this month.
Posted by Rosie at 11:48 am