It's Friday so I'm joining in with  Amy at Love Made my Home for this week's Five on Friday.  Click on the link at the bottom of this post to find others who are joining in too.

The last week has seen the transition from February to March.  There is an old saying 'March comes in like a lion and goes out like a lamb' well the 1st of March wasn't very lion like although the day after certainly was with lashing rain, sleet, snow, hail and howling, branch snapping winds.  Definitely a day to stay indoors.  This week will see five notable or seasonal events and these will be at the heart of my Five on Friday this week. Another old saying we learnt at school and which I still remember today is  'Thirty Days hath September, April, June and November all the rest have thirty one, except February which has twenty eight days clear and twenty nine each leap year.'  People born on the 29th February only have a proper birthday day during leap year and they are known as Leaplings.  During my lifetime I've only known one person born on the 29th February and he always celebrates his birthday on 1st March, except in leap years of course. 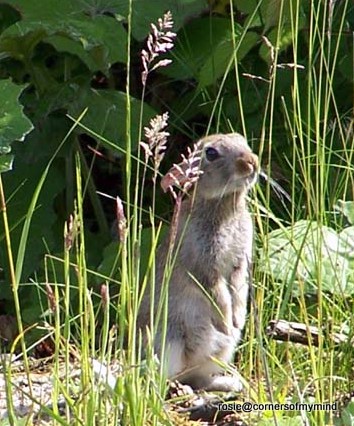 The rabbit in the photo above is not a white rabbit of course, but is an extremely charming rabbit photographed a few years ago on one of our walks and he or she seems to fit in here.
When we were children we always had to remember to say 'White Rabbits' on 1st of March and it also had to be the first thing you said on waking up, the reasons why are lost in the mists of time but it was something to do with nice surprises.  There was another saying which relates to the first of any month 'Pinch, Punch it's the first of the month'.  I don't remember this one as a child but it was probably around although I'm sure I'd remember lots of pinching and punching in the playground so it wasn't as well known as 'White Rabbits.' 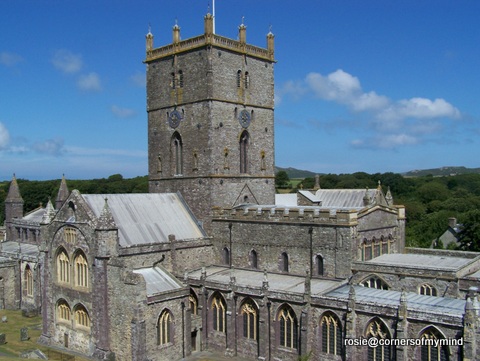 St David's Day is a day of huge celebration for anyone from Wales.  St David (Dewi Sant) is the patron Saint of Wales.  He was born in Caerfai in Pembrokeshire around 500AD.  Studying under St Paulinus in Cardigan he founded twelve monasteries in his lifetime.  It is thought he died on 1st March 589 and his remains are buried in St David's Cathedral in the small city of St David's in Pembrokeshire.  Above is a photo of St David's Cathedral taken when we visited in the summer of 2006. 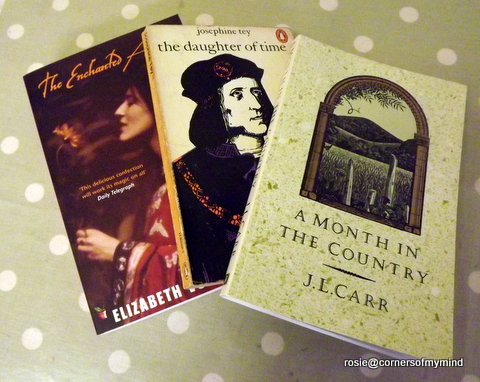 
Books play a large part in my life and always have since early childhood.  I like nothing better than to curl up with a good book.  I have happy memories of the books I read as a child and of my visits to the local library to choose books to take home to read and I still love visiting our local library to choose books to read.  One of my favourite books, in fact possibly my favourite,  is 'A Month in the Country' by JL Carr.  I think I've written several posts about it over the years and I still re-read it often.  I last read it after we'd been to see a wonderful stage adaptation, by the North Country Theatre, a couple of years ago so it is due for another re-read soon.  I loved the film they made of it, over twenty years ago now, with Colin Firth and Kenneth Brannagh in the lead roles, as it was so true to the book. It is just a shame that no DVDs of the film are available.  I wonder if they will ever remake it with new actors in the rolls?  Another favourite book (and film) and due for another re-read soon is The Enchanted April by Elizabeth von Arnim but I think I'll wait until April for that. Another book I love and re-read often is The Daughter of Time by Josephine Tey and I've also written about this one in several posts about Richard III. 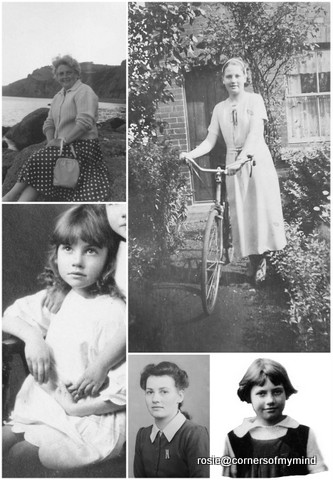 Have a lovely weekend everyone