Yesterday we went for a walk along the trail in the Manifold Valley and on our way home we visited the lovely village of Alstonefield. 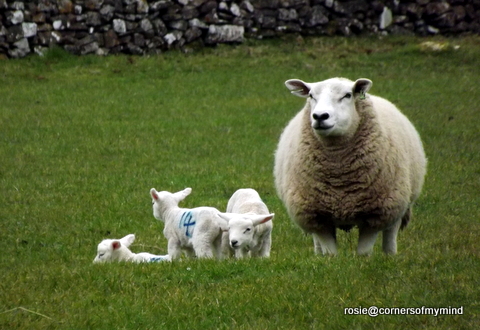 We parked in a free car park on the outskirts of the village and above is the first thing we saw in the field over the stone wall.  I'd been hoping to see some lambs whilst we were out and about and sheep number 14 didn't disappoint with her three lovely little ones. 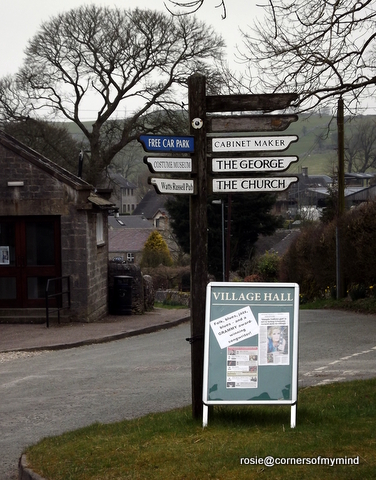 We were headed towards the church not knowing if it would be open or not but I wanted to see what it looked like.  Of course it was at the opposite end of the village from the car park but not too far to walk and there were some lovely buildings to see along the way.  It really is a beautiful, historic and well kept village.  There were groups of walkers sitting on the communal green areas just resting or eating sandwiches. 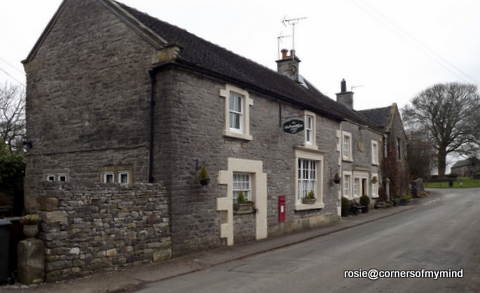 We wandered past the old post office now a private house.  I'm never happy about taking photos of people's homes without their knowledge but I thought as this had once been a very public building and was of historical interest that they perhaps wouldn't mind. 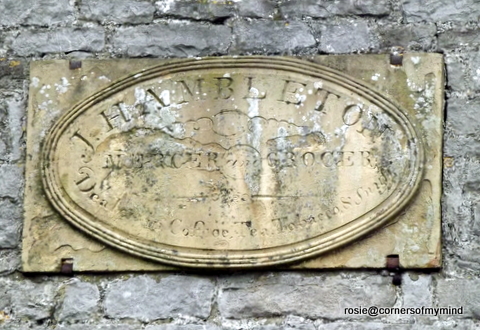 Over the door was a sign that the building had also been a shop.  It says...
J Hambleton,  Mercer and Grocer, Dealers in Coffee, Tea, Tobacco and Snuff.

I've recently been reading a book about the rise in popularity of coffee houses in the late 17th and 18th centuries and as well as coffee,  tobacco and snuff featured heavily in what was consumed in these places so I found this sign of great interest. 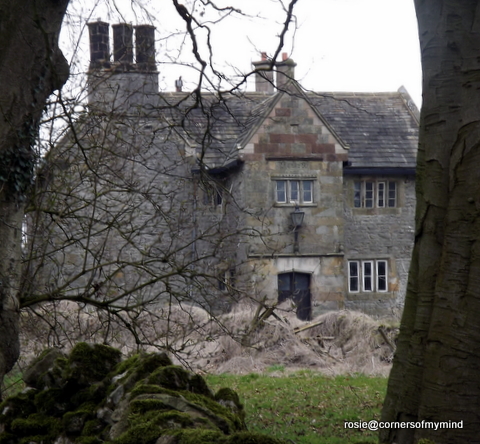 This lovely stone house stands opposite the church and judging by its small windows and large chimneys it is quite an old building.  On a map I found on line it is labelled The Hall and dated 1587. 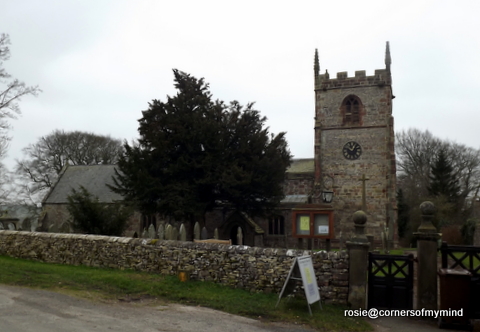 St  Peter's is a twelfth century church which was altered and renovated in 1590 and again in 1870. 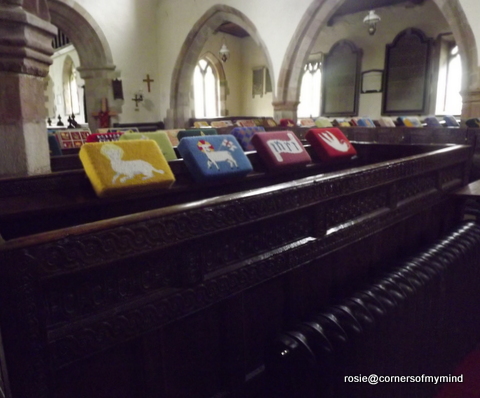 Inside is warm, bright and clean with colourful kneelers attached to each of the carved box pews. 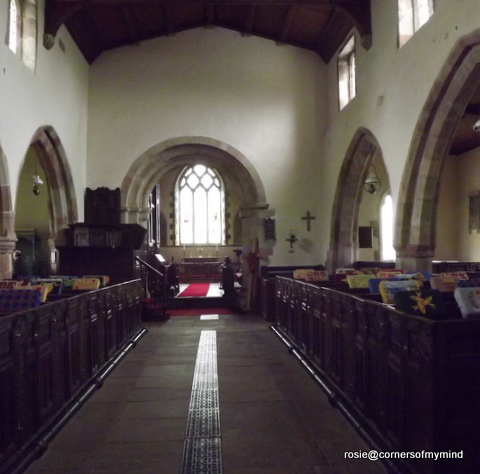 The Norman Arch in the chancel was completed in 1100 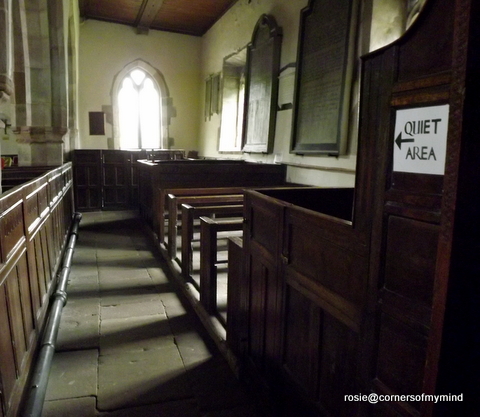 The low pews were built in the 17th century 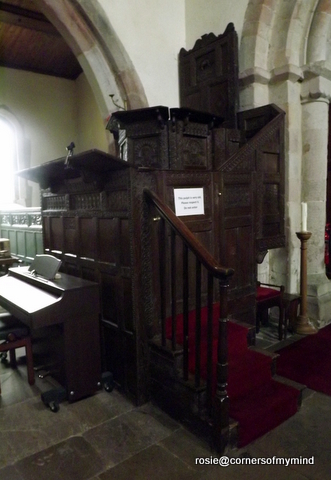 The carved two tier pulpit used to have three tiers 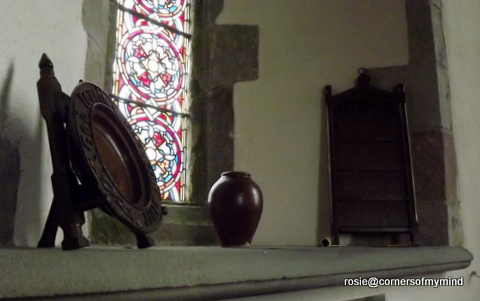 I did take a photo of the bells in the tower but I'm afraid it didn't turn out so well.  I was interested because four of the bells came from the now demolished church of St John's in Longton, Stoke-on-Trent.  I often walk through the old churchyard and under the railway bridge on my way into the town. 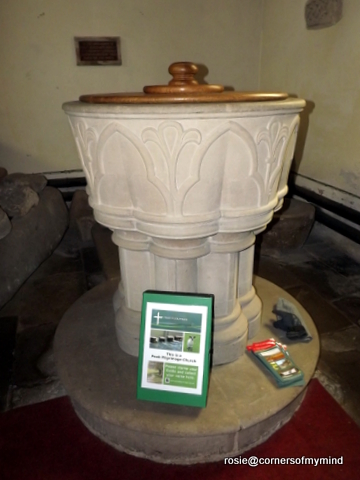 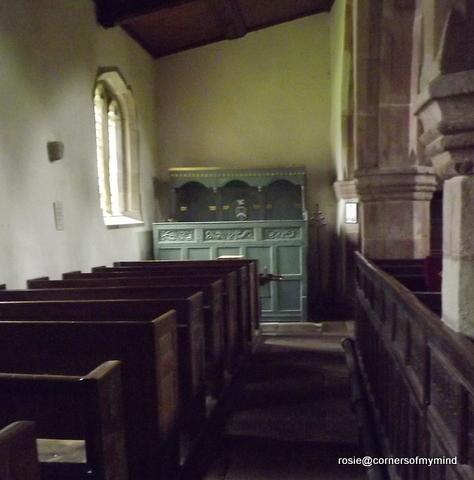 Apparently the painted pew at the end of the aisle belonged to the Cotton Family of Beresford Hall.  One of the members of the Cotton family, namely Charles Cotton was the co-author with Isaac Walton of The Compleat Angler first published in 1653. 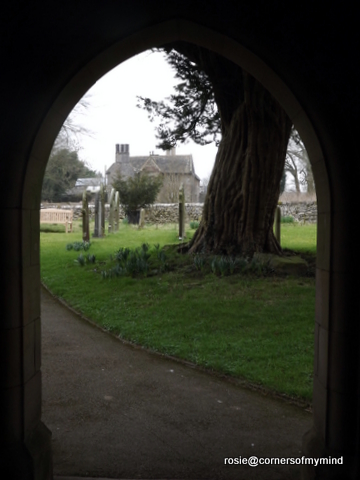 Another view of the old hall through the church doorway. 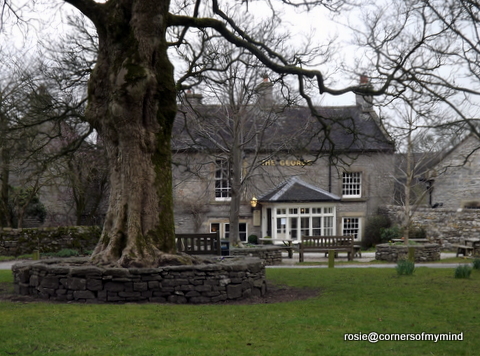 In the centre of the village is the George Inn.  Behind this inn there used to be a wool market and on Church Street was a button factory making silk covered buttons. 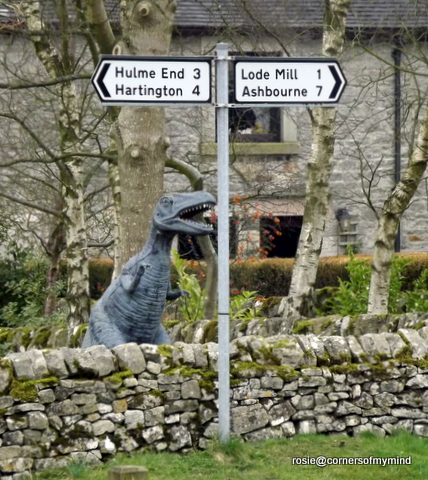 As we arrived in the village I saw some animals I had hoped to see and as we left we passed by a creature I certainly hadn't expected to see. 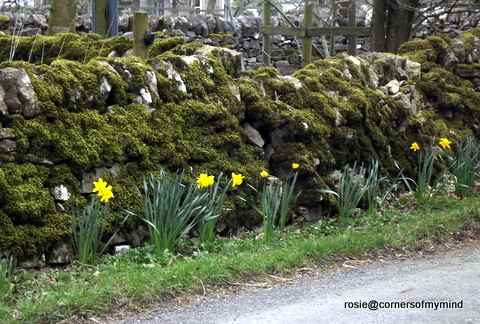 All for now, I'll be back in a few days with more of our walk in the Manifold Valley.
Posted by Rosie at 2:43 pm