A Walk to Thor's Cave

I mentioned in my last post on  Alstonefield that we had been on a long walk before we got to the village.  The walk was along the trail in the Manifold Valley where the Leek and Manifold Light Railway (1904 -34) used to run bringing tourists into the valley and to Thor's Cave. 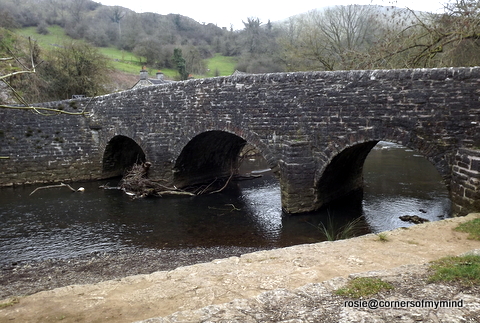 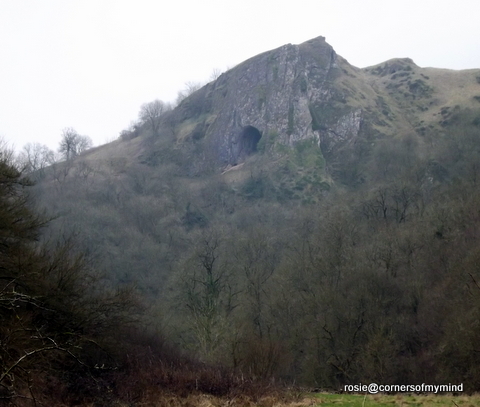 We could see the cave in the distance. 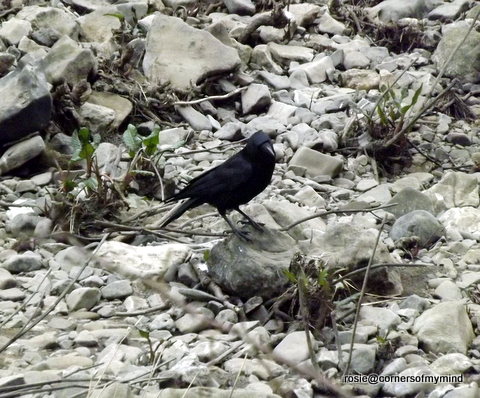 The track follows the line of the dry river bed.  It's dry because the river flows underground at this point. 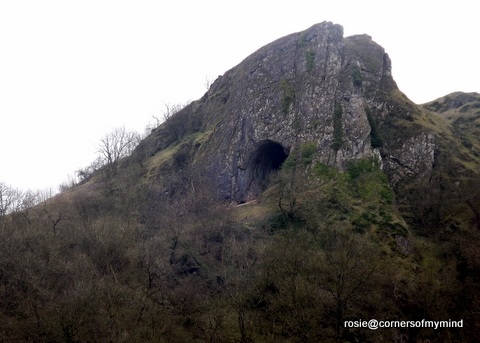 We were getting closer to the cave, the question was should we or shouldn't we try to make it all the way to the entrance? 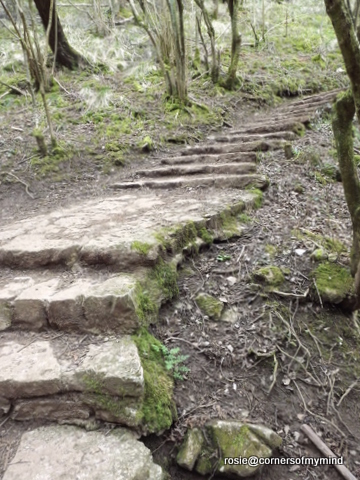 The answer was yes, we would give it a try.  So up the stone steps we went, in defiance of ageing knees. The route curves up and round amongst the trees. 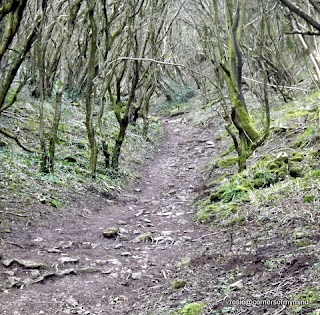 Gently winding upwards, not a soul in sight, just the sound of woodpeckers beating out their rhythm on the trees. 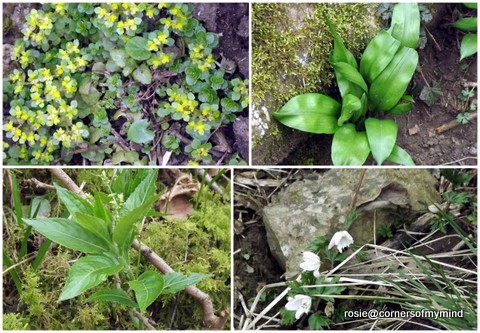 We saw some lovely wild flowers and plants along the way including wood anemone, dog's mercury and wild garlic. 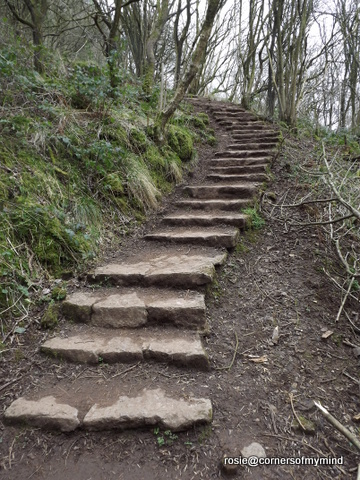 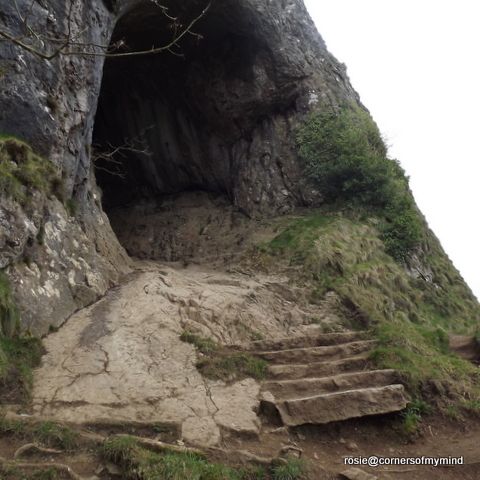 Until we got to the entrance.  We passed a group of walkers, three ladies with Nordic walking poles, on the way down and there were a couple of people and a dog just coming out of the cave as we arrived. 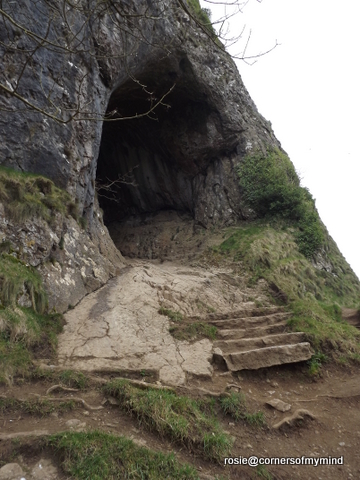 Next question - could I get inside?  It is about 10 years since I'd last been inside so I was determined to try. 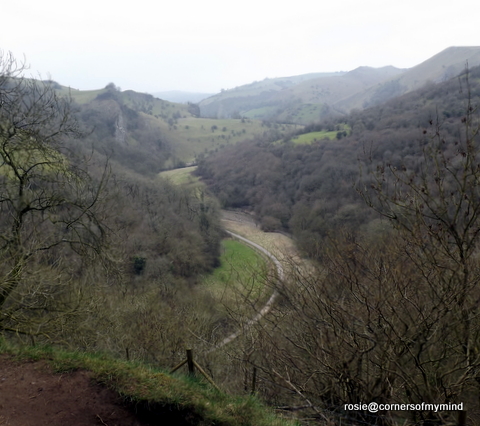 A last look at the way we had come and then it was time to scrabble and scramble looking for hand and foot holds to get inside. 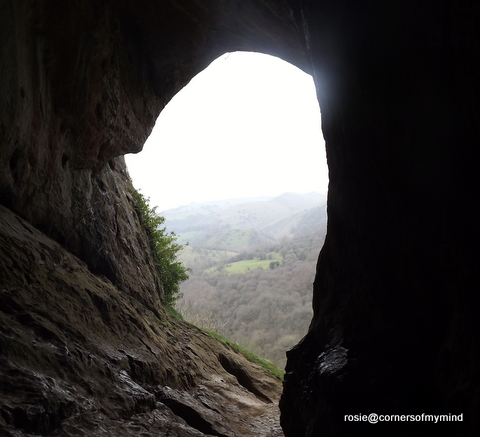 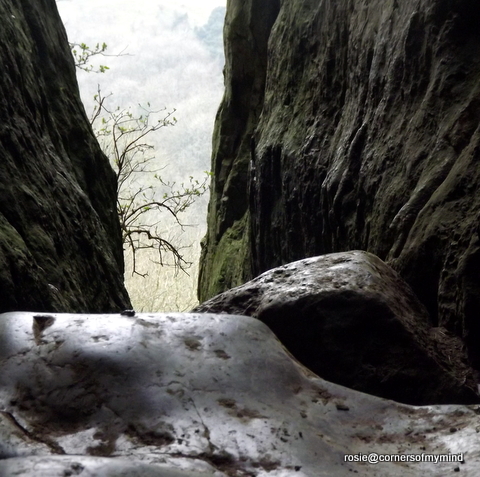 The next things was to take a few photos to prove it whilst trying not to worry about how I was going to get out, as you can see the rock was quite smooth and slippy underfoot. 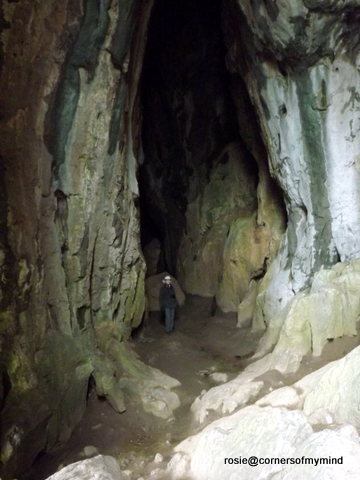 It was quiet, apart from the cawing of crows and jackdaws. 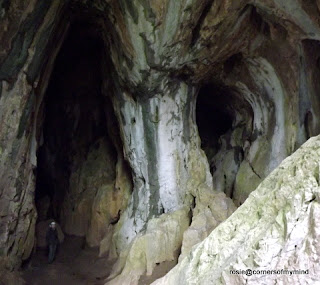 The cave was like a natural cathedral its walls soaring high up above. 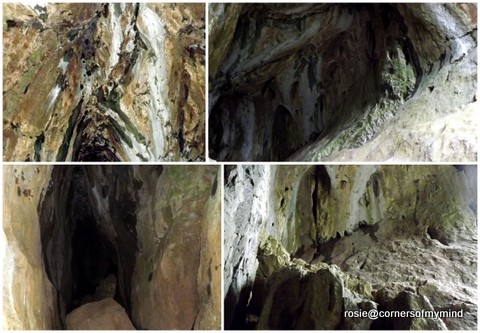 The colours and textures in the limestone rock were wonderful. 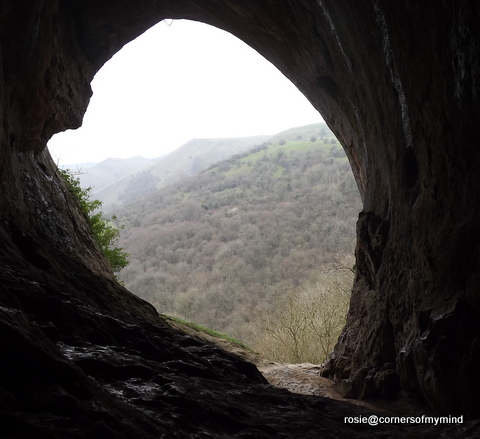 Excavations have shown that the cave was occupied from about 10,000 years ago and was probably occupied up to Saxon and Roman times making it one of the oldest sites of human activity in the Peak District.  Finds from the cave can be seen in museums around the district including Buxton Museum. 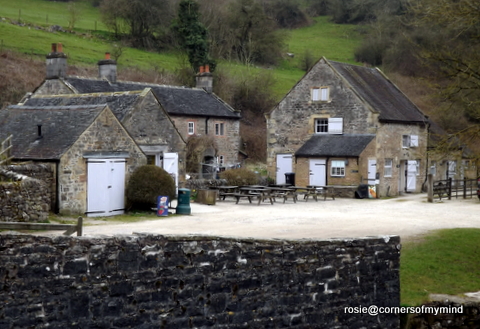 We walked back to the mill where we bought  delicious takeaway cheese and chutney sandwiches to go with the flask of coffee we had brought with us from home.  It was a lovely day, quite warm and spring like with no sign of Storm Katie waiting in the wings for the Easter weekend.
Posted by Rosie at 7:42 pm