Yesterday, whilst Paul was carving a pumpkin and making puree ready for a pumpkin pie, I made some soul cakes. 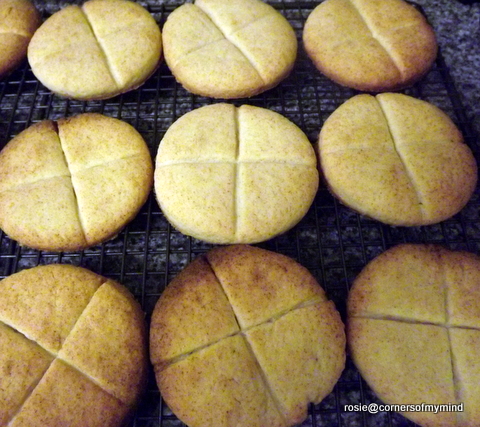 I was thinking about how times have changed over the last decades especially with the 'trick or treat' visitors but history has a habit of repeating itself and it seems that soul cakes were a forerunner of the requesting of treats at neighbouring doors.

Apparently the Soul Cakes or Souling Cakes were given out, not on All Hallows Eve (31st October) but on All Souls Day (2nd November) which follows All Saints Day on the 1st November.  Children and the poorer people of the town or village would go from door to door singing psalms and saying prayers for the dead.  Each cake eaten was said to represent a soul freed from Purgatory.  This custom dates from the pre-Reformation times of the Middle Ages, when bread was given out in return for prayers and psalms for those you have lost.

I had what lines I could remember of the song running though my head as I baked -
A soul, a soul a soul cake,
please good missus, a soul cake,
an apple, a pear, a plum or a cherry,
Any good thing to make us merry....&etc

In fact these little morsels aren't really cakes but more the consistency of biscuits.  The ingredients are simply flour, sugar, eggs, wine vinegar, butter and spices.  I wonder how much these ingredients differ from the original recipe?

340gm of plain flour, 170gm each of sugar and butter, 1 beaten egg, 2tsp white wine vinegar and half a teaspoon each of nutmeg, cinnamon and mixed spice.

Mix the flour, sugar and spice together. Slice and dice the butter and rub into the dry ingredients.  Then using a wooden spoon mix in the beaten egg and the wine vinegar.  It makes a stiff dough which should be rested in the fridge for about 20 minutes.  Roll out the dough and cut into rounds, marking the top with a cross cut.  Place on baking trays and cook for 15 - 20 minutes until light golden brown.  Mine were ready after 14 minutes.  I didn't have quite enough plain flour so I added a little bit of self raising to the mix to make the quantity right and I also added a bit more beaten egg (about one and a half) than suggested as the eggs I had, although labelled medium, seemed quite small.

Although the cakes look quite plain they are sweet and spicy and quite tasty.  They also, quite pleasingly, snap into four little pieces for eating purposes. 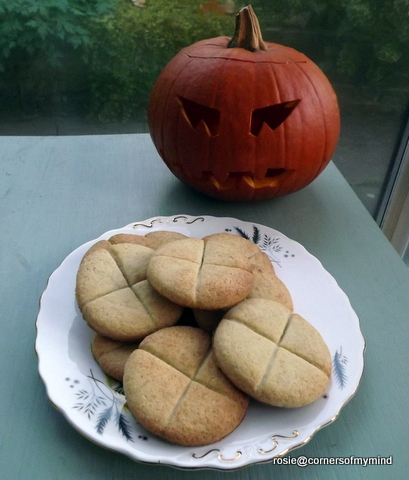 It would have been nice to give them out at the door but I'm sure they wouldn't have been appreciated so we had a bowl of mini chocolate bars at the ready. 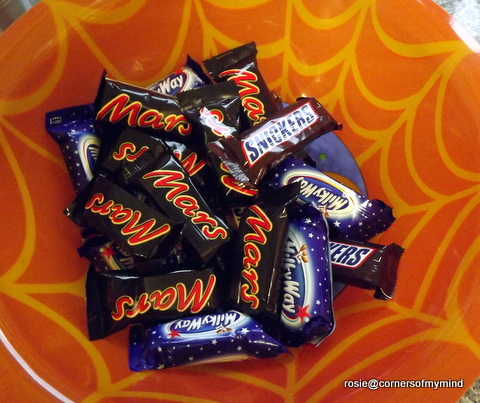 We had quite a few groups of small children with their parents waiting at the end of the drive and some older children too, all very good humoured and enjoying themselves, every bar went.  We had three girls dressed as clowns knock at the door, when asked why clowns they answered that they had read that some people find clowns quite scary, I can relate to that.  Another boy on his own said 'Trick or Treat' in quite a fed up, monosyllabic voice so Paul said that isn't very scary, lets try again and he shut the door and opened it again, the boy said 'Trick or Treat' in a far more animated way and took his bar.  I had a boy yell out 'Oh, I love Snickers' and then as they left he ran down the drive shouting 'Mum, they have Snickers at that house'.  It seemed like great fun but it is such a far cry from the days of the Soul Cake.
Posted by Rosie at 11:08 am