52 Weeks of Happy - Week Twenty One

If it's Sunday it must be 52 Weeks of Happy time.  I've struggled a bit this week as so many negative things have happened including a quite unexpected tax bill from four years ago because they didn't use the right tax code (why on earth didn't they find this in the same financial year?  It would have saved us lots of distress this year) a broken camera lens worth £200ish which fell out of the back of the car on Wednesday evening, an expensive visit to the vets with one of our cats on Friday and a leaking washing machine yesterday! Anyway we've said goodbye to the holiday money we had put aside.  Oh, well!  At least the cat is getting better which is cause for happiness. 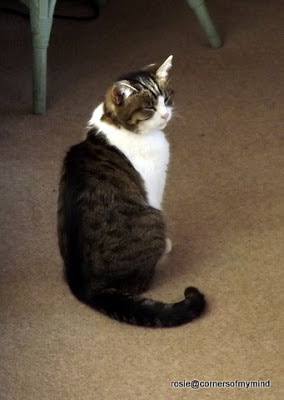 1.  A Well Cat - Chloe had to be taken to the vets on Friday morning, she had two injections, four extra syringes to administer orally at home and some capsules.  We dread capsules as she will not swallow them but we've been putting them in with her cat food and so far so good.  For the ripe old age of seventeen she is, according to the vet, in good condition and her kidneys, which are usually the first things to cause problems in a cat of her age, are healthy. 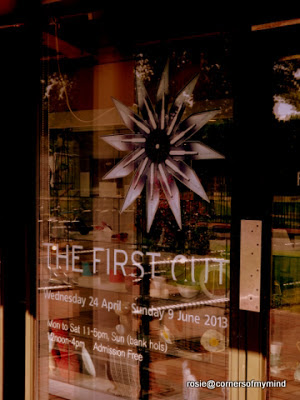 2.  A Day Out - On Wednesday we visited friends in Nottingham (see my last post) we had lunch at Relish in Beeston and then went to see a wonderful exhibition at the Djanogly Art Gallery on the campus at Nottingham University.  It was a fabulous exhibition called 'The First Cut' and was full of the most remarkable things all created from paper.  I was particularly taken with the enchanted forest by Manabu Hangai and the dresses and shoes made by Susan Cutts.  I also liked 'The Map of my Entire Life' by Rob Ryan who was the only one of the artists I knew of  as we'd seen one of his exhibitions at the Shire Hall Gallery in Stafford a couple of years ago.  The First Cut has already been seen at the Manchester Art Gallery and is apparently moving to Southampton later this year.  Apologies for the poor quality of the photo above but the sunlight was so bright outside and photography wasn't allowed inside. 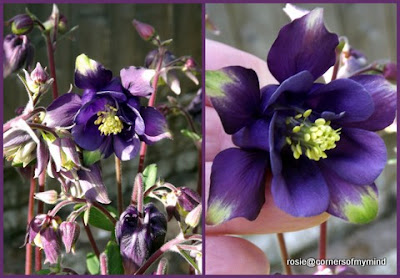 3.  Aquilegias - opening up in the garden.  I always moan about them as they have spread so much over the last year or two and have completely taken over some of the flower beds, they pop up everywhere and are so hard to get out of our heavy clay soil which they seem to grow quite easily in.  When they are in flower though they are just so pretty.  I love the colour of the one above and we also have dark pink, pale pink and white ones.  I've no idea where they all came from because when we first came here 16 years ago there were just a few dark pink ones. 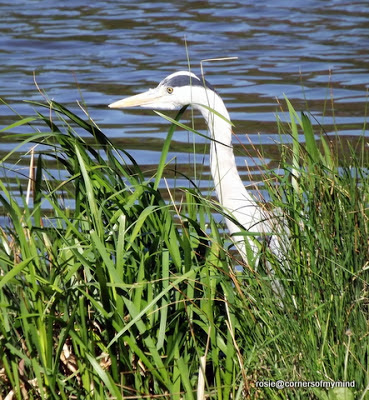 4. Heron and Geese -  I was rather pleased with the photos above and below which I took on the Lakeside Walk around Trentham.  We waited ages for the heron to take off so we could photograph it in flight but for some reason it was happy to linger - not something they normally do when humans are around! On the other hand the two greylag geese below were quite happy to pose for photos. 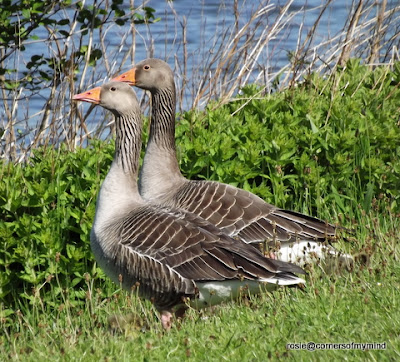 Link to  Little Birdie  where  '52 weeks of Happy' started. Each week you find just four things that have made you happy to share.
Posted by Rosie at 7:33 pm