No, not me but two dear friends, Robert and Susan, under my umbrella!  It wasn't raining but there was a special reason for them wanting their photo taken in this way.  I took the photo on Wednesday near the Lakeside Pavillion on the Nottingham University Campus where we'd gone to look at a wonderful exhibition in the Djanogly Art Gallery. 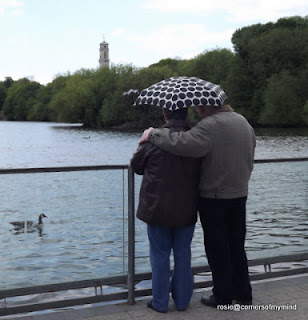 It was our friend Robert's birthday recently and we'd sent him a birthday card which I'd spotted at Bridgemere and which I thought he would like.  Inside the card as well as the normal greetings I wrote - 'I'm sure you can weave a magical story around the picture on the front and the little poem on the back of this card.  I look forward to reading it' - Robert has been attending a creative writing class over the last year or two and has written some super stories and poems.  When we visited on Wednesday, he asked if we could take a photograph of him and Susan which would recreate the scene on the birthday card as he wanted to put the story on his blog but couldn't use the illustration on the card for copyright reasons.  I was the only one with an umbrella so that was the reason mine was used.


Here is a  link  to Robert's blog where the story he wrote can be found - it is different to what I had expected but quite poignantly atmospheric.  I was moved by it.

Here is a  link  to the original print by Gary Bunt that the card was taken from.