Saturday found us driving towards Lincolnshire to pick up a dear friend and take her to a place she had always wanted to visit.  It was somewhere we wanted to visit too.  The A50 took us through Derbyshire into Nottinghamshire where from Kegworth we travelled into Leicestershire through Melton Mowbray and out towards Spalding.  After we had collected our friend we travelled into the village of Gedney, where we had lunch at the Chestnuts farm shop and then out towards the Wash, through Long Sutton and over the bridge at Sutton Bridge. 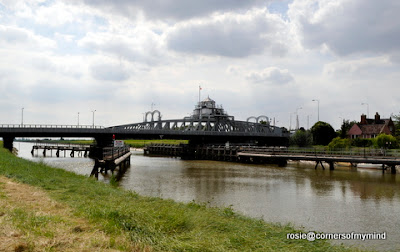 We turned left and followed the narrow road down the east side of the River Nene until we came to the place we were aiming for, we came to the lighthouse! 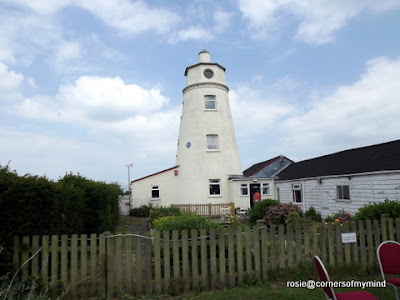 Not just any lighthouse for this one is special as it was the home of the famous artist and naturalist Sir Peter Scott. 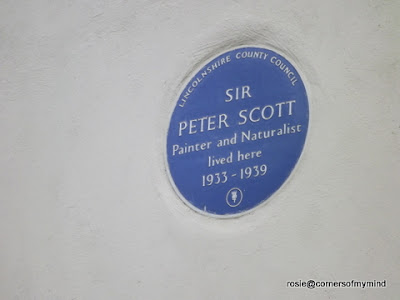 The lighthouse is now owned by Doug and Sue Hilton of the Snowgoose Wildlife Trust.  They  bought the property about two years ago and open it up to visitors at weekends in August.  This is the second year of the openings and this time visitors are allowed to go up to the lantern room at the top. 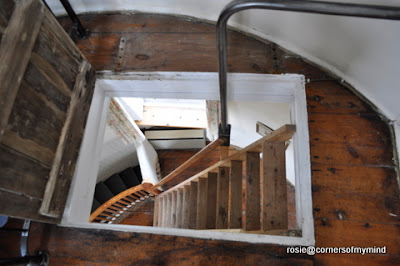 At this point I'll admit that the photos above and below aren't mine as I didn't dare scale the narrow ladders to get up there. 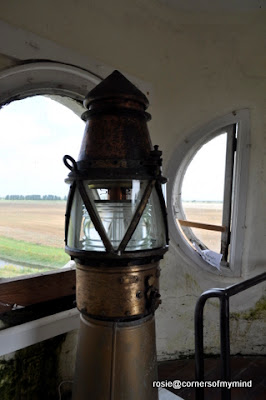 The view from the top was amazing as you can see from the photo below which shows the first stretch of the Sir Peter Scott Walk and which I'll mention again later. 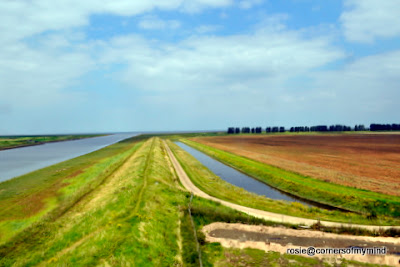 Paul ventured up to the top whilst I stayed downstairs with Marcia.  The owners came to talk to her as they were fascinated to hear her memories of the area and the fact that her elder brother had, many years ago, done some work at the lighthouse during Sir Peter Scott's time there.  We had e-mailed in advance of our visit as our friend is now 87 and quite frail and needs help walking.  We were allowed to drive right up to the building and we were welcomed in such a friendly, attentive way. 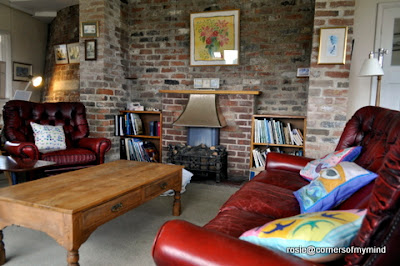 Later on whilst we were inside the lighthouse we were privileged to be invited to go through the barrier into the studio with its huge windows overlooking the river on one side and the pools on the other where many geese and other wildfowl were gathered.  This is where Peter Scott used to work.   The downstairs rooms consisted of studio, a dining room, small private kitchen and a bedroom.  On the next floor is the original living room before the studio was built.  Up above that was the original bedroom and right at the top is the lantern room. 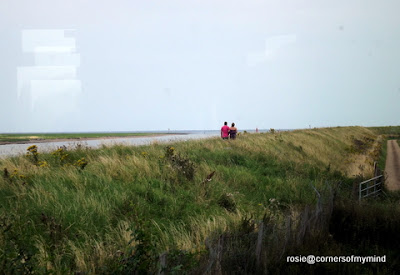 I took the photo above from the studio window.  It shows two people on the Sir Peter Scott Walk which starts at the car park near the lighthouse and goes along the sea banks all the way to the River Great Ouse ferry which you can use to cross the river to the town of Kings Lynn.  There is, we were told, by one of the other visitors to the lighthouse, a halfway point at Ongar Hill but you have to be wary of the tides.  Here is a - link - to the walk details. 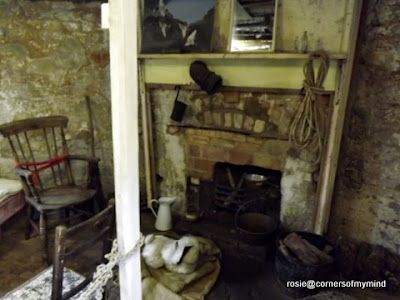 Down in the basement is where 'Samphire Charlie' lived with his little dog.  He was there when Peter Scott first came to the lighthouse in 1933 and he made his living gathering the samphire which grows on the shores of the wash from June to September.  Later the basement was used by Mackenzie Thorpe, a notorious wildfowler, whose paintings can be seen on the mantle piece in the photo above.  Whilst we were visiting at least two lots of people had come to talk to the owners about their memories of the rogue 'Kenzie' also known as the 'wild goose man.' 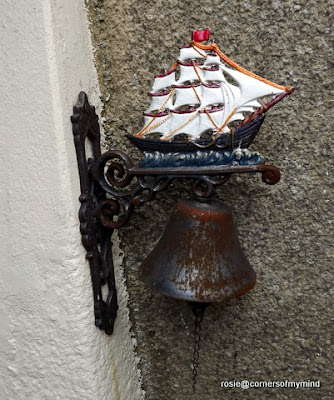 Above is the bell on the outside of the basement door.  Was it used to summon 'Samphire Charlie' or Kenzie Thorpe, I wonder?  On the opposite west bank of the Nene is an almost, but not quite, mirror image of the east bank lighthouse.  This one is in private hands. 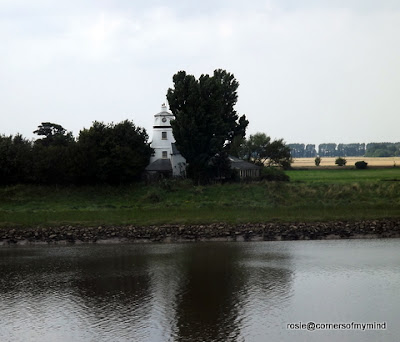 The owners and the Trust are gradually restoring the lighthouse and the area around it and hope to build a visitor centre and museum nearby.  Here is a - link - to an article from the local newspaper which explains all about their mission.  They want to interpret the area and the life and work of  wildfowler turned conservationist Sir Peter Scott which will also include sections on the people of influence in his life including his famous father, Robert Falcon Scott the antarctic explorer and his mother the sculptor Kathleen Bruce  .  His friend Paul Gallico who wrote the novel 'The Snow Goose'  his first wife novelist Elizabeth Jane Howard and his second wife Phillipa Talbot-Ponsonby and, of course, Kenzie the  'Wild Goose Man'. 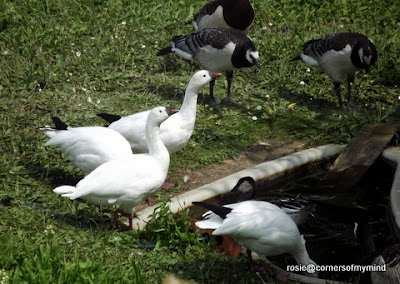 We had a lovely afternoon at the lighthouse, the weather was, again, perfect and the smile that lit up our friend's face made the long journey there and back worthwhile.
Posted by Rosie at 9:49 am