Blowing the Cobwebs Away

After visiting Ashbourne on Wednesday (see my last post) we spent Thursday at home with friends who had come over from Nottingham to visit.  We had a lovely day chatting, eating, catching up on news and exchanging presents.  On Friday we drove out to Bridgemere Garden World as I had some vouchers that needed to be used before the end of the month and a broken bird feeder tray to replace - I think the winter- plump squirrels must have been too heavy for it!   Saturday we had a stroll around the lake at Trentham and Sunday was spent mostly indoors as the weather was awful but not, I have to say, as bad as it is this morning when knocking at the front door woke us at 6a.m. - nothing to do with visitors but the Christmas spray on the door, which was fastened to the door knocker, being tossed around in the wind. 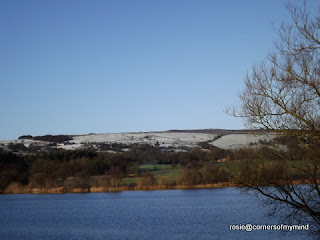 In complete contrast to today, the weather yesterday morning was cold and sunny.   We set out to take a walk at Tittesworth Reservoir just beyond Leek. 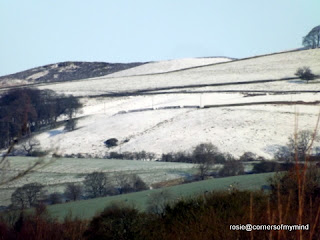 The snow on the hills looked just like an over-generous dusting of icing sugar on top of a cake.  This just made me smile as I made a lemon sponge on Wednesday evening, ready for Thursday's visitors and I dusted over a little too much icing sugar but I didn't, unlike Kirsty Allsop on Kirsty's Homemade Christmas, blow the excess off as she did from her chocolate log just before the judges had to taste it!! In the distance the rocky outcrop of The Roaches glistened in the low, bright winter sun. 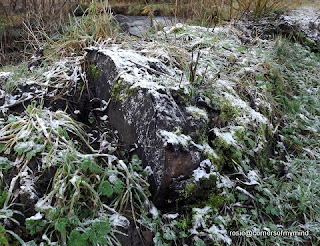 It was firm and crisp underfoot 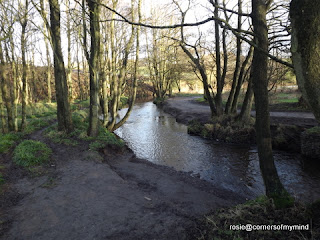 and it was cold enough to wear the hat again! 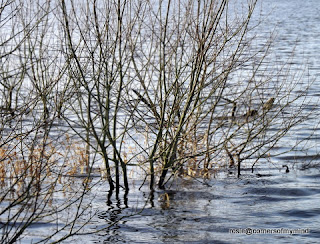 I thought that the water levels at Tittesworth were much higher than those we'd seen at Carsington last week. 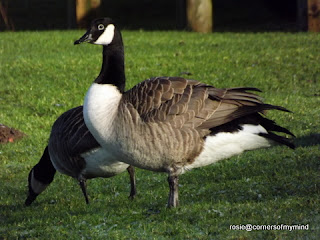 As we were heading towards the car park there was a great cacophony of sound as dozens of geese flew over with a honking, swirling, flourish some landing on the water and some on its grassy bank.   This one was watching us closely to see if we might have anything to offer in the way of sustenance.  Sorry goosey!
Hope everyone had a super New Year's weekend.
Posted by Rosie at 11:16 am