We've been busy in the garden clearing things away.  Lots of the plants growing in pots have now found a place in the garden or been disposed of.   The hanging baskets have been emptied and put away until next year.  Many of the pots were full of grass or weeds and the original plants had disappeared.  Some things have done really well this year others have struggled.   One of the lavenders I bought earlier in the year is really struggling the other is doing well.   The Echinacias didn't flower properly each flower having only a few petals on one side and some never turning pink.  I've no idea what caused that! 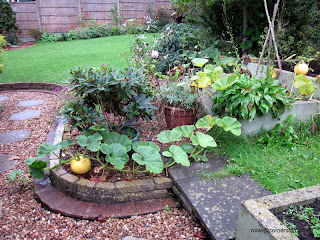 The table, chairs and parasol are packed away in the shed along with the gazebo which came down a few weeks ago.  I had  a stroll around the garden this morning and took a few photos of the plants that are doing well.   We do have pumpkins!  Not as many as last year though.  The plants have spread their tendrils quite a distance and I found pumpkins nestling in quite a few hidden places. 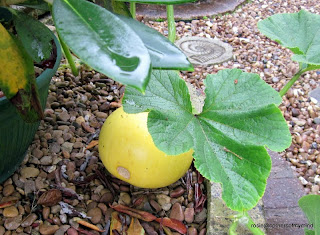 This one is resting on the pea gravel in front of the raised bed they are growing in. 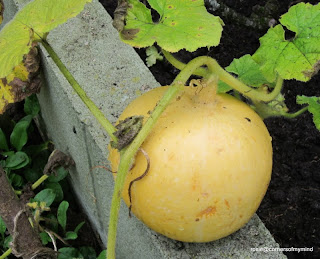 and this one is resting on the wall of the raised bed! 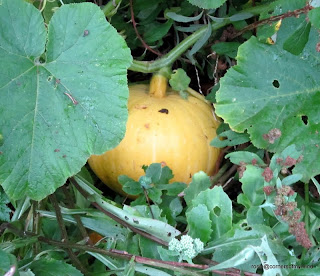 The one above is hiding amongst the daisies on the other side of the raised bed. 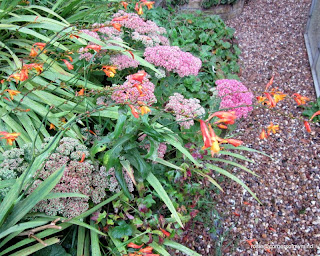 Also lingering in the garden are the Sedum and Crocosmia - still attracting the occasional butterfly! 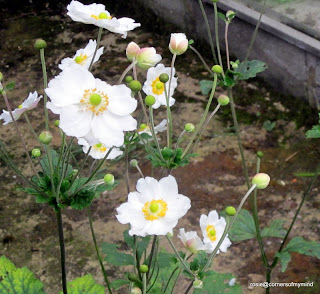 The Japanese Anemones are still flowering like mad too; we have pink ones but the whites are my favourites.
Outside the wind is getting stronger, the flowers are dancing on their stems, the trees are swaying and the leaves are blowing across the grass.  Although the air is quite warm it really feels as if Autumn  is on the way!
Posted by Rosie at 2:35 pm