We finally joined in with the winter weather when we woke up to snow yesterday.  I'd lain awake for awhile during the early hours of the morning as I was woken by the foxes barking and calling to one another across the gardens and in the school field beyond.  Other than that it did seem very quiet - that silence you get after snowfall.  Sure enough, when we drew back the curtains this is what we saw. 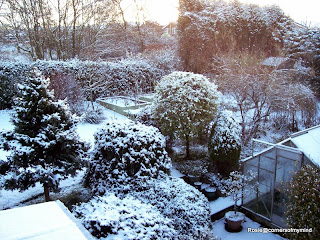 It wasn't a day to stay indoors though as we had to travel over to Nottingham to collect our friends and drive to Loughborough in time to board the train where we were to have a special lunch for a special birthday for one of them. 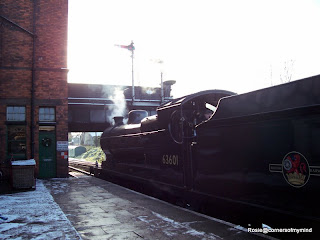 This was our train waiting at the station at the Great Central Railway.  We could see the dining tables were all set and waiting for us. 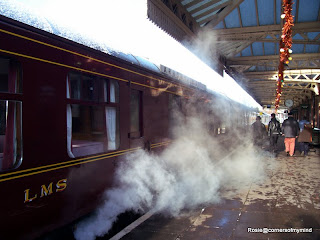 There was time to have a wander around the station, experience the open fire in the ladies waiting room and sip hot chocolate in the refreshment room. 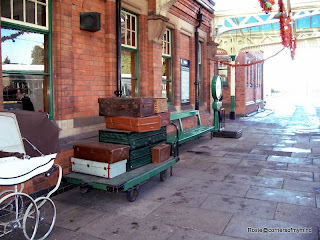 The whole station was very festive with decorations and Christmas songs playing quietly in the background. 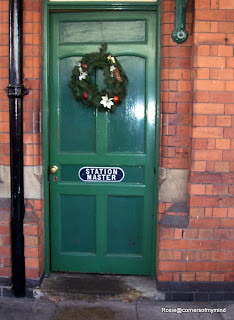 On the other platform the first Santa Special of the season had just pulled in and was disgorging loads of children with their mums and dads - all of them clutching toys.  Santa then set off for a little rest before his next train journey. 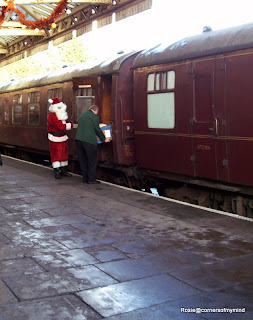 The railway, which originally ran from Manchester as far as Marylebone station in London,  has a double track one in the 'Up' direction which would have been towards London and one in the 'Down' return direction. 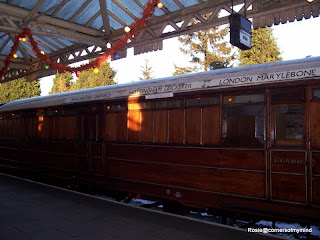 I find this odd as I always think of  'going down to London' or 'going up to Manchester' from the Midlands!  What do you say? 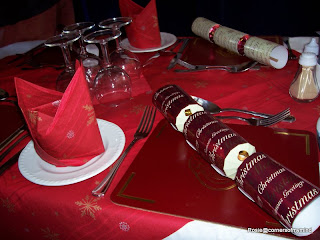 We boarded the train at 12.45p.m. and it eventually moved out of the station at just after 1p.m.  We were served drinks first and then the meal commenced.  We had spicy parsnip soup, followed by a full turkey dinner (Paul and I had the veggie option), then Christmas pudding, mince pies and coffee. 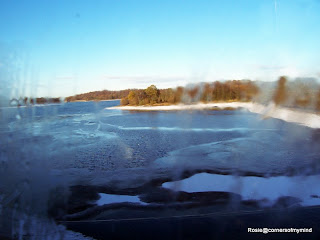 As you can see it was very cold outside and warm within the carriage so the condensation on the windows stopped us from seeing much of the countryside.  I did manage to take this photo of Swithland Reservoir as we stopped on the bridge whilst the main courses were being served.  We passed slowly through the stations at Rothley and Quorn but I think we have decided that a return visit is needed in the summer so we can see all that we missed yesterday.

I'm going to be away from my computer for a week as I'm off to stay with my sister in Chesterfield to help her after her operation.  I'll catch up with you all when I return home.
Posted by Rosie at 11:39 am