Well it's just like me to decide to write a 'watery' post on a day that rain is teeming down outside.  I struggled against the gusting wind and driving rain to get the wheelie bins out this morning.  Our blue bins are for plastics and they are so lightweight that most people's down the street are blowing all over the road.  I've managed to wedge ours with the paper bin the contents of which are more like papier mache now as the lid blew off overnight.
The garden looks rather forlorn - our two carved pumpkins still sit near the birdbath and the soggy lawn is covered with leaves, several rocket sticks from the weekend's fireworks and the remains of a Chinese lantern.  I watched several wafting in the air and travelling quite quickly towards us on Saturday night - one of them must have landed in the garden. 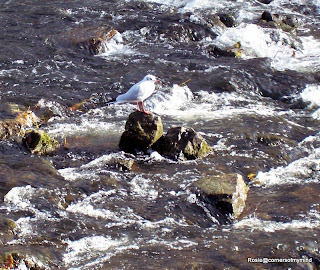 I took this first picture the weekend before last.  We drove out to Bakewell on the Saturday and the ducks, geese and gulls were as usual on the river crowded around the pedestrian bridges which go over to the car parks and cattle market.  It was very busy as there was a farmer's market too. 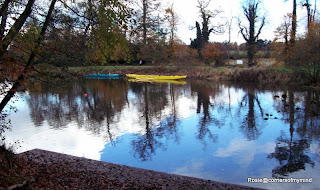 Yesterday we went for a walk around the lake at Trentham; in fact we walked around it twice!  We walked round one way, stopped for coffee and toasted tea-cakes and then walked back round the opposite way.  I took a few photos of the reflections on the lake. 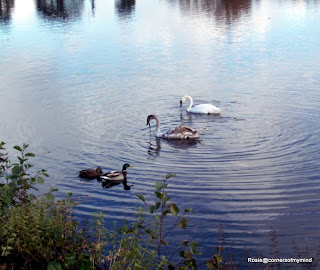 The ducks were watching the swans dipping their heads into the water - and popping up with their beaks  covered in weed. 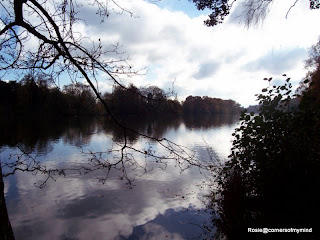 The reflection of the clouds looks like a smoky mist on the water. 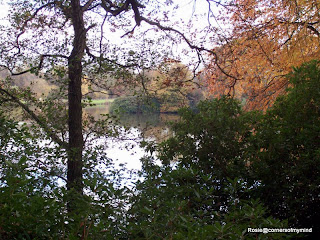 Peering through the branches 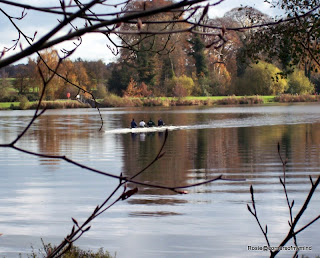 What a difference a day makes!  I'm so glad we managed to get out into the fresh air and sunshine for a long walk as it looks as if the rest of the week is going to be very wet and windy.
Posted by Rosie at 9:41 am