I've borrowed this tag from Rowan's blog Circle of the Year as it seemed like an interesting one to do, so here goes:-

What is your current obsession?

I don’t have obsessions as such but I can get involved to the exclusion of everything else when I’m on the trail of an ancestor. 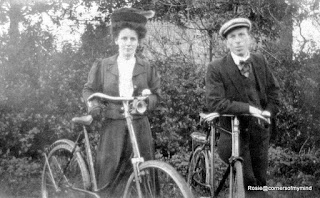 What is your weirdest obsession?

How can you define weird? The word has altered meaning in the last few years, now, to some people, things that seem ordinary, acceptable or just different to me are labelled 'weird'. So perhaps some people would find delving into the past (as above) weird to others it might mean following ‘Dr Who’, keeping snakes or bog snorkling - so I can’t really answer this.

What are you wearing today?

What would you eat for your last meal?

If I knew it was my last meal I probably wouldn’t be able to eat it!

What’s the last thing you bought?

A pretty little bag from a museum craft stall for £1 - I've carried it nearly every day since I bought it! 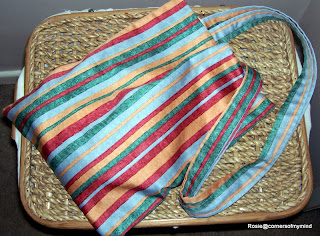 What are you listening to right now?.
Nothing much everything is silent except for the occasional sound of birdsong through the open window - I heard a cat sneeze earlier!

If you could have a house totally paid for, fully furnished anywhere in the world, where would you like it to be? 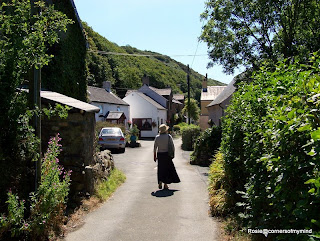 If you could go anywhere in the world for the next hour, where would you go?

There are so many places I long to see and many I long to return to but for just an hour I’d like to be walking along a beach somewhere, anywhere! 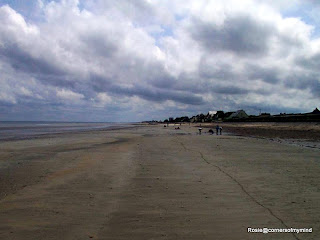 Where is your favourite holiday destination?

Which language do you want to learn?

It would be nice to be able to read a bit of Latin to transcribe old documents more easily. We did Latin at school for the first two years I was there then it was dropped in favour of Spanish or German - French was compulsory at that time. All I can remember is 'amo, amas, amat, amamus, amatis, amant' and the school motto 'Ab honesto virum bonum nihil deterret' - which means something like 'nothing deters an honest man from doing what is right'.

What’s your favourite quote (for now)?

‘By shallow rivers to whose falls melodious birds sing madrigals’

I read this earlier this year on a tin glazed earthenware pot by Lawrence McGowan at the in Hanley – I liked it so much I wrote it down so I wouldn’t forget it.

What is your favourite colour?

What is your favourite piece of clothing in your own wardrobe?

What is your dream job?.

I’d love to own a bookshop with a small coffee shop attached.

Describe your personal style?
Hmm – hard one – I do like everything to match but not be too formal for example a classic jacket with jeans and boots or a long wool coat with boots - in the summer I live in longish skirts, t shirts and sandals.

What’s your favourite tree?
Horse Chestnut because they look so gorgeous in Spring and early Summer with their spectacular huge flowers and in Autumn they give us shiny brown conkers.

What are you going to do after this?

Start to prepare the dinner – see above

plums - straight off the tree

Loads but these ones are always on my list - The Enchanted April by Elizabeth von Arnim , A Month in the Country by J L Carr, Mrs Dalloway by Virginnia Woolf, North & South by Elizabeth Gaskell

What are you currently reading?
Grey Souls by Philippe Claudel - a murder mystery with a twist - set in France during WW1 and The Wonderful Weekend Book by Elspeth Thompson - I've gleaned some wonderful ideas from this book including the recipe for tonights meal (see above). I’ve just finished Stratton’s War by Laura Wilson a murder mystery set in London during the second world war. Next on my TBR pile is 'The Unbearable Lightness of Scones' by Alexander McCall Smith. 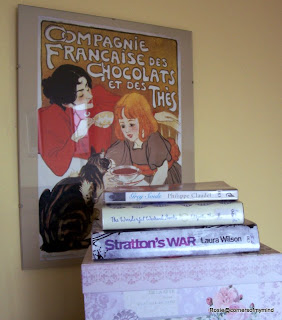 Go to your bookshelf, take down the first book with a red spine you see, turn to page 26 and type out the first line:

‘Swish, Swish, Swish went her long skirt over the grass verges, but every time they crossed the road she would relinquish Laura’s hand to gather it up from the dust , thus revealing to the child’s delighted gaze a frilly purple petticoat.’

From The Illustrated Lark Rise to Candleford by Flora Thompson 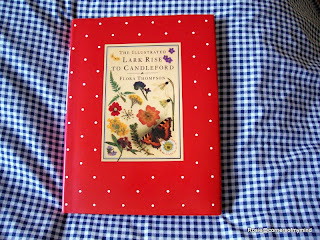 What delighted you the most today?

The booking of a holiday in the New Forest later this year we are going with my sister and brother-in-law.

What is your earliest childhood memory?

Sitting in my cot, looking through the bars at my mother running towards me along the landing, the light over the stairs behind her head. This was in our house in – my first home – demolished years ago to build the hospital car park.

'What is your all time favourite film?

To echo my choice of books – Enchanted April and A Month in the Country but also Amelie – I just love it. 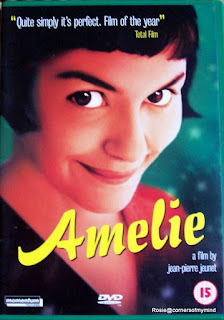 I’m adding – what are you going to do tomorrow?
We are going into town to the building society to pay off our mortgage. We've tried for nearly two years to sell our house and downsize to get rid of it but couldn’t in this financial climate. We’ve really struggled over the last couple of years to pay the bills since Paul gave up his teaching job but now his lump sum from his teacher’s pension has come through, that, plus most of our remaining savings will pay it off – we’ll be broke but more secure – I hope!

I'm supposed to tag eight others but like Rowan am going to leave it up to you if you want to do it, if so feel free to take it with you.