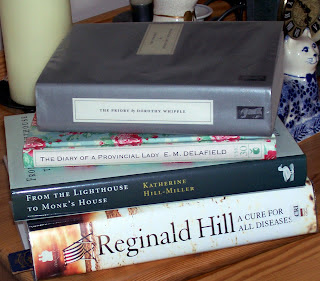 As it is July I'll do another review of books read as I did in April for the first three months of the year. I was going to do a list of them all but I think I'll mention just a few of my favourites.

The Diary of a Provincial Lady by E M Delafield I read very quickly, was very entertained and laughed a lot. I intend now to find the other diaries and read those too.

The Priory by Dorothy Whipple. I was intrigued by this as Mrs Whipple lived in Nottingham and based her descriptions of the Priory on one of her favourite places - Newstead Abbey, home of the poet Lord Byron. I liked her style of writing and her characters were wonderful, I liked them, then I didn't and then I did again. The book was published in 1939 and covers the two years before the outbreak of the second world war. I shall certainly read more of her books if I can find them.

From the Lighthouse to Monk's House by Katherine Hill-Miller is about the sense of place within the works of Virginia Woolf. The author takes us to the places that influenced Virginia Woolf throughout her life and also gives a guide to visiting the places to look for yourself. Since we moved to Stoke-on-Trent a few years ago I've been trying to gradually read some of the books of the city's most noted writer Arnold Bennett. So far I've managed The Man from the North, Anna of the Five Towns and Old Wives Tales. My latest acquisition, courtesy of the Oxfam shop, is a collection of his short stories The Grim Smile of the Five Towns. I've read three of the stories so far and keep dipping into it between other books.

A Cure for All Diseases by Reginald Hill and Beneath the Bleeding by Val McDermid. Two of my favourite crime writers. A Cure for All Diseases carries on from The Death of Dalziel and certainly made me chuckle. Beneath the Bleeding is the latest in the Tony Hill and Carol Jordan series and as good as any I have read and kept me turning the pages. I love the relationship Tony and Carol have.

For light entertainment I've discovered Adele Geras this last year and have read two more of her books A Hidden Life and Hester's Story and enjoyed them both. I also read, very quickly, the book written by the now famous blogger, Petite Anglaise aka Catherine Sanderson.