There is nothing nicer when the weather is warm than to get out early in the morning and to walk beside a  local waterway.  We've done this twice over the last few days. Having spent Sunday, Monday and Tuesday at home because of the heat it was good to get out and about again. 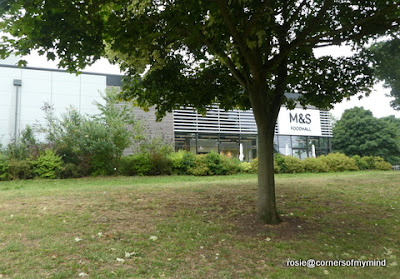 On Wednesday we went to the nearby town of Stone and after shopping and a quick coffee at the canal side M&S Food we took a short walk along the towpath. 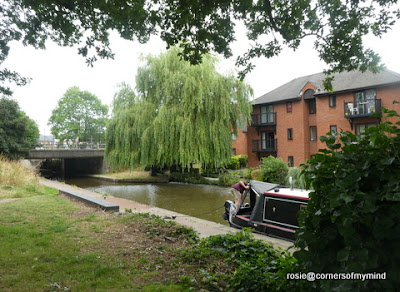 The Trent and Mersey Canal passes through the town. 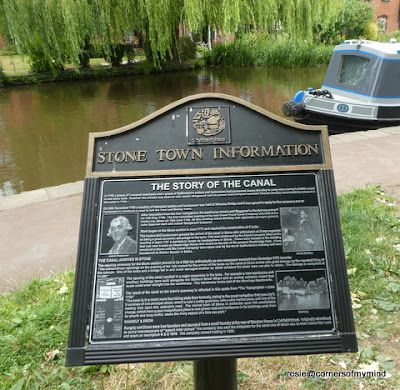 It starts at Shardlow in Derbyshire and ends at Preston Brook in Cheshire passing through Staffordshire on its way.  It joins with the River Mersey via the Bridgewater canal. 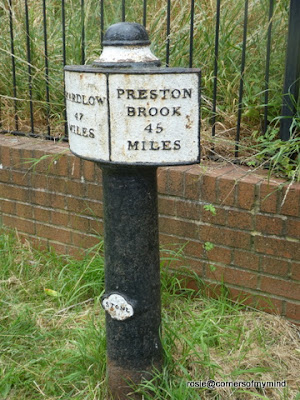 Built originally to link the Rivers Trent and Mersey it reaches  the River Trent at Derwent Mouth just six miles from Shardlow. 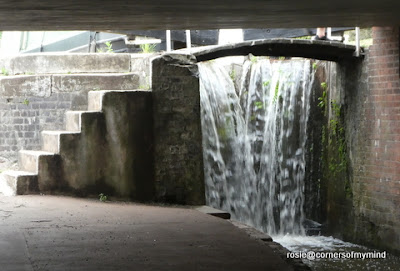 The locks were busy with vessels waiting their turn on either side.  People were heading to the shops to buy supplies whilst waiting, others walking their dogs along the towpath.  Most boats seemed to have a dog on board either sitting patiently or walking backwards and forwards along the top of the boats. 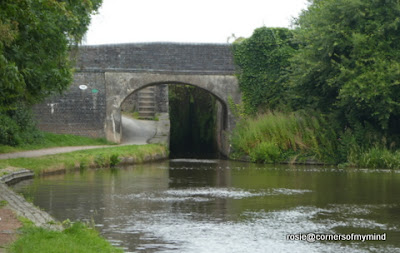 We walked along the towpath and past a couple of locks. 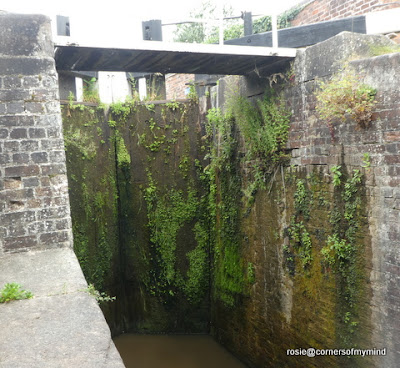 I loved all the vegetation growing in and around these lock gates. 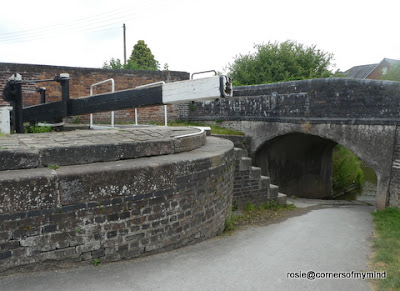 The same lock from the other side. 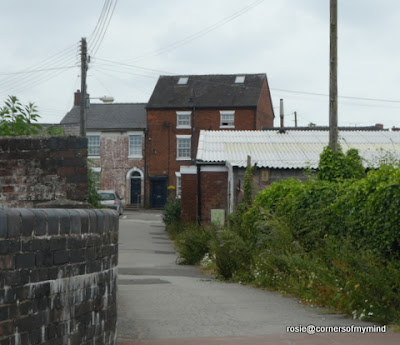 The footbridge over the canal which takes you into the town centre. 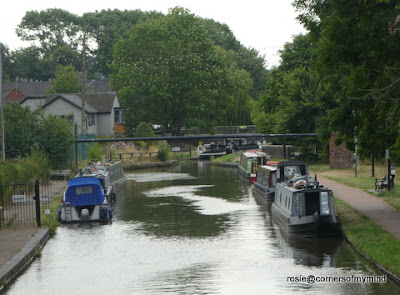 The view from the footbridge.  We returned to our car which was parked in the M&S car park this way.  It was a fairly short but interesting and lively walk. 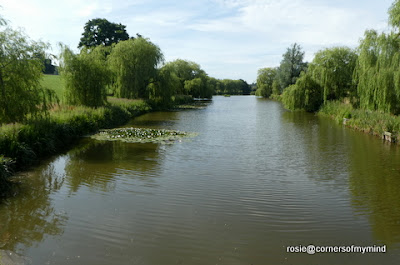 Yesterday we visited the local farm shop to buy birdfood.  It is being consumed quite rapidly at the moment, mostly into the tummies of squirrels rather than birds. I was pleased to see this week that the long tailed tits had returned to the garden to feed on the fat balls.  We also had a very hungry badger in the garden on Wednesday,  I suspect it couldn't get worms from the soil in the very hot weather. 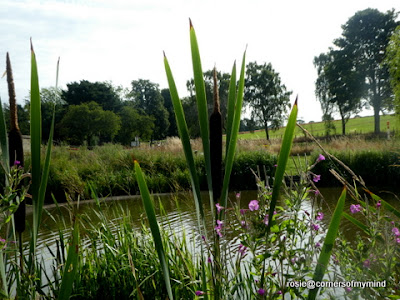 We moved on from there just a couple of miles to walk along the riverside on the Wedgwood Estate at Barlaston. 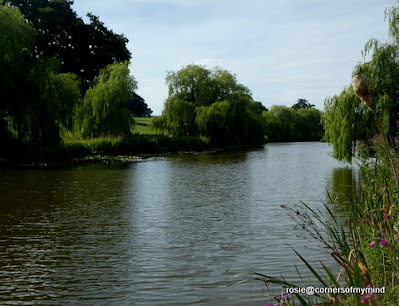 This walk was completely opposite to the first one as it was peaceful and quiet with hardly a soul in sight.  A place of tranquility rather than a hive of activity. 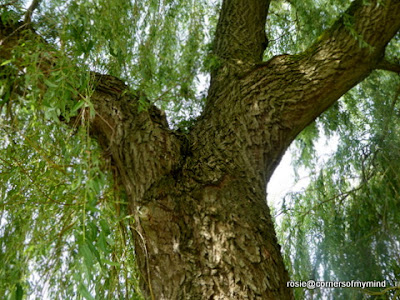 The River Trent meanders its way through the area.  It starts as a small trickle from its source just north of the Potteries on Biddulph Moor.  It is quite small as it passes through Stoke-on-Trent. 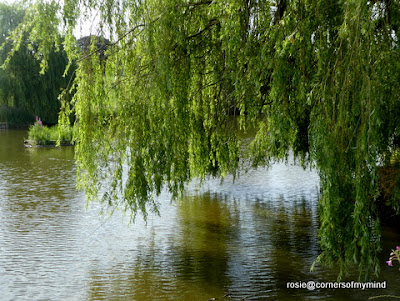 As it grows wider it passes through Burton-on-Trent, Nottingham, Newark-on-Trent and then up to Gainsborough. From here it joins the River Ouse and the River Humber estuary and thence into the North Sea. 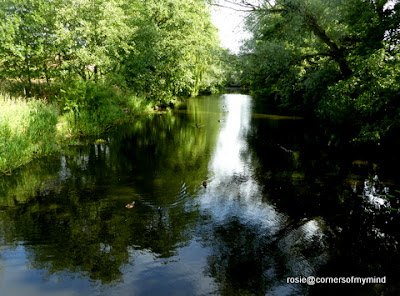 Imagine all those boats and all that industry over the centuries, but here the river is tranquil although not far from the Wedgwood factory and close to the Trent and Mersey Canal as well as the main railway line between Manchester and London. 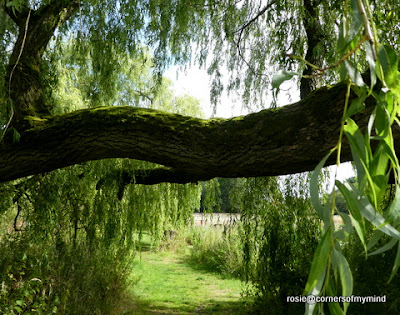 The walk was delightful under the over hanging branches of the willow trees.  Butterflies and bees hovered above Rosebay willow herb flowers and other vegetation.  I hoped that we may see dragonflies by the river as well but they were absent this time. 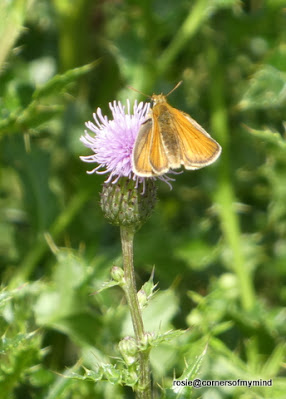 This little Skipper was the only insect that would stay still long enough for me to take a photograph.

Two lovely walks in places of leisure that would formerly have been areas of hard work and industry.