Foxes are back but it's a new pair.

They appeared on our wildlife camera last night.  Just look at the rain!
These two seem to have taken over from the two older foxes.  It has happened before when familiar foxes move on and new ones take their place.  They don't have a long life span especially in urban areas, perhaps two or three years.

In other news the gas people are stopping at the house next door and the rest of the road have to wait until after New Year. Still no post, not even junk mail.  The parcel of fruit teas cannot be tracked and the parcel from a friend, sent on 26th November, still hasn't arrived.  We posted all our cards on Monday morning so lets hope they get there in time.

Last year we couldn't be bothered to struggle to get the Christmas tree out of the roof space since then it has been cleared out and the tree left where it could be easily retrieved.  Today it was brought down from the roof space so that we can decorate it a few days before Christmas. 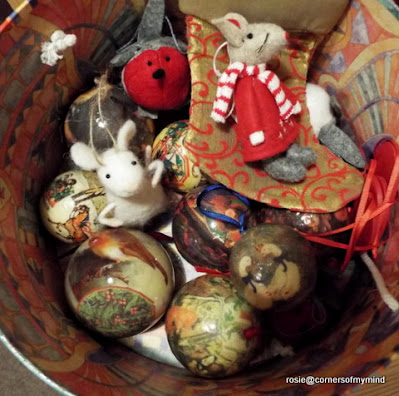 I've found one of the boxes of decorations for the tree.  Now where is the other one?

There was a letter in our newspaper this morning which ask the question 'Do I have the oldest artificial Christmas tree'  the writer's tree was thirty years old. I have an older one. 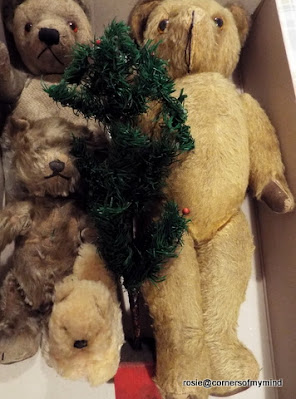 Tucked away in a cardboard box alongside my childhood teddy bears is a very small tree bought for my first Christmas in December 1950, I would have been almost four months old.