Things were a bit slow last week as the snowy weather stopped us from going too far. The road we live on was very icy for most of the week, the wheelie bin collectors who normally come on Tuesday finally emptied our bins on Friday afternoon. We cancelled driving over to Mansfield a couple of times but finally got there on Thursday to visit family.  Avoiding the A50/A38 route because there had been several accidents reported on those roads recently we drove through country roads via Ashbourne, Matlock and Clay Cross to Scarcliffe, the small village I grew up in, to put a festive wreath on my Mum and step dad's grave in the churchyard. 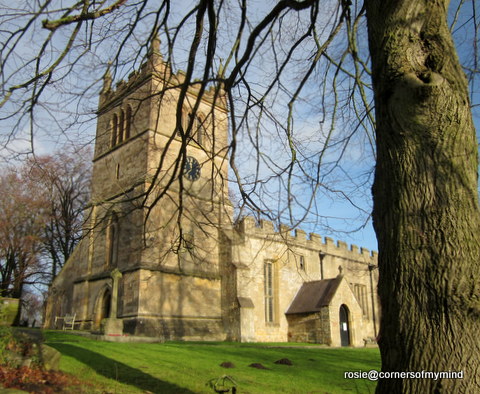 The church of St Leonard dates from the early twelfth century.  The school I attended as a child isn't far from the church and was very involved with the church through the school year.  The Vicar used to come to the school to talk to us and occasional visits to the church were made.  Sunday School was held at the Vicarage.  I remember the vicar during my time at the junior school was The Reverend Jeremy Wootton and his housekeeper was an elderly lady (or so she seemed to me as a child) called Miss Heatherington. Funny the things you remember! Our teachers at school were Mrs Groves and Mrs Phipps, the school secretary was Mrs Russen and the cook was Mrs Coupe.  With only thirty five pupils the village school was like a large family. 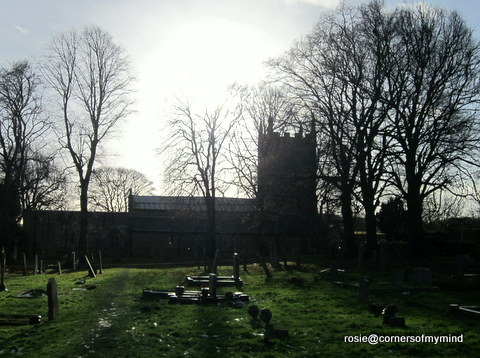 One story we learnt at school was the tale of Lady Constantia de Frecheville who with her small child was lost in darkness in the nearby woods.  She was guided to safety by the ringing of the curfew bell at the church.  She left land to the church which would pay for the curfew bell to be rung each night to help others who may be lost.  There is a monument to her in the church but of course the church was locked whilst we were there and we were short on time but I have found a link to a blog where the writer has recorded a visit to the church in 2016 whilst it was open for History Open Days and there are photos of the monument there.  Northern Vicar's Blog 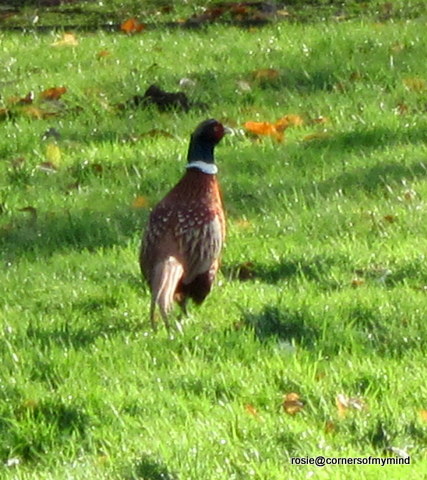 The churchyard was full of pheasants. Of course as soon as I came ambling around the corner they scattered to the four winds, especially the females.  Just a few male pheasants carried on pecking at the grass regardless of a striding female wearing padded winter coat and wellies, clutching a very prickly holly wreath.  I left Paul in the car to ring family to tell them we were running a bit late as we had managed to get behind every slow vehicle you could think of down the country lanes. When I rounded the corner he was standing on the grass in front of the church with phone held high, unable to get a decent enough signal to make a call. 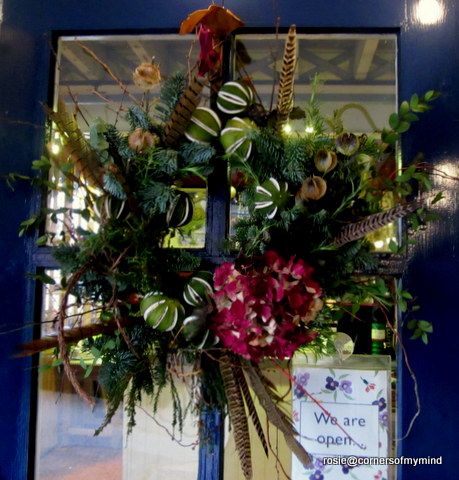 I'm sure those pheasants in the churchyard would not have been amused at the feathers to be found in the wreath on the door to the Emma Bridgewater factory shop and cafe.  It was very pretty though.  Inside the seasonal decorations seemed to be made up of pheasant feathers and large, dried allium heads which must have been from the little walled garden at the back of the shop as I saw them there in the summer. 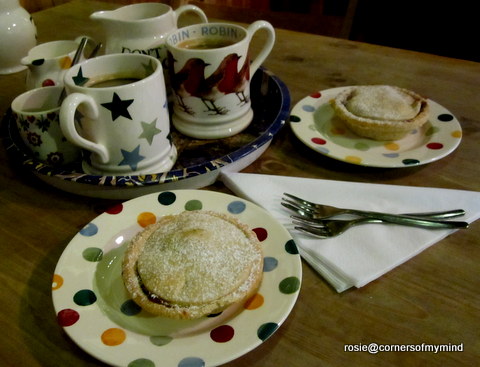 Of course we couldn't resist the cafe and it was about time that we had our first mince pie of the season.  Very tasty they were too.  I loved the Robin mug, so cheering and festive. 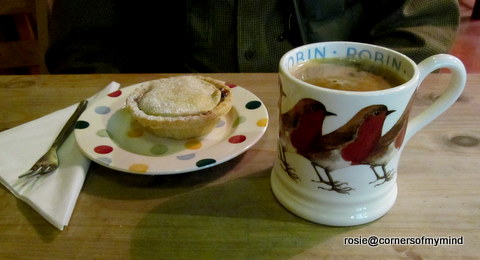 Meanwhile back home the foxes have been active lately, visiting the garden during the day time, especially when the snow was on the ground.  The fox below is one of this year's cubs, a little female, she has a lovely bushy tail with a black tip and black or very dark brown fur on her lower legs. 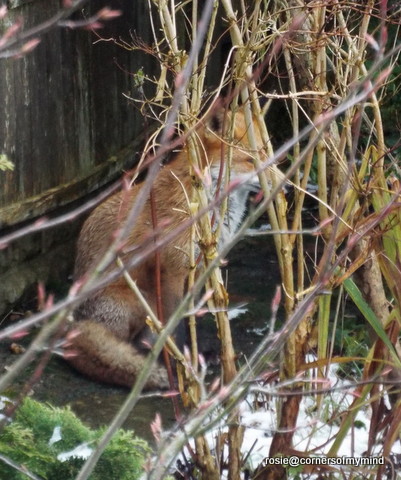 Last weekend we headed up to Little Moreton Hall to listen to Piva singing their Tudor Christmas songs.  We go every year and their performance always starts Christmas for me. 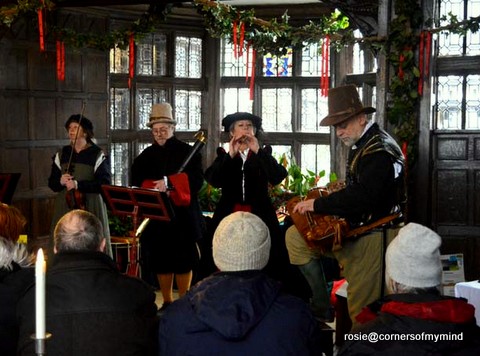 I'll be back with more about this visit later, meanwhile I wish you all a Peaceful and Joyous Christmas and a Happy and Healthy New Year.