Alerted by Caroline at Ragged Robin's Nature Notes blog that Waxwings had been seen to the north of the city we'd hoped to go and find them at Talke on Friday but we woke up to thick fog and icy paths and it wouldn't have been wise to go out on the roads.  I'd been following the link I'd been given to the staffs birders twitter page, even though I'm not on twitter I was able to read the postings.  On Sunday I read that there were Waxwings in Biddulph so the next morning we decided to go up to Biddulph Grange for a walk and hope that they  were still there.

I knew where the Biddulph Arms public house was and we scanned the road as we went towards Bidduph Grange but didn't see anything so we went into the gardens, had a good walk around and a scone and coffee in the cafe.  We came out and spotted Redwings on the berries just opposite the cafe. It was lovely to see them and I thought I would have to be content with seeing and photographing them. 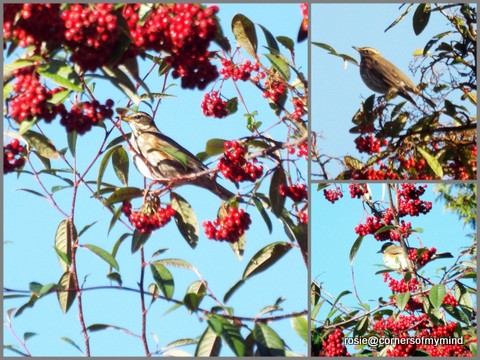 We left the garden to drive back towards the town and as we drove up the road saw a small group of people with cameras near some Rowan trees with orange berries.  We pulled up and went to join the little group and three waxwings flew in and onto the trees.  What joy! 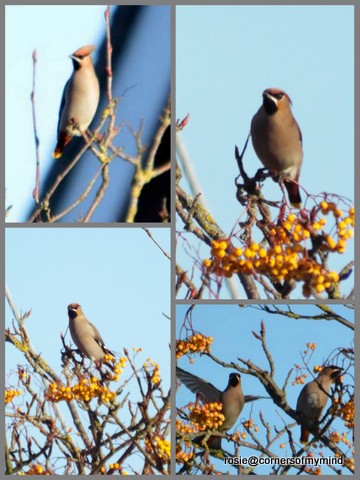 I'm afraid my little camera wasn't as powerful as some of the huge ones on tripods the other photographers had but I did manage a few photos and Paul took some too.  A couple of those above are his and the other two mine.   I was thrilled they were still feeding there as I've never seen them in the wild before.
Such gorgeous birds.
Posted by Rosie at 12:09 pm