On Wednesday we drove over to Chesterfield and collected my sister and her guide dog from her home and set out for Clumber Park which is only a few miles away. 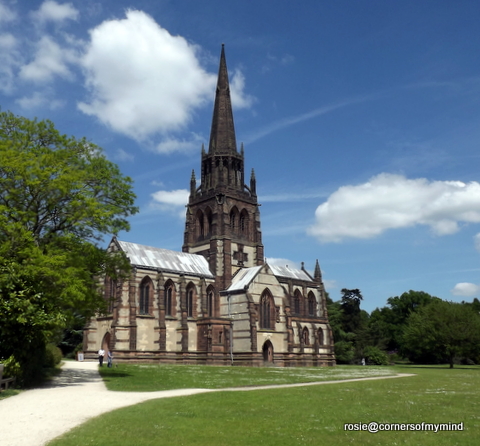 We all have happy memories of Clumber Park for it was a great part of our childhood.  Weekend visits with family we would walk, play games, have a picnic and watch the cricket.  Much has changed since then and there is so much more there now for visitors than when we were children. 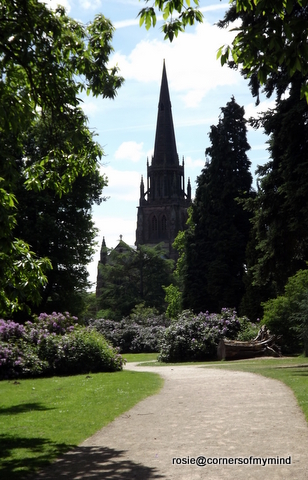 We bought sandwiches from the cafe and sat outside close to the lake,  then we walked through some of the grounds past the chapel,  the rhododendrons were still in flower. 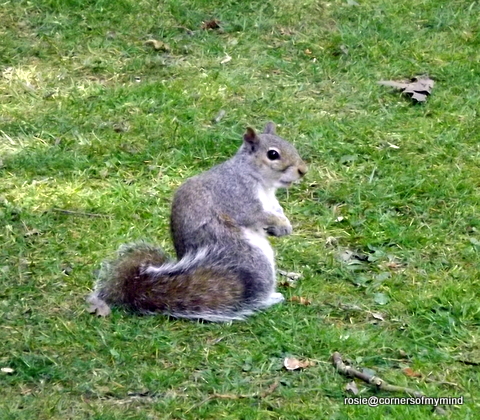 There were lots of these little chaps about 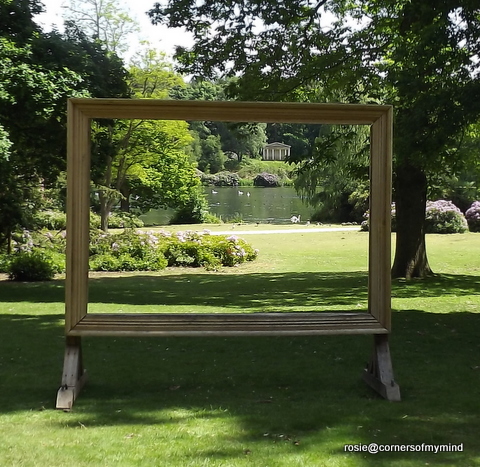 and some intriguing things to find.

What I really wanted see on this visit was an exhibition called Clumber Park's Lost Treasures - The Missing Mansion before it closed this weekend.

Below is the description of the exhibition from their website

A magnificent mansion, home to the Dukes of Newcastle, once stood at the heart of Clumber Park. From its original construction in the 1760s to its demolition in 1938, the house underwent several changes, either to accommodate fashions of the time or as a result of damage caused by the fires of 1879 and 1912. We have laid out the mansion's ground floor to give you an insight into this family home and discover how the rooms would have once looked through a series of beautiful 'ghostly' images.

The outline of the ground floor had been constructed on the grass exactly where the mansion stood.  Here are some of the photos I took whilst following the trail around through the different rooms. 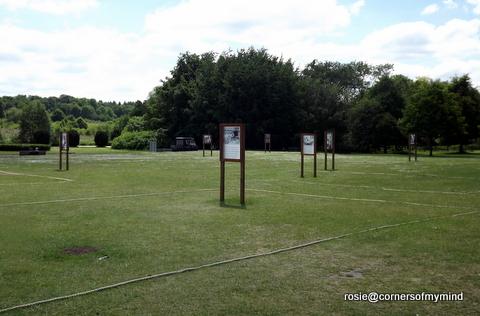 Apparently after a geophysical survey of the site of the former Clumber House staff searched old photos and guide books to find out what the rooms looked like. 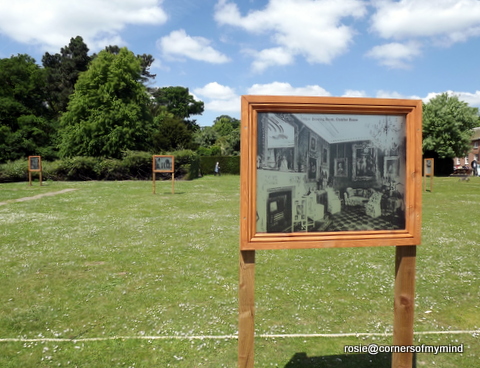 In the photo above - the Yellow Drawing Room
Clumber was first mentioned in the Domesday Book and in the middle ages was
a monastic settlement. It was enclosed in 1709 when it was owned by John Holles, the first Duke of Newcastle. Clumber House built at the side of the River Poulter in the centre of the park was a hunting lodge.  In 1759 work began on extending the house to make it a principal mansion for the family. The parkland is 3,800 acres of woodland, open heath and farmland. The serpentine lake covers 87 acres and the avenue of lime trees at 3 miles long is the longest in Europe. 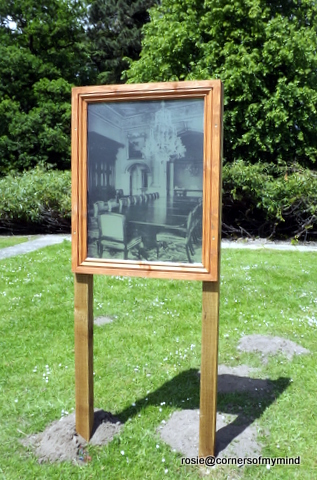 The house was rebuilt after a fire in 1879 and finally demolished in 1938.  The park was left to the people of  nearby Worksop by the late Duke of Newcastle but was bought by the National Trust in 1946. 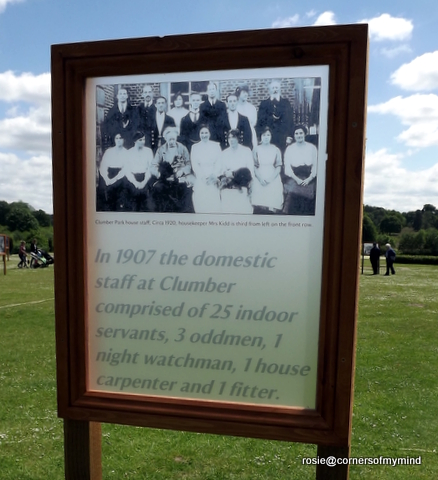 Apparently one of the Dukes of Newcastle was a keen photographer and left many photos of the interior of the house. 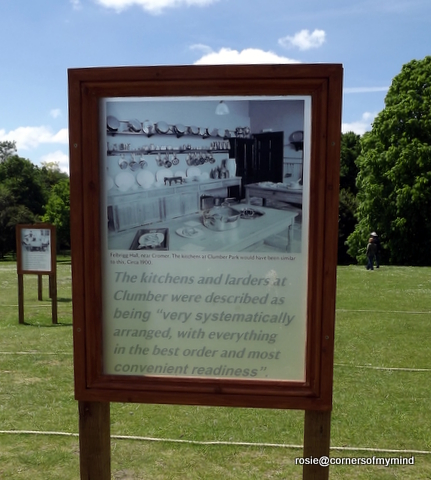 I love the description of the kitchens
"very systematically arranged, with everything in the best order and most convenient readiness " 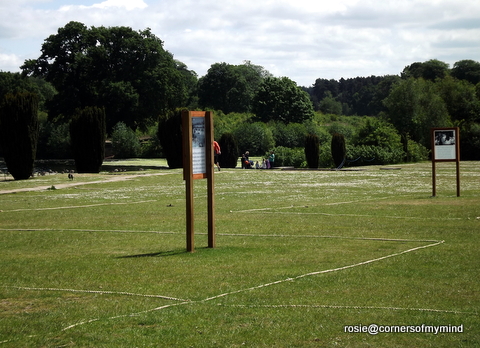 I hadn't realised until I saw the layout and the old photo of the mansion how close it was to the lake. 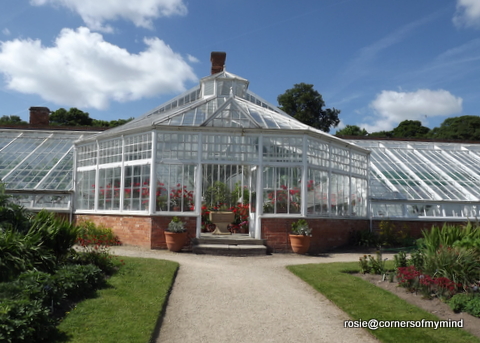 In the walled gardens are the huge glass houses 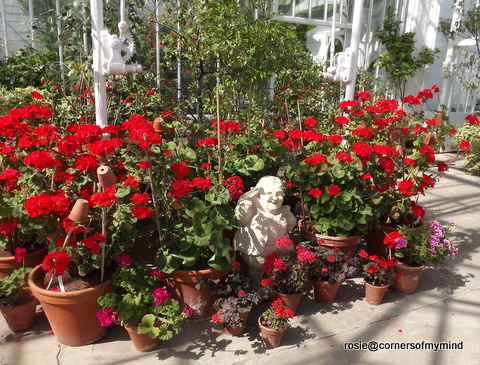 Everything inside was clean, bright and cheerful 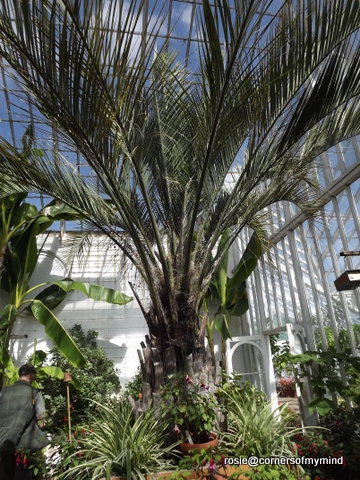 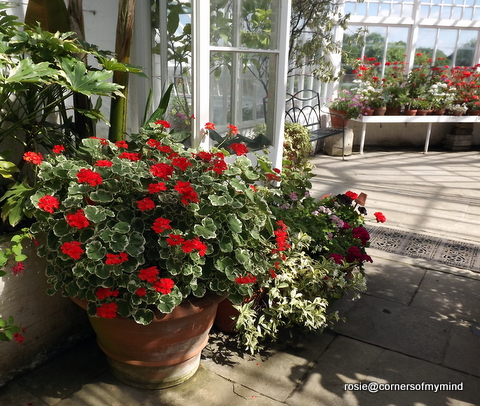 Just a note about the chapel in the first photo.  This was built between 1886 and 1889.  Dedicated to St Mary the Virgin it is known as the 'cathderal in miniature', its spire is 180 feet high and the length of building from west to east in 140 feet.  It is years since I've been in and we didn't go inside on this visit as we were running out of time.
Posted by Rosie at 7:06 pm