There was a slight drizzle interspered with heavier rain when we arrived in Rowsley.  We'd come to photograph the church for Paul's one-name study website - yes 'Family Historying' again.  This has lain in abbeyance over the warm summer months whilst there were other things to do but now more photos and research were needed. 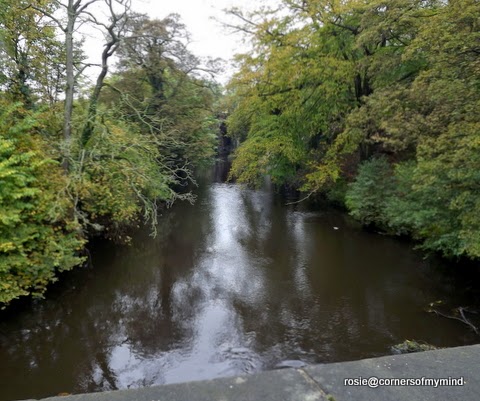 The village of Rowsley can be found in the White Peak area of Derbyshire and the busy main A6 road between Bakewell and Matlock cuts through the centre of the village.   It is also the village of two rivers the Derwent and the Wye which meet nearby where the Wye flows into the Derwent.  As you walk through the village you cross the bridge over the Derwent.  We parked in the shopping outlet car park and walked up to the main road past the Grouse and Claret pub which was closed, fenced off and undergoing refurbishment.  The huge 'book early for Christmas' signs would indicate that they expect to be open again by then. 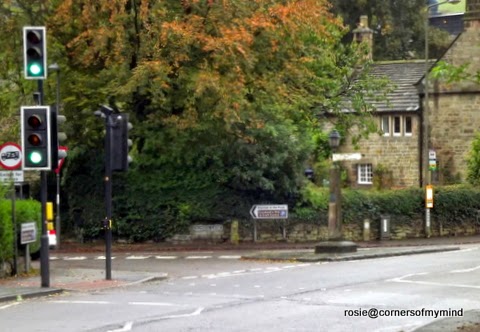 The village has a wonderful old hotel at its centre. The Peacock is owned by Lord Edward Manners owner of nearby Haddon Hall.  Being near both the Derwent and Wye rivers it is famous for its fly fishing where fishermen from all over come to catch rainbow and brown trout. 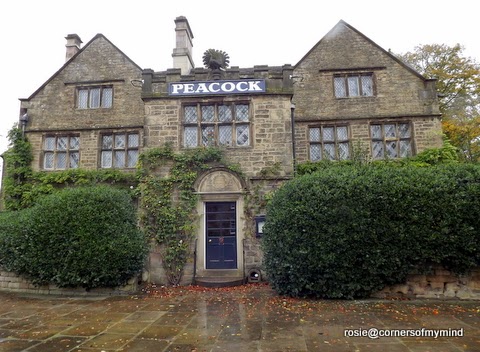 It is a 17th century house built in 1652 as a manor house by John Stevenson agent of Grace, Lady Manners. 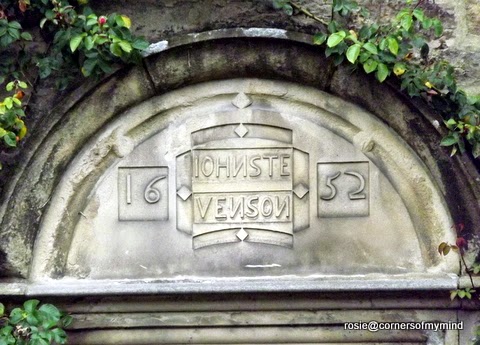 The Peacock also served as the Dower House for Haddon Hall. 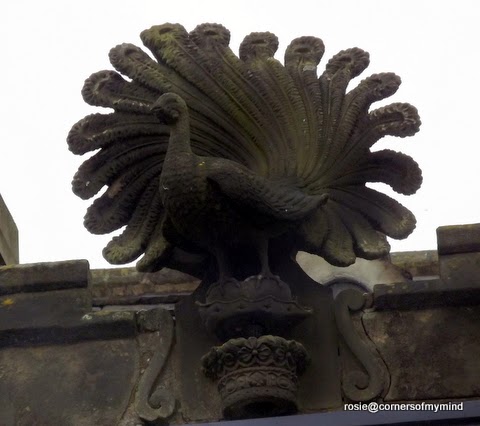 Above the main door is a ceramic Peacock, the emblem of the Manners family and made by Minton in Stoke on Trent.  You can see from the rain spatters on the photo below what a grey day it was. 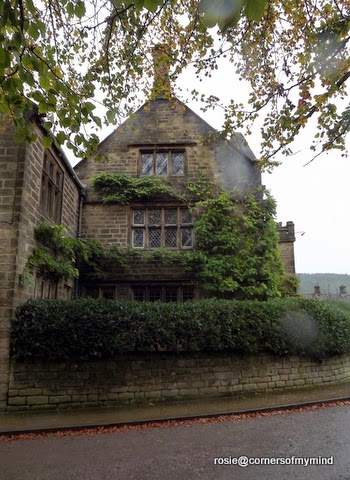 On the corner of Church Lane opposite the Peacock is the village well which bears the date of 1841.  This well is used for the famous Derbyshire Well Dressings with a display here in the summer. 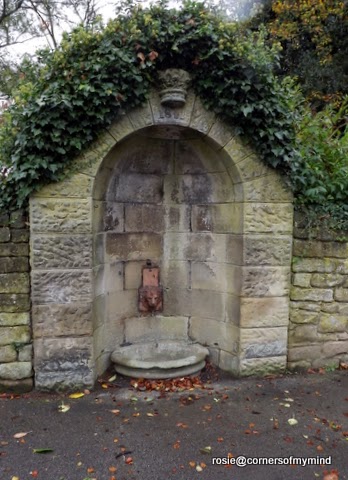 Further up church Lane is the village Post Office, some very pretty cottages, a couple of farms and the church. 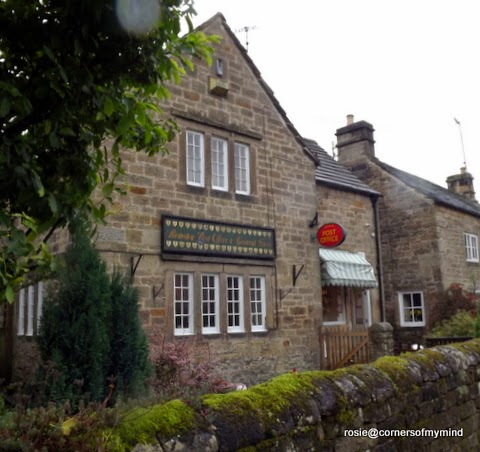 The village church of St Katherines was built in 1855 and before it was built villagers had to travel to either Bakewell or Beeley for their Sunday worship. 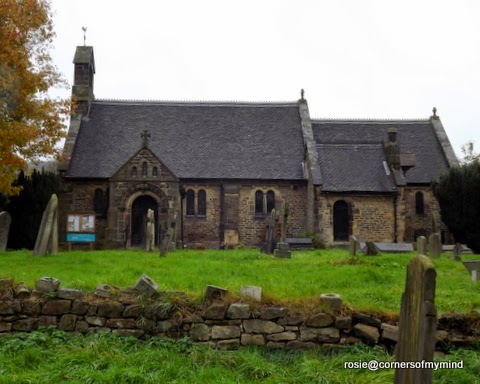 We didn't know if it would be open or not but the outer door was open and when we tried the inner door that was too. 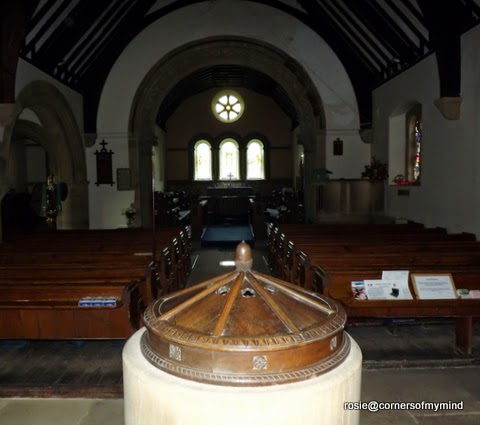 Inside it was warm and clean and tidy - obviously loved and well looked after. 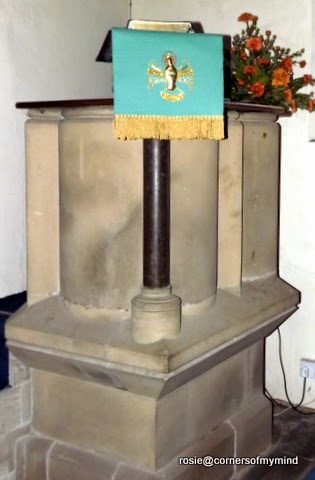 There were some interesting details in amongst the plain simplicity of the interior. 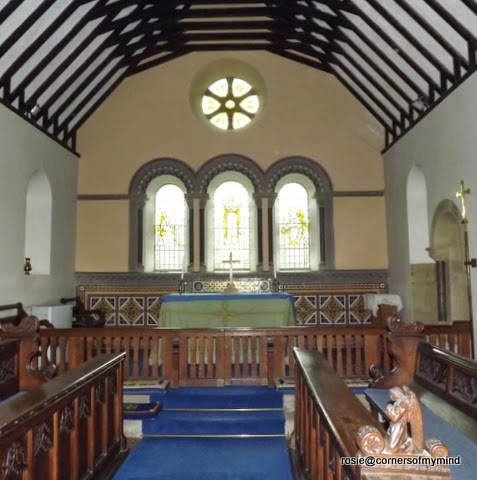 The stained glass in the east window caught my eye 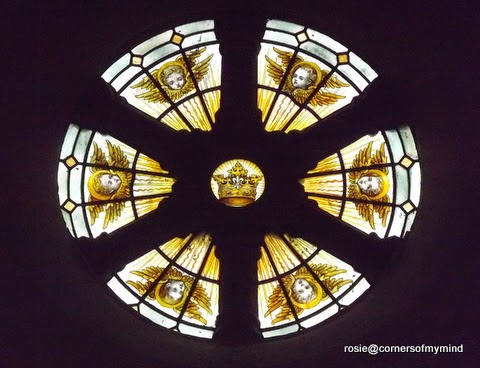 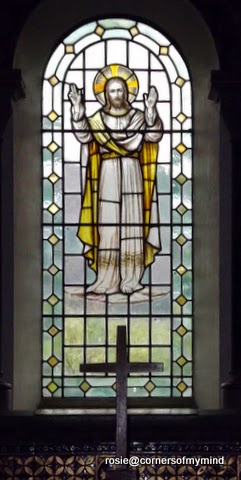 As did the alabaster tomb in the side chapel 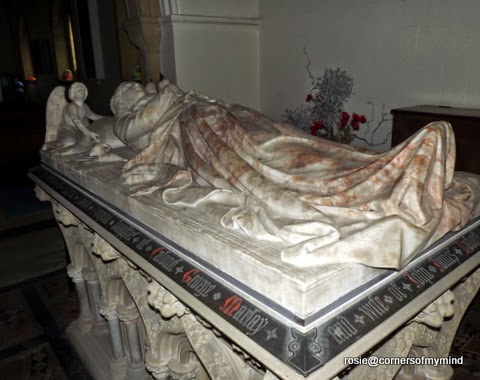 It is the memorial to Lady Catherine Manners the first wife of the 7th Duke of Rutland. 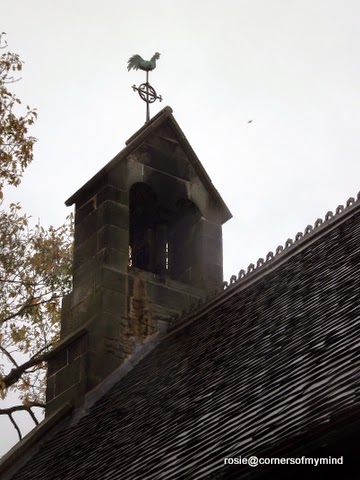 I did read something in the church about the bell turrett but I've forgotten what it said and I didn't make a note of it but I'm sure it said that the bell that was up there was originally in the chapel at Haddon Hall and was returned there in 1929.  I can't find anything on line about it so I can't check that this detail is accurate. 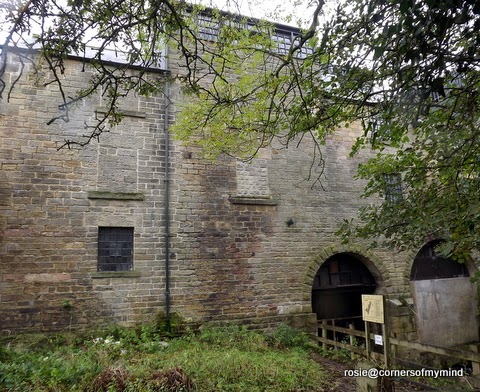 We then walked back down into the village and across the A6 and into Caudwell's Mill.  I've taken you to the mill before in several posts as we often stop off here for flour and I can't resist the gift shop as it has some wonderful things for sale - pretty pottery, jewellery, books and greetings cards as well as many other decorative and seasonal items.  We needed four birthday cards as we have several birthdays over the next few weeks amongst family and friends but I also ended up with a lovely mobile of foxes and pumpkins which is just right for decorating the conservatory for this season - I'll show you this in a later post. 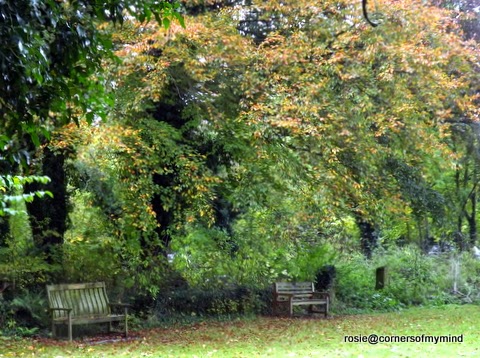 Too wet to sit outside for a picnic so we went back to the Peak Shopping Village for coffee and a cheese scone.  They do have a cafe at Caudwell's Mill too and we've had lovely food there on several occasions. 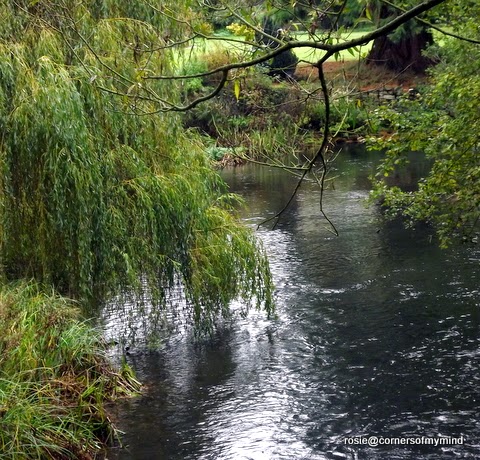 Before we returned to the car we stood on the bridge near the mill and looked at the River Wye as it meandered down to meet the Derwent.  Rowsley is such a pretty village and we are guilty of passing through or just stopping off at the mill for flour or occasionaly at the shopping outlet but this time we had a good explore.  There are probably some corners we still haven't seen but I feel I know the place a little more now than I did before.

It's time to go out in the garden and 'batten down the hatches' ready for the winds and rain that have been forecast.  It is hard to believe that this morning I was out in a tee shirt  (no jacket required!) washing down the car after it got so muddy yesterday - but where we went to get so muddy is also, like the fox mobile, for a future post.
Posted by Rosie at 2:54 pm