Before our holiday in Scotland we visited friends in Nottingham and after a lovely lunch we joined a group of friendly and enthusiastic people for a Heritage Tour of the St Anns Allotments in the city. 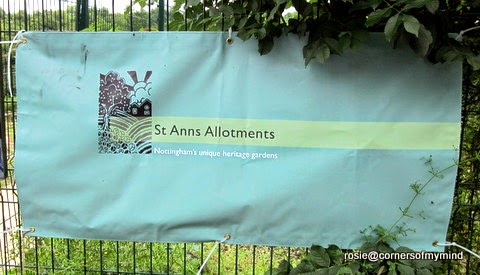 If any of you are thinking there is a missing apostrophe - like I was - I've checked both their website and my photos of their banner and that is how it is spelt. 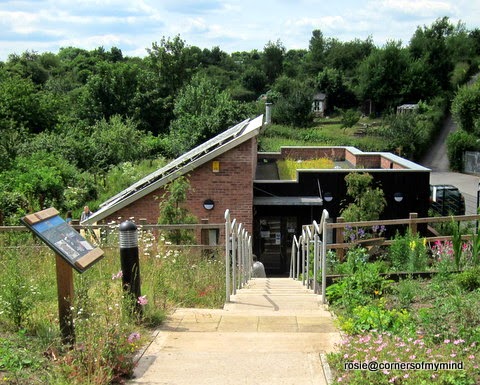 We all gathered outside the visitor centre with our guides and then made our way up towards the first part of our visit which was the community orchard. 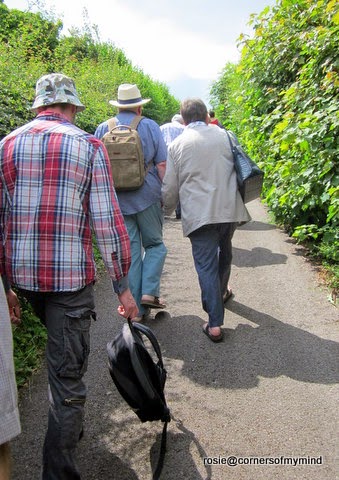 There were quite a few volunteers working in the orchard and it is where most of the community events take place - there is even a pizza oven under the trees.  Apparently they are very popular and tasty. 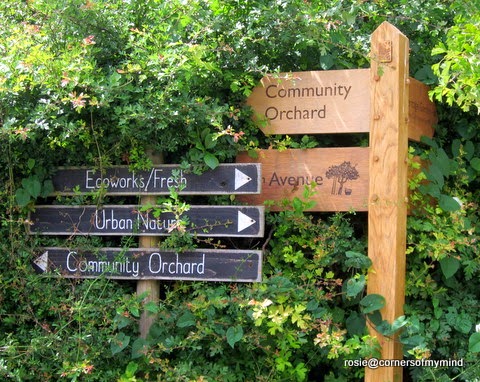 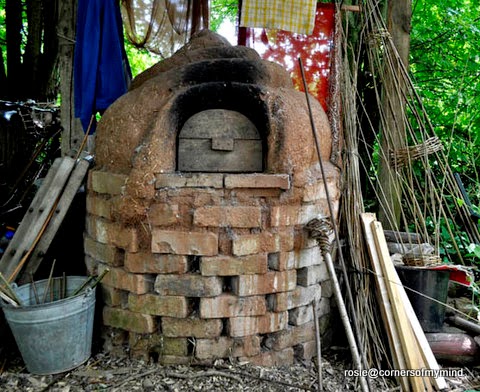 The site is quite hilly and each of the allotments or gardens are protected by walls or hedges.  The walkways in between are known as Avenues.  This idea stems from when, during the 19th century, the allotments were gardens for the professional and white collar worker families who had moved to live and work in the fast growing city.  A place where they could escape and sit in their garden and take afternoon tea.  Many of the plots still have all or part of the original summer houses.  Formerly known as the Hungerhill Gardens these are the oldest and also largest of this type of Victorian detached gardens and as such are granted a Grade2* listing by English Heritage. 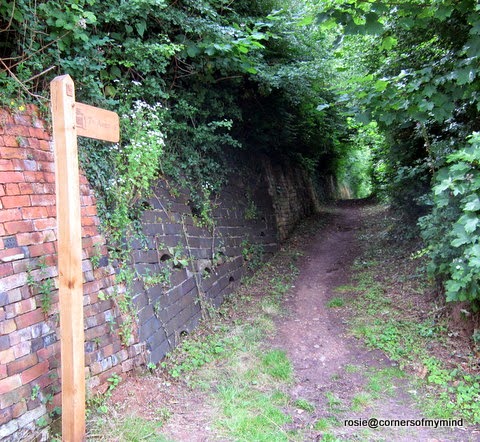 Apart from the community areas most of the plots are private.  We were invited to visit one plot which had one of the old summer houses at the end.  Charlie's plot was full of interesting flowers and vegetables, also chickens, rabbits and guinea pigs which, he told us, belong to his grandchildren. 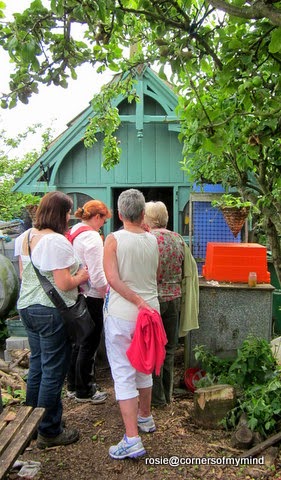 As you can see it was a very warm afternoon and it seemed to get warmer as we climbed higher to reach the furthest point of the tour - The Heritage Garden. 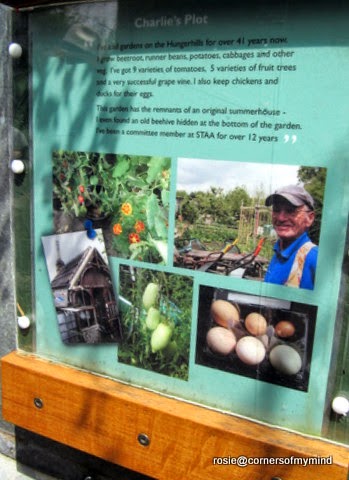 The Heritage Garden was also known as Oliver's Plot, named after the last person to own and maintain it, a Mr Tom Oliver. 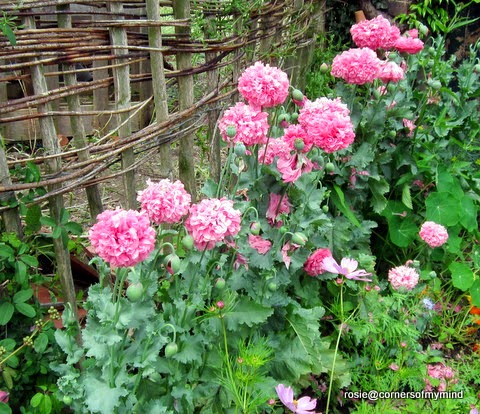 The Heritage garden was right at the top of the hill and had been set out in various eras including a Dig for Victory second world war area. 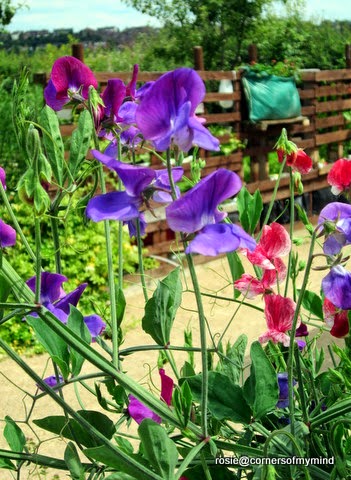 There were some lovely flowers in the garden including sweet peas, peonies, snap dragons and cosmos as well as an abundance of vegetables, a pond, work sheds and greenhouse. 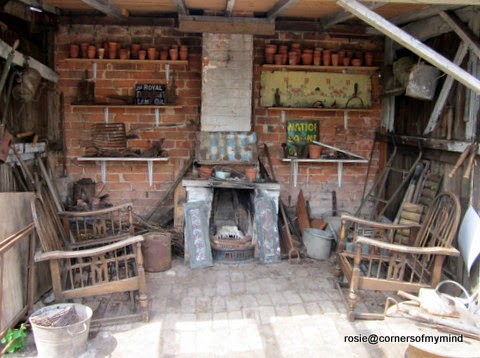 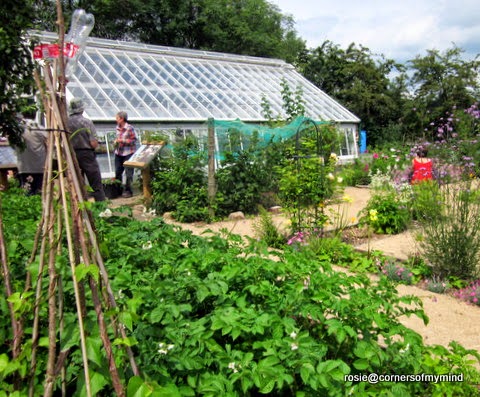 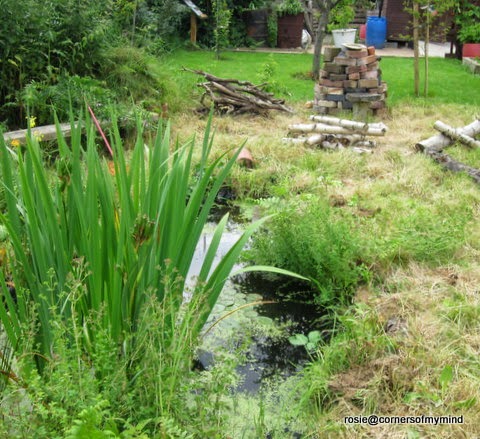 The gardens are a haven for wildlife.  There were damsel flies buzzing over the pond and many birds and butterflies about too.  Next weekend 18/19/20 July is a Wildlife weekend with moth trapping, pond dipping, bee and butterfly identification and bat and bird walks.  Such a lot of wonderful wildlife right in the city centre. 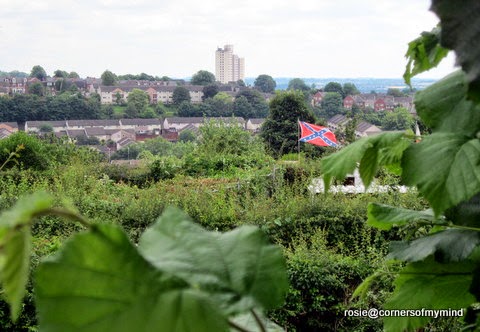 Above is a view across the allotments or plots to towards the city centre.  There have been garden plots and common lands on this site for around 600 years.  During the 1840s they became popular as pleasure gardens and were used as I mentioned above by workers from the city as a space where they could enjoy garden life and grow their own flowers and vegetables.  The guide told us that flowers were grown far more than vegetables and later, in leaner times,  grown to send to the cut flower markets across the country. 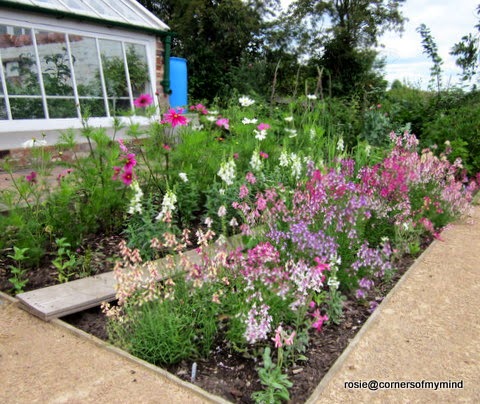 Apparently there are 670 individual garden spaces across the three sites which make up the allotments - Hungerhill Gardens, Stonepit Gardens and Gorsey Bank Gardens. 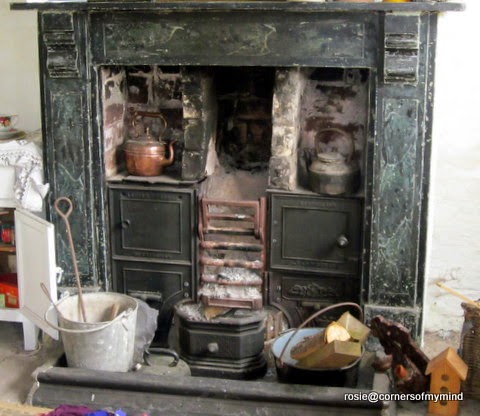 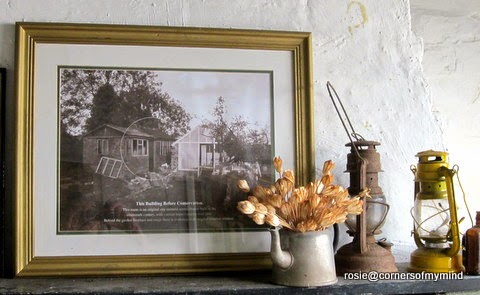 Below is the restored Victorian greenhouse in the Heritage Garden 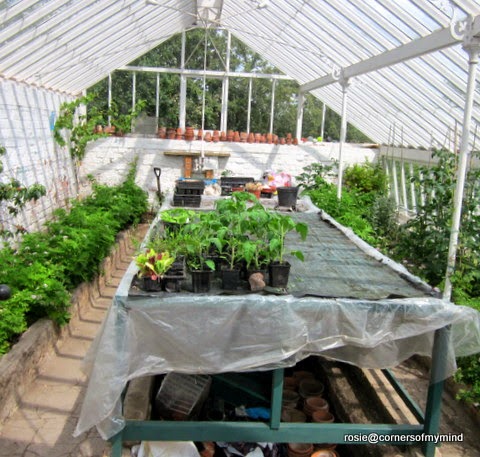 After spending some time in the Heritage Garden we made our way slowly back down one of the hedge lined avenues past the community Orchard and back to the visitor centre.  The tour took about one and a half hours and was relaxed, informative and I think enjoyed by all.  If you live fairly locally and get a chance to visit on another tour day I don't think you will be disappointed as you get a great sense of the gardens of the past whilst appreciating the lively, community lead gardens of the present day.
Posted by Rosie at 6:56 pm