The Things We Rely On

Earlier in the week I was using the vacuum cleaner on the upstairs carpets.  I kept switching on and off, as you do when you have to stop to move something out of the way, or when meticulously avoiding the deaf cat who used to be terrified of the sound the cleaner makes but now doesn't know you are right behind her with one of her worst fears, when low and behold, I switched it on - nothing!  I tried again, no response!  I checked the plug hadn't been pulled out of the socket - it hadn't.  I unplugged it and plugged it in again - nothing.  I emptied the cylinder over the wheelie bin in quite a breeze and got half of it back in my face, I cleaned the filter with the little brush, put everything back, switched on - nothing!  Paul then checked the plug to see if the fuse had gone, it hadn't.  It looked as if a new  cleaner was needed.  We looked at lots of websites to see what was available and that got me thinking about vacuum cleaners and I remembered a book I've had for ages about the history of them and other household appliances we now can't manage without. 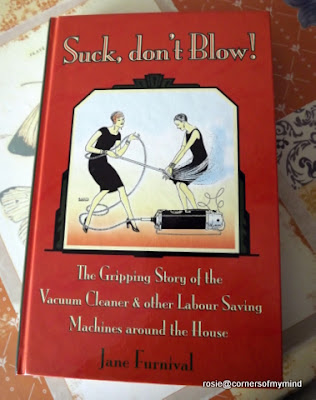 This is a super little book and the development of the vacuum cleaner makes for interesting reading.  Apparently, so the author tells us, the suction vacuum cleaner nearly didn't happen at all because their inventor, Hubert Cecil Booth, nearly choked to death on a mouthful of dust whilst testing his theory that to get the dust out of a carpet you needed to suck the dust up from the fibres and not blow it out from the fibres.  He had seen  a machine demonstrated that was intended to clean railway carriages by blowing air and raising the dust in the hopes it would land in the attached box.  Booth thought that the dust was better sucked out than blown out and he patented his first vacuum cleaner in 1901and launched the British Vacuum Cleaner Company to produce what he called 'The Puffing Billy' which was a red horse drawn machine much like an early fire engine.  It needed several uniformed attendants to work it and it was hired out to owners of fashionable houses who loved to be seen by their friends and neighbours with the red machine outside their homes. A sign both of cleanliness and wealth. The first vacuum cleaner I remember as a little girl in the 1950s was a grey cylinder one with Goblin written on the side.  I think the fact that it had something to do with a goblin used to intrigue me!  Incidentally, Goblin vacuum cleaners were also produced by Hubert Cecil Booth's British Vacuum Cleaner Company from the 1930s onwards.

That isn't the end of the story! The next morning I plugged my hairdryer into the same socket I'd used for the vacuum cleaner - nothing!  Oh no,I thought,  not the hairdryer as well and then the penny dropped!  After all that it wasn't any of the appliances that were at fault it was the socket on the wall!
Posted by Rosie at 2:54 pm