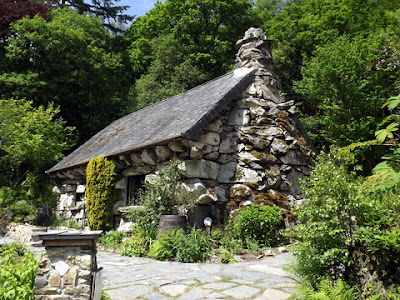 I don't think it is ugly at all in fact it is quite charming!  Legend has it that it was  a 'ty-unnos'  or 'a house built overnight '  constructed in the 15th century by two brothers who were supposedly outlaws.  I had heard of these houses that were built over night the rules being that if you could build a house with roof, walls and a smoking chimney between the hours of sunset and sunrise you could claim the freehold. 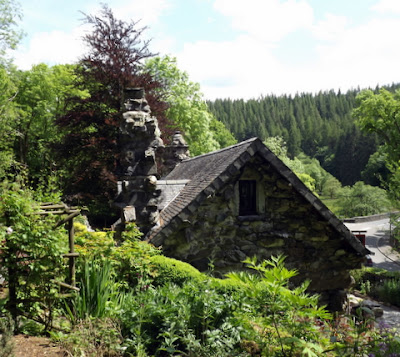 There is of course another explanation for the existence of the building and that is that the cottage was built in the early 19th century when the art of the 'picturesque' was fashionable and given the picturesque movement was deeply into ruins, follies, mountains and rivers and also knowing that the area in which the cottage was built is close to Capel Curig and Swallow Falls this does seem quite feasible.  Another explanation is that it may have been used and added to haphazardly by navvies working on the new Telford roadway and bridge being built nearby and abandoned as soon as it became too far away from the work. 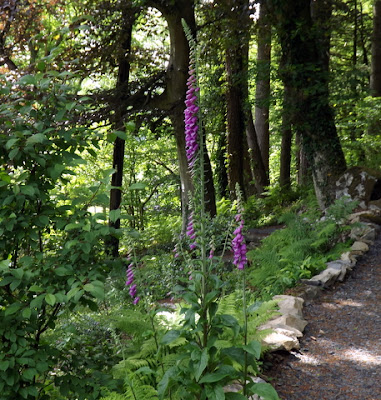 Whatever the explanation of its origins may be it was certainly listed as a curiosity in tourist guide books of the nineteenth century.  In 1929 it was bought by a well known local couple called Riley who turned it into a home and used to entertain both friends and curious passers by with stories.  After they had both passed away the cottage became an antique shop and tea room.  In 1988 it was bought by the Snowdonia Society and used until recently as their headquarters.  What makes the cottage even more enchanting is the woodland walk and pond, which was teeming with little frogs and damsel flies and garden which is planted to encourage honey bees.  There is also a project to encourage, by using bird boxes, birds such as pied flycatcher and tits.  We saw a couple of pied flycatchers taking food into the boxes for their young and the garden was humming with bees. 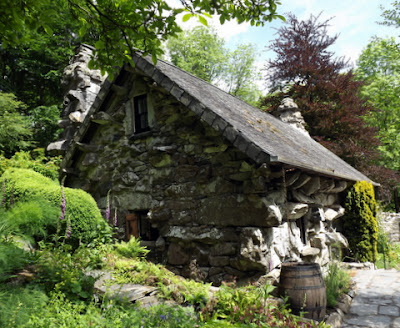 So what is the interior like?  We were able to go inside and found a lovely, newly opened,  tea shop with charming ladies serving pots of tea in mis-matching vintage china cups and saucers and plates full of the most tasty Bara Brith.   I wish now that I had taken a photo of the interior but it just seemed too intrusive at the time.  There was also a small shop selling local produce especially preserves and honey.  This is a joint project between the Snowdonia Society and the National Bee Keeping Centre for Wales.  I hope it is successful for the bees and pied flycatchers of course but also for us curious visitors in need of refreshment.
Posted by Rosie at 11:42 am