On to part three of our visit to New Mills.  After our visit to the Heritage Centre and our walk around the town which included a visit to both the indoor and outdoor market and a browse in the bookshop - we can't not browse in a bookshop if there is one to be browsed in - we headed back down the path and steps to the  valley towards the ruins of the Torr Factory and the viaducts over the river. 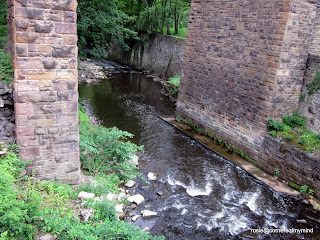 I loved the atmosphere down here - surrounded by the ruins and the tall viaducts.  It felt protected and had a quiet magnificence about it - almost like being in the ruins of somewhere very ancient; like an old abbey or stately home. 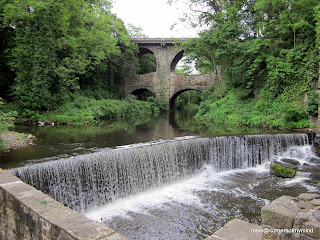 I think industrial buildings have an appeal and grandeur all of their own. 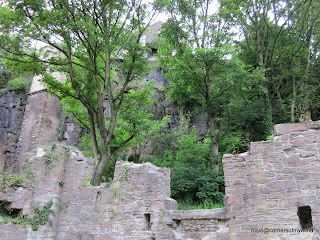 These are the ruins of the old Torr Factory built around 1790 for the Schofield family and originally known as Schofield's Mill.  It was destroyed by fire in 1838 and rebuilt with the addition of a steam engine in 1846.  Cotton production stopped in 1890 and the mill became a fustian cutting firm until it was again destroyed by fire in 1912. The area alongside the river is known as The Riverside Park and also as 'the Park under the town'.  We are hoping to visit again before too long and walk along the Sett Valley trail to the village of Hayfield. 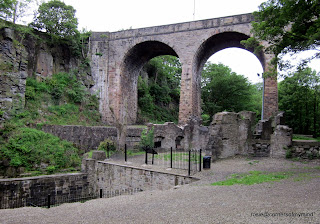 Below is the Torrs Hydro-Electric plant.  It is the first community-owned plant in this country and produces enough energy to supply the local Co-op supermarket  with any surplus being re-sold to the National Grid.  It uses the power of a small weir in the gorge and is known as 'Archie' because it uses a device known as a 'Reverse Archimedes screw'. 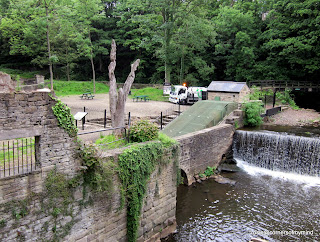 In case you were worried about the fish in the rivers getting caught up in the device there is apparently a 'fish-pass' under the steps to the right of the screw turbine. 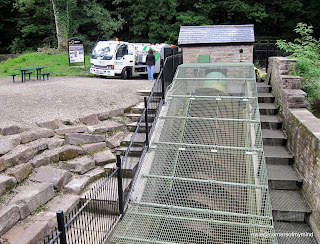