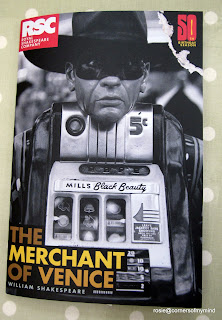 Here is my review of  'The Merchant of Venice' seen last Thursday evening at the Royal Shakespeare Theatre, Stratford-upon-Avon.
After a wonderful meal in the theatre's Rooftop Restaurant we had time to wander around and look at the new parts of the theatre and in the shop before making our way to our seats.  The seating was comfortable and close to the new stage so we had a good view of all the action.  The inside is totally different than how it used to be with its new thrust stage and tiered seating.

Photos weren't allowed in the auditorium so I can't show you what it looked like.
As we entered the auditorium some of the actors were already on stage in a set resembling a Las Vegas gambling club with loud brassy music, black jack tables, cocktail bars and one-armed bandits.  The merchant, Antonio, sits gloomy and desolate at one of the gaming tables, whilst the rest of the club goers are having a great time.
This was, in fact, one of the most unusual and thought provoking productions I have ever seen.  The play, directed by Rupert Goold, seemed to me to be split into three distinct sections.   The scenes with Antonio, played by Scott Handy and Bassanio, played by Richard Riddell were in and out of the clubs and coffee bars of Las Vegas where ducats became dollars and the character of Launcelot Gobbo was an Elvis impersonator.  When Jessica, Shylock's daughter and Lorenzo elope they do so dressed as Batman and Robin.
The 'casket' scenes where Portia's suitors have to pick the right casket (Gold, Silver or Lead) containing her picture to win her and her fortune was turned into a television game show with Portia ( Susannah Fielding) and Nerissa (Emily Plumtree) as the ditsy presenters all platform shoes, short skirts and false smiles for the cameras.  Think 'Legally Blond' here and you just about have it.
Then there is Shylock, played so wonderfully by Patrick Stewart,  he sometimes seemed as if he were in a different play entirely, distanced from all around him - as I guess he would have been as one of jewish faith in a mainly christian society -  he went from cunning money lender to a frail, elderly old man, who wanted his revenge.
The American accents slipped occasionally but the timing was perfect - especially the scene in the lift!  The courtroom scene was dramatic with Antonio strung up on a meat hook gasping with fear as Shylock took his knife from his case to take his 'pound of flesh'.  I was waiting for 'the quality of mercy' speech from Portia and wondered how it would be done - very well as it happens -  and the ending, after the giving away of the rings,  was unsettling as Portia, realising that Bassanio will always love Antonio more than her, whorled around the stage on one platformed shoe as she descended into madness accompanied by the Elvis impersonator singing 'Are you lonesome tonight?'. 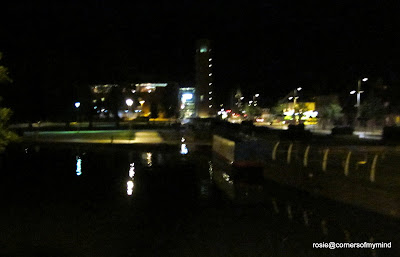