Ever since I first visited Lyme Regis in 1980 I've been fascinated by both its literary and geological connections. I must admit I initially wanted to visit because of Jane Austen's Persuasion and was enchanted to find the little bow windowed houses and the wonderful harbour wall known as the Cobb from which Louisa Musgrave fell in Austen's story. A visit to the local museum however opened up another fascination for me in the life and work of the well known fossil collector and dealer Mary Anning. 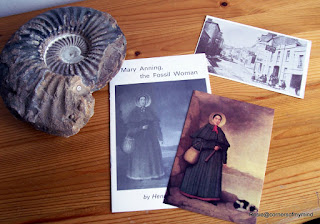 Whilst on that first visit I bought the little book and postcards in the photo above and have kept them all this time. Of course, over the years, I've read in other books about the life of Mary Anning - books like Deborah Cadbury's The Dinosaur Hunters. 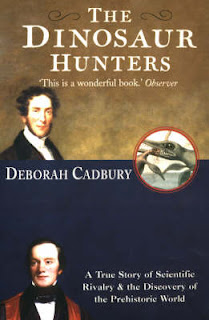 Mary's life was a harsh one! She and her brother Joseph were the only surviving children of the 10 born to Richard and Mary Anning. As an infant she was struck by lightening- an accident that changed her completely. Her family weren't well off, her father was a cabinet maker and fossil enthusiast; Mary followed in his footsteps and from early in her childhood was able to spot and collect fossils from the beaches in and around Lyme. Her father died when she was still young and Mary took over as the main hunter of fossils whilst her family sold the fossils from their house in Cockmoile Square. Mary collected things like ammonites, Belemnites and sea urchins to clean and sell. 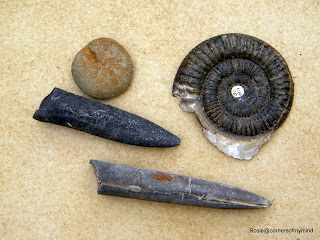 She came to the attention of many of the scientists and collectors of the day including The Reverend William Buckland, Henry de la Beche and the Reverend William Conybeare. As she scoured the beaches of Black Venn and the Undercliffe with her faithful dog, Tray she found some of the most startling and interesting fossils. As well as finding the remains of creatures now known as ichthyosaurs and plesiosaurs - at first thought to be ancient crocodiles and turtles - she also discovered the first complete pterodactyl, or pterosaur as they are now called, in the UK. 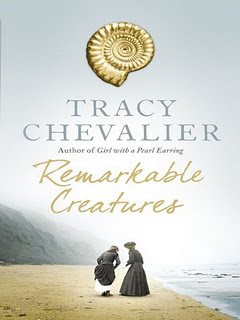 Imagine then my delight to find a new novel written by Tracy Chevalier about the life of Mary Anning. This book covers Mary's young life and her friendship with the Philpot sisters and in particular Elizabeth Philpot who was herself a collector of fossil fish. The Philpots had moved from London to Lyme about 1805 (missing Jane Austen, who visited in 1804, by a year) and were soon drawn into the social life of the town. The Philpot Museum in Lyme was built in 1901 on the site of Mary Anning's first home by Thomas Philpot the sisters' great nephew as a memorial to their life and work in Lyme. 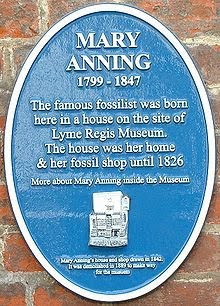 Tracy Chevalier's 'Remarkable Creatures' brought Mary to life for me. It is written in the first person a chapter each in the words of Mary and Elizabeth covering the same events in time from differing viewpoints. She has captured society's restrictions on both Mary Anning and the Philpot sisters so well. Mary, of a lower class to the Philpots, was disapproved of by their servant Bessie. The genteel sisters - non of whom would marry - the cards and dancing at the assembly rooms, the interest in botany, art and drawing and collecting fossils; the making of salves and lotions to distribute for presents. It was Mary who worked so much in what was then considered a man's world - roaming the beaches of Lyme, hacking out fossils, cleaning them in the family basement and dealing with the gentlemen collectors and dealers as well as the geologists and scientists with whom she became acquainted over the years.

Mary's work was finally acknowledged when, just a few years before her death in 1847 she was granted a modest annuity raised by members of The Geological Society and others even though women were not admitted as members at the time. Mary left Lyme only once in her life to visit London. She is buried in the churchyard at St Michael and All Saints, Lyme where there is also a window dedicated to her and her work, paid for by the Geological Society.

It is said that the 'tongue-twister' whose first line is 'She sells sea shells on the sea shore' was inspired by the life of Mary Anning - hence the title of this post.

Waterstone's Review of Remarkable Creatures - link
Posted by Rosie at 10:08 am