As we drove home after our walk along the Monsal Trail we diverted slightly to visit the village of Bradbourne near Ashbourne and in particular to visit the parish church to look at the ancient Saxon cross in the churchyard. We had also hoped to see the standing stone* which was supposed to be 200 metres north of the church; we followed the footpath from the churchyard, through the trees but we couldn't pinpoint it exactly and weren't sure what was footpath and what was private land so unfortunately we didn't find it. 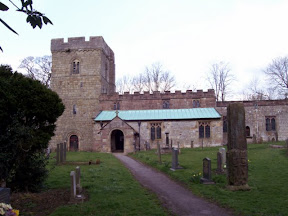 The parish church of All Saints is a beautiful Norman structure set on high ground surrounded by lovely countryside and farmland. The village of Bradbourne was mentioned in the Domesday Book of 1086 as having a church and a priest and there are apparently one or two remains of the earlier church inside the present one including in the base of the tower. Before the church was built worshipers would have gathered around a stone cross and here is the Saxon Cross just near the entrance to the churchyard. 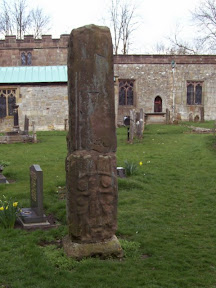 From this angle you can see the carvings on the side as well as the front aspect. The cross has been dated at about 800AD and the front carving apparently depicts the crucifixion. This part of the cross was found being used as part of a stile and was rescued and placed in the churchyard. In the photo below you can also see the Elizabethan Manor House which stands behind the vicarage. Across the road from the church on the hill beyond are the earthworks of the deserted medieval village of Lea Hall. 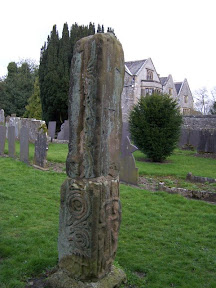 The door in the tower is beautiful and a fine example of its kind. The carving over the door is said to be late Norman. 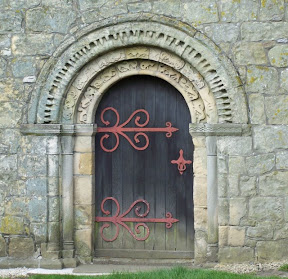 Below is a closer view of the stone carving. 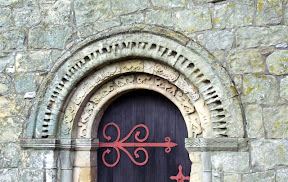 This small door is on the south side of the building nearby are some of the earlier gravestones in the churchyard. 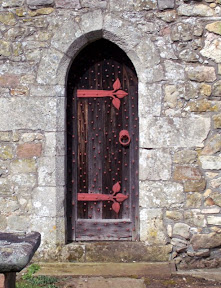 Behind the church is the grave of one of my favourite actors, Derbyshire born Alan Bates. I remember seeing him as Hamlet**at Nottingham Playhouse, when I lived there in the early seventies. I remember too seeing him in the city with his beautiful red-haired wife and two baby boys who were born in Nottingham whilst he was working at the theatre. His wife and one of those twin boys are buried in the churchyard too. So sad but such a beautiful place to rest. 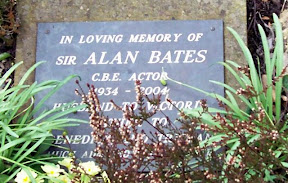 *When we got home we looked for the standing stone on Google Earth and found what we thought was probably it a lot further away, at least 400 metres, than we had thought and quite a way from the designated footpath.

** It was in the rep season of 1970/1971, I've just found the programme amongst my collection. Celia Johnson played Gertrude. I have to admit although he was a great film actor he wasn't the best Hamlet I've seen over the years - that award goes to Sir Ian Mckellen, followed closely by Alan Rickman.
Posted by Rosie at 3:21 pm