The Play's the Thing

It was pouring with rain as we drove into the car park at the New Vic, a warm, steamy kind of rain that had people dashing quickly into the dry welcome of the theatre foyer. We'd booked a table for a meal before the performance mainly because, as Paul works close by, it was easier to park early than for him to come all the way home and then to struggle to find parking later on, so I met him there. I was looking forward to this production, having seen quite a few by Northern Broadsides over the last few years I knew we would be captivated once more. As we found our table and joined the queue to order our food several of the cast members were in front of us ordering theirs, including the director Barry Rutter and Othello himself - Lenny Henry. 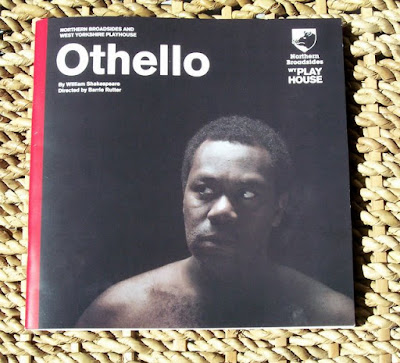 When I heard that comedian Lenny Henry was to play Othello for Northern Broadsides I wasn't sure what to expect but my faith in his abilities to pull it off were not in vain. He was a tremendous Othello. He has a huge presence on the bare, almost propless stage, just occasionally speaking his words a little quickly but oh, the gamut of emotions he went through as Othello spirals from strong, happy, dynamic soldier through tormented jealousy and rage to remorseful defeat was absolutely riveting.

My star of the evening, though, was Conrad Phillips who, as Iago, was the malevolent lynch pin of the whole production; on stage for almost all of the three hours of the production, he plotted and whispered and cajoled leading all the characters into his web of cruel deceit.

It wouldn't be a Northern Broadsides production without a bit of music and a bit of comedy and this was supplied by the actors themselves playing the instruments, with music written especially for the production by Conrad Phillips. The 'drinking' song used in order to get Cassio, played by actor Richard Standing, drunk was very funny and received a huge ovation at its end.

I always have trouble with Desdemona as a character and she was superbly portrayed by Jessica Harris and but for me, it was Maeve Larkin as Iago's wife Emilia who stood out giving a fine, measured performance. Not surprising then that the cast received a standing ovation as they took their bows at the end.

All in all a wonderful evening, I would say catch it if you can but unfortunately - well not for the theatre or the company of course - the run at the New Vic is completely sold out.

Edit30/4/09 - I forgot to mention that the New Vic is a 'theatre in the round' not a 'proscenium arch' theatre so the action all took place on a central, empty stage with props being brought in and out by the actors and some of the action taking place on the steps between the banks of seats. As we were on row B - second from the front we were almost involved in the action, in fact the lady front left of me ducked when Othello sent his dagger flying straight into his map board placed next to where she was sitting and I must admit that when a trumpet blew out, to herald that the battle was won, from the steps behind us I nearly hit the ceiling!
Posted by Rosie at 11:55 am