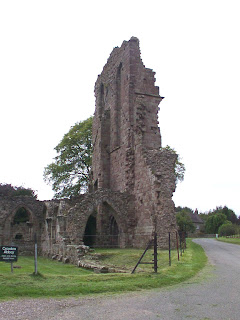 About 10 miles away from where we live can be found the impressive ruins of Croxden Abbey. The abbey was founded around 1179 by Bertam de Verdun, Lord of Alton for the Cistercian order of 'white monks' who came from Normandy in France. Quite a lot of it still stands including the imposing remains of the 13th century church.

It is the most atmospheric place. Serene and tranquil in it's rural setting with just sheep grazing in and around the ruins.

The Monks who lived here bred sheep and made a good income from wool production. They lived in peace with their surroundings for 350 years until the dissolution of the monasteries during the reign of Henry VIII.

When the Abbey was in it's infancy the community of monks were French but the first Abbot, Thomas of Woodstock, was an English man. When the Abbey was finally closed in September 1538 there were still 12 monks and an Abbot living there, probably the same number of residents as in it's first years.

Bertam de Verdun founded the Abbey for the purpose of the salvation of the souls of himself, his wife, his mother and other family members. The plan for the Abbey was based on that of the 'mother-house' at Aulney-sur-Odon. Many of the 13th Century additions were instigated by Abbot Walter of London.

As you can see from the photo above the road cuts through the abbey site, parts of the huge west wall of the abbey stand almost on the road side giving a good idea of how tall the building was.
Below is a book engraving of Croxden Abbey (courtesy of Staffordshire Archives and English Heritage) which shows what the ruins would have looked like at the end of the 18th Century.

The Abbey is now in the hands of English Heritage and is open all year round 10a.m. -5p.m. and there is no admission charge.
Posted by Rosie at 2:32 pm