1. The Easter Weekend passed by so quickly.  The weather was good, we managed a walk each morning in the bright sunshine and blustery winds.  The snowy, sleety weather forecast for Monday actually came to us on Tuesday but didn't stay long. 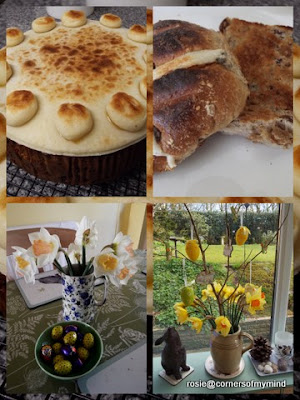 2. It's so good to have open spaces within walking distance of home and between us and the city centre where we can take a breath of fresh air. 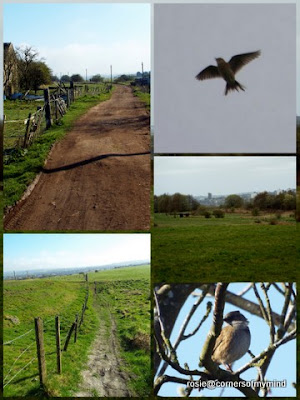 On one of our walks, down the lane and across the fields we spotted two wrens, a dunnock, a robin, many crows, magpies and  gulls, a kestrel and a skylark.  Paul took the photo of the skylark.
3. On Monday evening around 6.30p.m. I was looking out of the kitchen window whilst washing the pots and a fox ran across the lawn carrying in her mouth what I at first thought was a cat but quickly realised it was a fox cub. 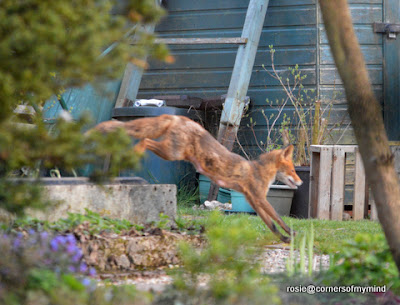 I shouted Paul to bring his camera as I had a feeling she was moving dens and that there may be more cubs to retrieve.  She carried three more across the garden so we now know there are four cubs.  One more than last year. 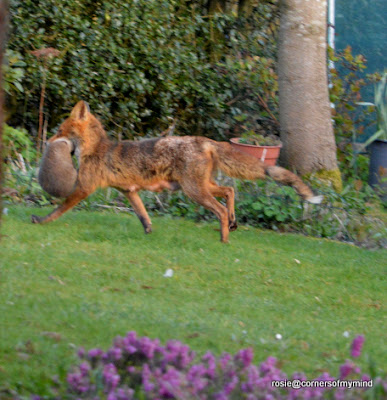 I don't know what happened to make her move her cubs across two or three gardens but she must have felt threatened or in danger to be out in the light of day.   It took her about a quarter of an hour to rescue them all, rushing backwards and forwards at full pelt.  They now seem to be back in the old den across the hedge in a wild area at the back of the school.
4.  Just down in the town at the Gladstone Pottery Museum, which recently featured on channel four's 'The Great Pottery Throwdown', more filming is happening.  This time it is a Sky original film about Clarice Cliff.  Called 'The Colour Room.'  It is about her early years and her rise to fame in the 1930s with her colourful 'Bizarre' ware.  Apparently the two lead roles have gone to actors from Downton Abbey and Bridgerton.  I don't know if I'll ever see it as we don't have Sky, perhaps it will become available on other sources eventually.
The photos below were taken in August 2009 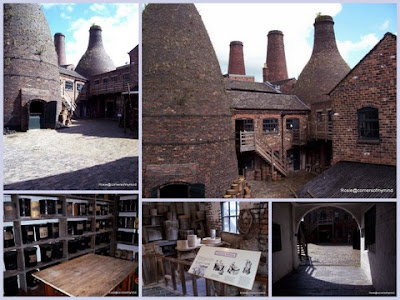 5.  In a rainy garden plants are coming to life 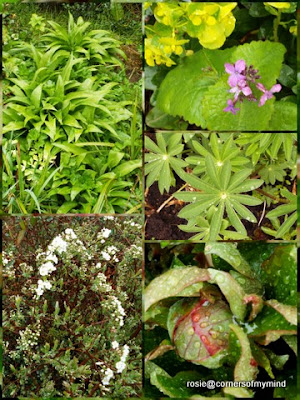 Honesty, Lupin, Spirea, Peony and Wild Garlic.  The strawberry plants are again looking fresh and green and there is a hint of blossom on the plum tree but we have lost a Ceanothus plant from the front garden, it was one of those low, creeping ones with  pretty pale blue flowers.  We now have a big space to fill.
Posted by Rosie at 9:48 am