I'm returning to mid August this year and the last of the buildings I promised to write about in my post of 2nd September. I think I've taken you here before on one or two occasions but I thought I would write another post as one of our favourite places Donington le Heath Manor House has undergone refurbishment and many changes and has re-branded itself as The 1620s House and Garden. 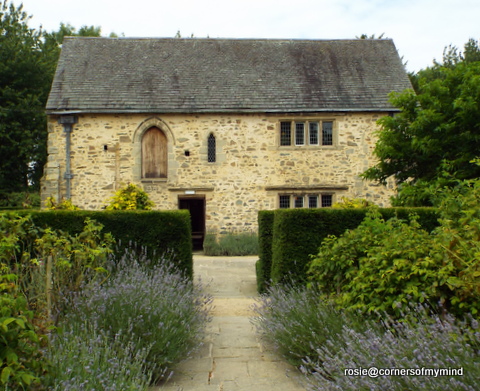 Built as early as 1290 it is one of the oldest houses in Leicestershire and has a long history as a family home.  It is now cared for by Leicestershire County Council. 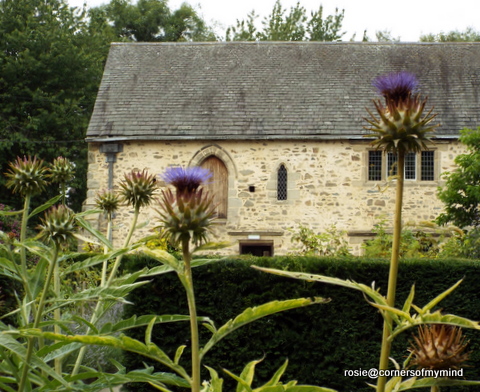 From the 15th Century onwards it was owned by the Digby family and they were the family that started the modernisation of the house around 1618 which turned the building into the structure we see today. 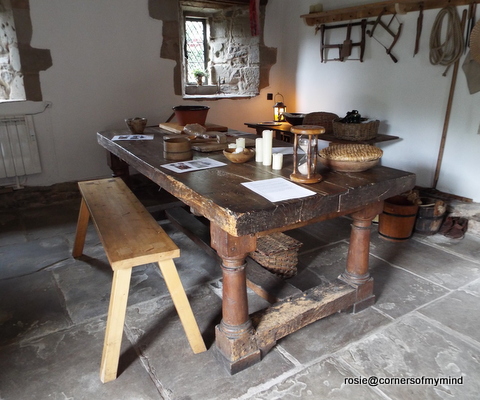 The first thing I noticed as we arrived was that there is now a reception kiosk near the gate of the car park and what was originally the reception area and shop has been turned back into the scullery.  This is where food coming into the house would have been cleaned and prepared ready for the kitchen. 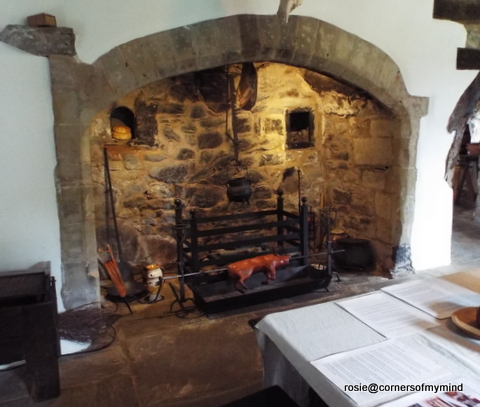 Food would have been cooked on the open fire in the kitchen, on the spit and in the little ovens you can see in the wall behind the fire.  The fire would be constantly lit and this would have been the warmest room of the house.  Both family and servants would have taken meals in here on a daily basis unless there were visitors or guests who would be fed and entertained in the upper chamber. 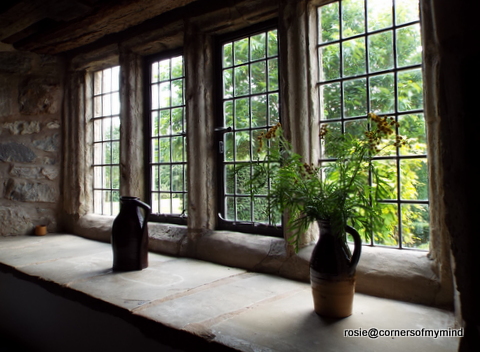 Above one of the windows in the kitchen.  I loved all the natural flower displays in replica salt glaze ware jugs. 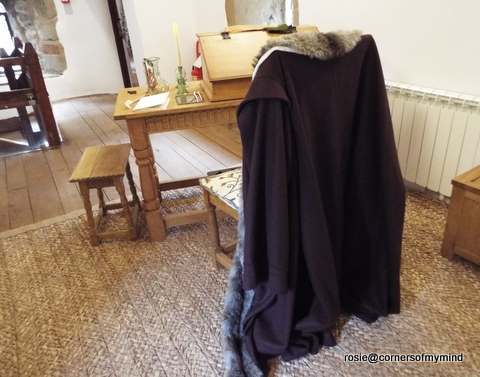 Across the well yard and up the stairs are the bedrooms and upper chamber.  The room above is a re-creation of Mr Digby's study, this room was also secretly used as a place of worship as the Digbys were still of the Catholic faith at a time when it was dangerous to be so. 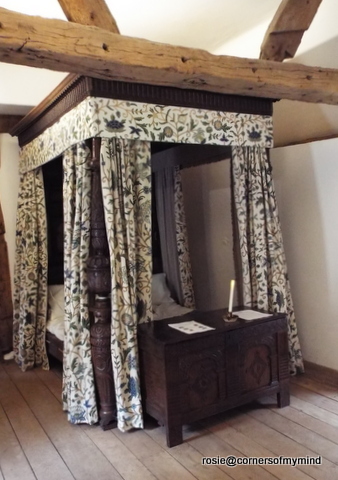 The bed above is in the corridor bedroom.  This meant that the servants, family members and guests could pass through at any time so there was a lack of privacy here unless the bed hangings were drawn.  The appearance of the bed was another change I noted as the last time I saw it it had, as far as I remember, darker and plainer hangings.  The legend around this bed which is known as 'King Dick's Bed' is that it came originally from The Blue Boar Inn in Leicester and was supposedly the bed Richard III slept in before he left the city to fight at the Battle of Bosworth.  It seems though that most of the bed dates from the late 17th century.  The hangings are newly made. 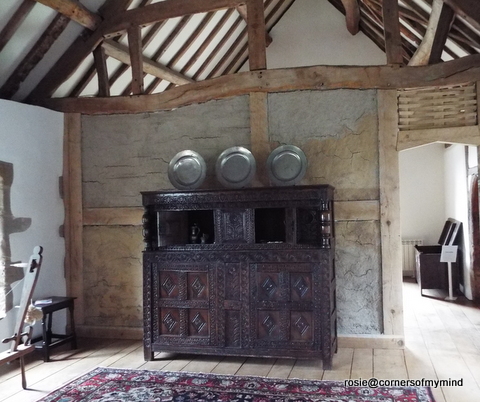 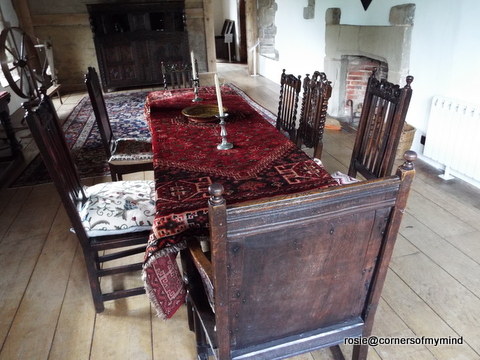 It was also used by the ladies of the house for spinning and sewing. You can see a spinning wheel at the end of the room top left in the photo. 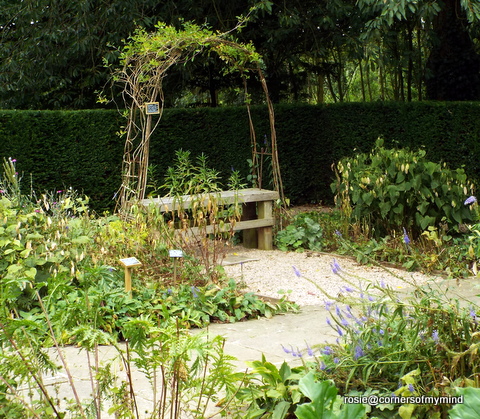 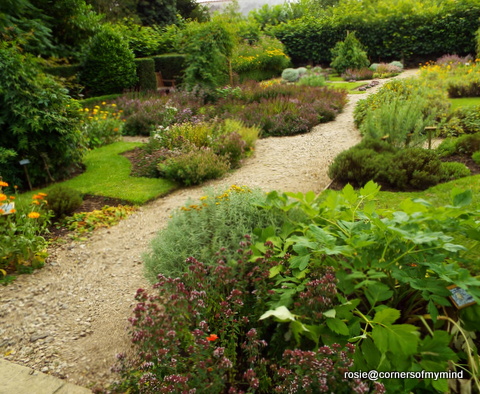 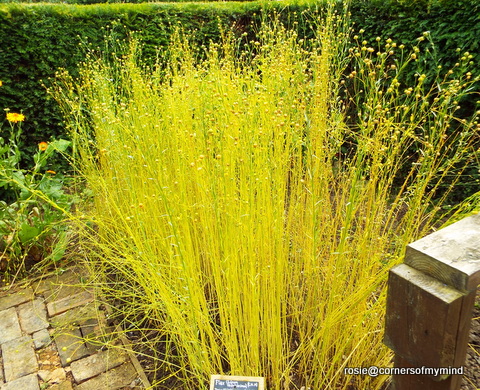 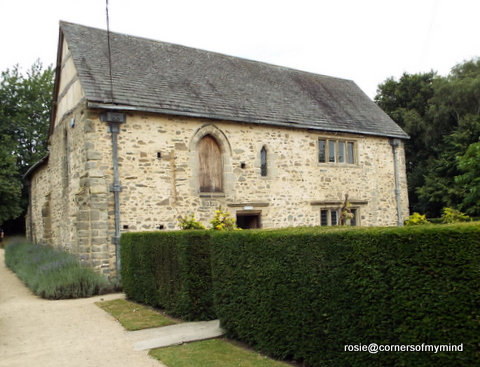 You can see the door up in the wall of the house which would have had a staircase leading up to the lobby and Great Chamber. 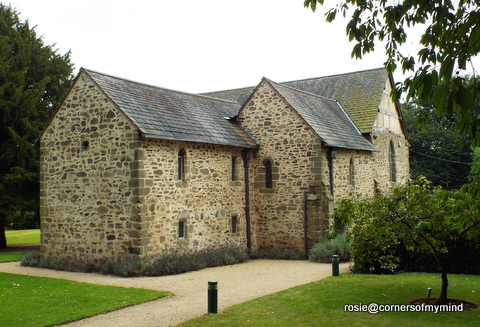 Above a  view of the rear of the house.  To the right is the ornamental maze and vegetable garden. 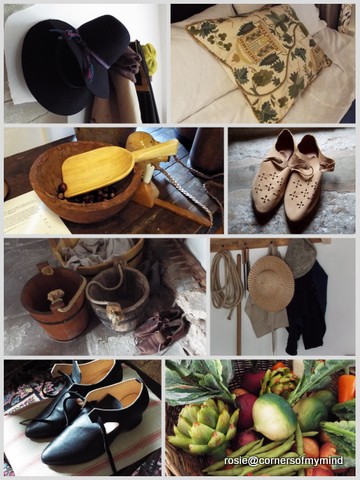 Some of the modern replicas of  objects dotted about the house that you can touch and look at more closely. 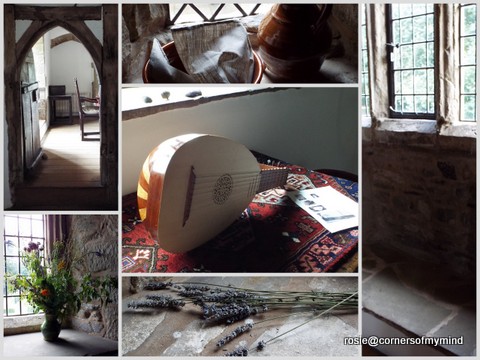 Above a few more views around the house.
Posted by Rosie at 1:37 pm